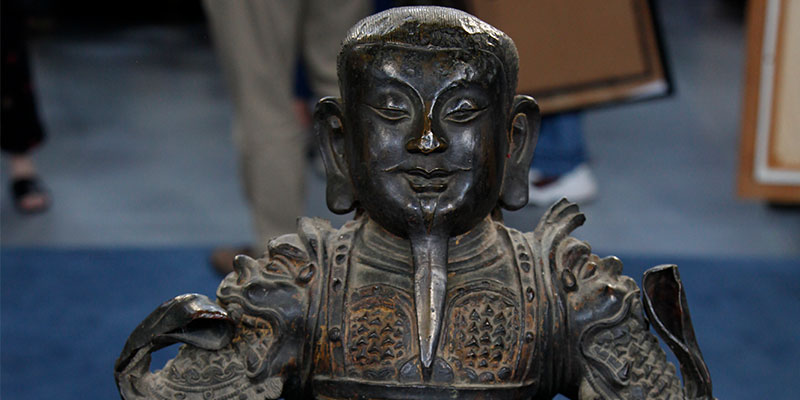 Editor's Note 6.22.15: This article was originally published in 2012 and provides an overview of the ethics and issues surrounding souvenirs of war.

When Max's father returned from World War II, after a long deployment along the India-China border, he came back with a proficiency in Hindi, stories of talking to Mahatma Gandhi, and, packed among the clothes in his duffel bag, a 135-pound sculpture of a Chinese deity. The sculpture sat on the fireplace for the following decades, serving as a hat-stand for Max's father when he came inside from milking the cows. But when ROADSHOW was coming through Tulsa last July, at his brother's prompting Max packed the icon up and brought it in for appraisal. He wasn't disappointed: Dessa Goddard, of San Francisco's Bonhams and Butterfields, estimated the statue's auction value at between $70,000 and $100,000. But how, exactly, did a GI end up with such a valuable, not to mention massive, work of Chinese art?

"Dad never said anything about how he got it," says Max, though he did mention that an Army buddy had ended up with the bottom half of the sculpture, a tortoise on which the deity sat. There's probably no reason to think Max's father and his friend came by their war souvenir illicitly. The United States was not at war with China or India, so it's not as though there was looting going on. And in any case, there were no Chinese temples in India, where Max's father spent most of his deployment. Most likely, says Goddard, the two found the statue in a damaged condition in a shop of some kind, thought it was interesting and bought it. Still, the statue does raise questions about when, and under what conditions, it's acceptable to bring home souvenirs from overseas deployments.

The laws and customs governing war trophies have undergone radical changes over the centuries. In the pre-modern world, the promise of collecting the spoils of war was often all the pay that the rank and file received. Looting is as old as war itself.

"In the past," says ROADSHOW arms and militaria appraiser Bruce Herman, "the laws were different. Nobody cared; it was like the Wild West. Some old GIs used to tell me how they'd go out at night with flashlights and break into people's homes. But if you do that now, you'll end up in Leavenworth for 10 years."

Attitudes toward looting have largely tracked with an ever-growing concern over the collateral damage inflicted upon civilians in wartime environments. As Herman points out, during World War II, both sides firebombed entire cities, killing thousands of civilians indiscriminately; that was the way wars were fought. Now, he says, any time the concussion from a precision guided missile puts a crack in a mosque or civilian structure, there is a potential for huge political fallout.

At the same time, the military's policies for bringing home war souvenirs of any kind have become quite strict. Max's father bringing a statue home from China was perfectly acceptable in the 1940s; had he attempted such a thing returning from Iraq or Afghanistan, however, the statue would almost certainly have been confiscated by Army officials or Customs, no matter how he'd acquired it.

"In the second Iraq war, there was a draconian embargo put in place after we invaded," says William Pearlstein, a New York art-law specialist. The problem was that the U.S. military had stood by while Iraqis looted the Baghdad museum, so it was keen to rehabilitate its image. "The rumor was that this stuff was filtering back to the U.S., even though that wasn't true. So the American government started seizing all this stuff, like cheesy samurai swords that had hung in Saddam's palace and toilet seats that military people were bringing home. It's one thing to shut down looting; it's another to jump all over a reporter because he brings home a trinket."

There have been many sensational cases, over the years, of countries seeking to have their cultural heritage returned from invading foreign powers. The British Museum is famously home to many such artifacts, including the Elgin Marbles, statues that were removed from the Parthenon in the early 1800s, and which the Greek government maintains should be returned to its possession. And, during both world wars, there was massive and widespread looting of art of all kinds, including, Pearlstein says, prints by the German painter Albrech Dürer.

"One moment they were in a castle, well documented," says Pearlstein. "And the next they turn up in Texas. Those stolen property cases are easy."

In the absence of documentation, though, it can be difficult for a foreign claimant to advance his case, should he or she believe an artifact has been illegally obtained and removed from the country. Max's father's sculpture is most likely in the clear. As Goddard points out, it may be valuable, but it's not a major work of art.

"There's a big difference between something like this and a Buddhist sculpture out of Xiangtangshan cave."

In the unlikely event that a photograph emerges of the tortoise and deity statue in its original setting, accompanied by a charge of wrongdoing, that could change. Issues of provenance, always complicated in antiques, are even more so when the artifact in question is foreign. In the absence of such a development, though, Max and his family should treasure their $100,000 war souvenir, and memento of their father's life, far into the future.