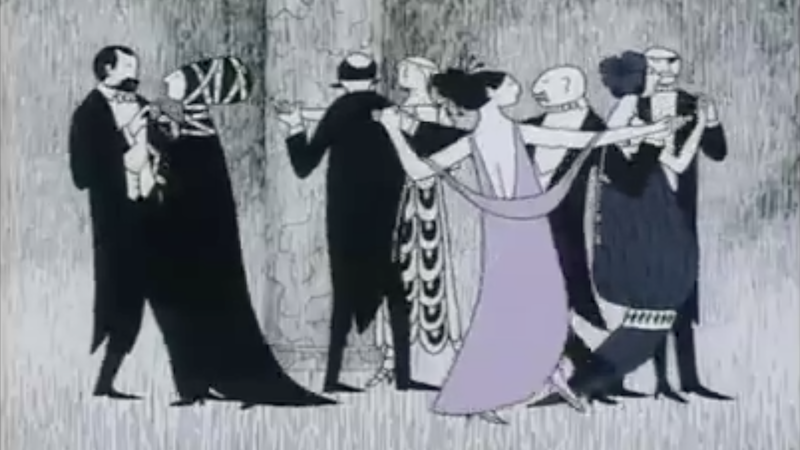 Watch a compilation of Mystery! title sequences down through the years, with animations by Edward Gorey.

At the June 2011 ANTIQUES ROADSHOW in El Paso, books expert Ken Sanders appraised a collection of memorabilia and work by the reclusive American writer and illustrator Edward Gorey. Sanders estimated the retail value of the entire collection at about $5,000.

Edward Gorey (1925-2000) achieved sizeable fame over five decades for his humorous, highly stylized, and usually macabre drawings and books — a body of work he would one day characterize as "literary nonsense."

He was the author of more than 100 books, with such delightfully peculiar titles as The Beastly Baby, The Abandoned Sock, The Loathsome Couple, The Glorious Nosebleed, and The Unknown Vegetable. The popularity of his work was further enhanced beginning in 1980, when the long-running Mystery! series debuted on PBS.

The series' opening title sequence featured animations based on Gorey cartoons that depicted amusingly ominous atmospherics — crumbling gravestones and Grecian urns, gaunt figures skulking in shadows or playing croquet in the rain under leafless trees — and other such mysterious happenings.

Take a nostalgic trip down Mystery! lane and watch this compilation clip of the series' opening title sequences, featuring Gorey's artwork, down through the years: