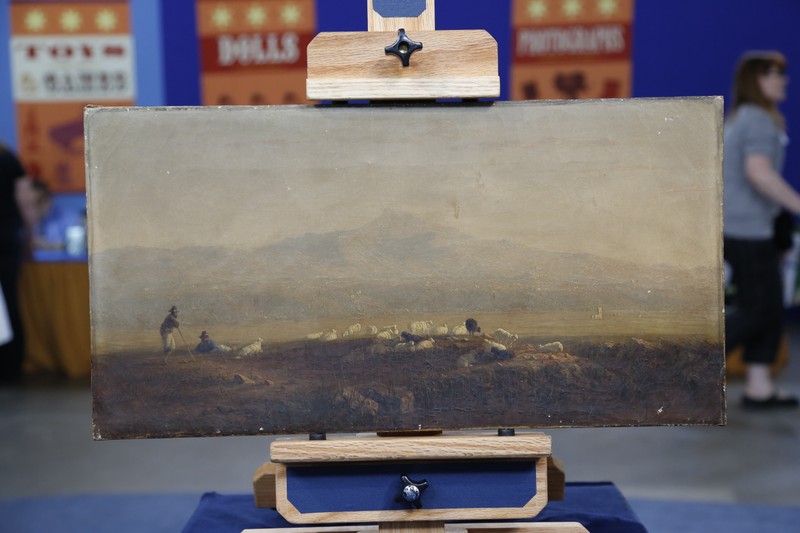 Betty Krulik and the owner of the Gifford painting are thrilled by the discovery at the Boise, Idaho, event in 2014. Krulik was able to recognize this hidden gem as a Gifford based on its style, here depicting an Italian landscape. She appraised it for $300,000.
Support provided by: Learn more

In this exclusive interview, appraiser Betty Krulik shares more about 19th-century landscape painter Sanford Robinson Gifford and ROADSHOW’s $300,000 treasure from Boise, Idaho. The interview has been edited and condensed.

"Even before I saw the signature, I knew it was a Gifford"

ANTIQUES ROADSHOW: You appraised our biggest find of Season 18 — a Sanford Robinson Gifford oil painting. When you saw the painting approaching your appraisal table, what was your first thought? How quickly did you know that it was special?

BETTY KRULIK: Even before I saw the signature, I knew it was a Gifford. I could tell from 10 feet away that it was so much better than the average picture we see on the line. We can tell because we see hundreds, perhaps thousands, of works per month, so it is possible, almost immediately, and from a distance of 10 to 20 feet, to tell whether a work is 17th, 18th, 19th or 20th century.

Much of what we see on ROADSHOW are modern works (that is, from the 1940s through the 1980s) and what could be characterized as decorative, meaning quickly painted in a formulaic style, the type of art you see in “starving artist sales” at hotels, works that were made in factory-type studios. When we see something like this painting, your antennae start to quiver!

You mentioned to the painting's owner that the work was "signed with every stroke of the brush." What did you mean by that?

BK: That is a saying I heard Ira Spanierman, a New York gallery owner, use. By that we mean that the signature is the last thing that identified the work as that of the artist. It is the composition, the color, the design, and the paint handling that are all “signatures” of the artist’s style. When you look closely at an artist's work, you can define his style, you see his characteristic mark, his handwriting. After nearly 40 years of studying this Hudson River period, we’ve come to know the hand of many of these artists and the materials they used. It almost becomes second nature, like recognizing an individual; you know the way they walk, hold themselves, texture of hair, gestures, even without seeing their face.

In the case of Gifford, and most important artists, he has his own signature style. I have been a fan of the artist since I first began working in the American Art field in 1976. As the owner approached I immediately recognized some of the classic characteristics of Gifford’s work: the format (width twice the height), the tonality, the balance, the expansive view. Then, when I was able to see it up close, Gifford has a distinctive way of handling the paint. Even before I saw the signature, I knew it was a Gifford.

The owner's story is wonderful. She describes the painting as a "lost" piece that was stored in the basement for years. With over 30 years in the business, how often do people come to you with similar stories?

BK: Surprisingly very rarely. Either the owners know what they have, and they don’t know the value, or they have an inflated idea of the value. But the old saying “familiarity breeds contempt” really hits the mark, as tastes change, treasures go into the attic, basement or barns, and subsequent generations knew it was something, but it is not “contemporary taste” so they leave it in storage. Most often the owners know it is a treasured family item, they just don’t know what it is.

In this case, the owners knew it was a treasure. My understanding is that they had it in their house and would periodically work at deciphering the signature. Tell us more about the painter, Sanford Robinson Gifford.

BK: Gifford was a New York artist, born in 1823. He hit his stride in the 1850s and worked until his death in 1880. He was of the “Hudson River School,” a loose group of artists that lived and worked along the Hudson. He was trained formally as a portrait painter after leaving Brown University, but under the influence of Thomas Cole he pursued landscape painting. He is known for panoramic landscape views “in which he established the radiant sunlight and filmy atmosphere that mark his most memorable paintings,” to borrow the words of Kevin J. Avery at the Metropolitan Museum of Art.

He was already a well-known painter, exhibiting annually at the National Academy of Design, when he served as a guardsman in the Civil War. His paintings of the Union Army encampments are amazing documents of the war.

Though known primarily for his sublime views of the northeastern United States, he did travel nationally, as far as Seattle in the 1870s. And he traveled internationally twice, from 1856 to 1858 in Europe (Germany, Switzerland, and Italy) and then again from 1867 to 1868, when he went to Italy, Greece, and the Middle East.

He died of what is presumed to be malaria in 1880 at the age of 56. He painted under a thousand works — the memorial catalogue of his paintings lists just 735.

There was a wonderful retrospective exhibition at the Metropolitan Museum of Art, which traveled to the National Gallery in 2004.

The painting was very dirty when it came in to ROADSHOW. You mentioned that most collectors would rather see it this way and use their own conservators. Why is that?

BK: I should clarify, in an auction situation it is usually best if the object is shown untouched, so that prospective buyers can tell that it is totally fresh to the market. In the case of this painting, the guests wanted to sell it privately in order to maximize the value. In selling a work at retail, it is important to present it beautifully. We therefore decided to have it cleaned — once it was cleaned, we could see the beautiful emanating light behind the mountain, so much a “signature” of the artist’s work, that was hidden under all those layers of dust and grime.