Nijinsky & the Psychologists: True or False?

Sometime in the early 20th century, when Russian dancer Waslaw Nijinsky began painting, a contemporary newspaper article claimed his artwork had caught the attention of Sigmund Freud and Carl Jung. These letters from the famed fathers of Western psychology suggest otherwise. Read the letters for yourself below.

At the June 2013 Detroit ROADSHOW a guest named Norma showed appraiser Ken Gloss a pair of letters from two eminent psychologists, both dated 1933, which her husband’s aunt had apparently saved for many years. One letter was from Freud himself, and the other from Carl Jung.

When Russian dancer Waslaw Nijinsky began painting, a newspaper article claimed it caught the attention of Sigmund Freud and Carl Jung. These letters from the famed fathers of Western psychology suggest otherwise.

As Norma explained to Gloss: “My husband's Aunt Bernice was an art student at Ohio University. She had read an article about Nijinsky having an art show of the paintings that he did when he was having a mental breakdown. She wrote to Carl Jung and Sigmund Freud and received a reply from both of them. After Bernice passed away, I picked up one of her books to take home, The Writings of Sigmund Freud, and inside the book was an envelope with these letters, and the article." 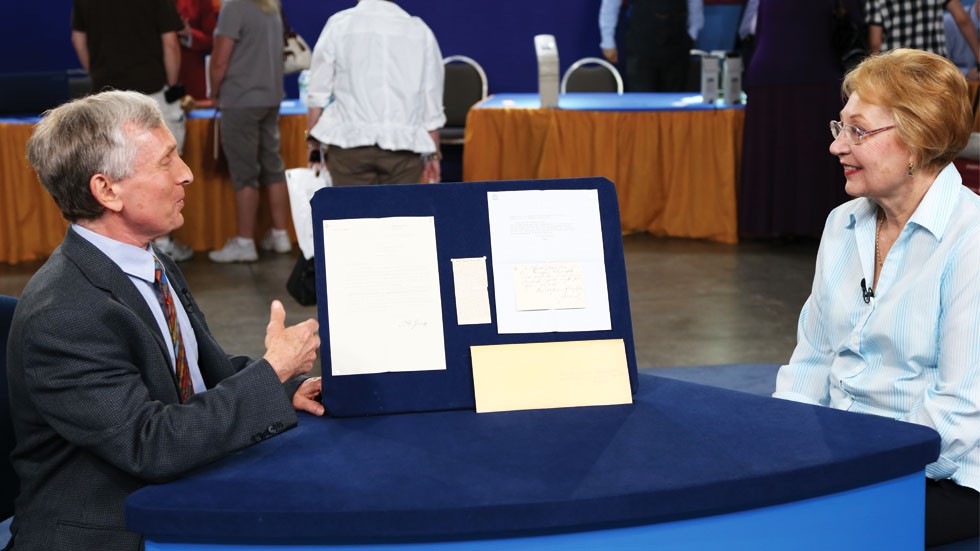 Books and manuscripts expert Ken Gloss explains the significance of the letters at the Detroit ROADSHOW event in 2013. He placed a retail value of $15,000 to $20,000 on the group.

Below, you can read the newspaper article about Nijinsky and the letters that “Aunt Bernice” received from Drs. Freud and Jung in reply to her inquiry.

Various stages of madness extending over a period of 13 years are illustrated in the paintings of Waslaw Nijinsky, famous Russian dancer, who was the star of the Diaghileff Ballet Russe, and who is now in a Swiss sanitarium, living as in a dream.

When his breakdown began Nijinsky turned to painting, and his watercolors, pastels and drawings are of such psychological interest that Dr. Freud and Dr. Jung advised Mme. Nijinsky to exhibit them. A collection of more than 50, illustrating the progressive stages of Nijinsky’s illness, are to be exhibited on Feb. 2 at the Leggett Studios in the Waldorf-Astoria for three weeks.

“As if detesting now the brilliant coloring which made the Ballet Russe resemble an agitated rainbow, Nijinsky,” says the New York Times, “has turned in the recent years of his illness to the macabre. He paints unmitigated gloom, for the most part large areas of somber color with perhaps a few lines to suggest the outlines of a soldier’s helmet — the object which he portrays over and over again.”

In the first stage of his madness the dancer painted floral designs and insects. Later he turned to subjects which sometimes resembled haunted faces, with staring eyes, and sometimes grotesque mass. Then came the “black period” when he painted almost unrelieved dark spaces. Painting and drawing materials are kept before him always, but he only turns to them intermittently.

Translation of a communication received by Berniece S. Edwards from Dr. Sigmund Freud in 1933

Your letter gives me cause (Motivation) for a warning which you certainly sometime will find valuable: Namely, never believe something just because it is (stands) in a newspaper. In reality I have never seen the dancer Nijensky [sic] and I have never had anything to do with his case.

If my memory is correct it was during the war [World War I] that I was consulted by Mme. Nijinsky. Mr. Nijinsky suffered then from a catatonic form of schizophrenia and was mentally so stuporous that conversation with him was impossible. No work of art of his was shown to me, nor was it in any way mentioned that he had produced anything during his illness.

I suppose that van Ghogh [sic] is a more interesting case. I also recommend to you the German book, which you probably already know, about the art of insane people by the late Dr. Prinzhorn. I should also advise you to inquire with one of my pupils in New York, Dr. Eleanor Bertine, (108 East 38th, Street,) about the art in mentally abnormal conditions. She might be able to give you some first hand information.