Navigating the Truth Behind Amelia Earhart and Fred Noonan

An examination of Amelia Earhart's life and the factors that led to her becoming one of the world's most famous aviators. 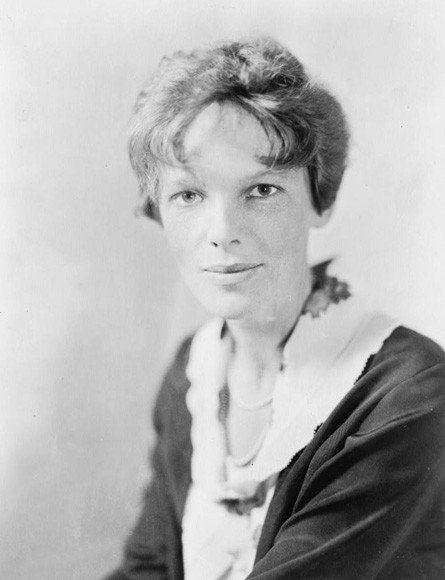 Amelia Earhart was a skilled pilot who found her calling at an early age. She was also a perfect specimen for celebrity. (Image via Wikimedia Commons.)

Amelia Earhart was one of those lucky souls who found her calling while young and then developed the skills to satisfy her desire for greatness. She was also lucky to be a perfect physical specimen for celebrity: striking in just the right way for her time, with wide-set eyes, high cheekbones and full lips, set in a boyish face. A photo taken in 1904, when Earhart was 7 years old, shows a girl in a high-collared blouse under a pinafore dress, with a bow in her center-parted hair — the very spit of Judy Garland in Wizard of Oz, which would be released in 1939, the year Earhart was declared dead. Her navigator, Fred Noonan, is often apportioned some of the blame for Earhart's fatal crash in the Pacific Ocean, which ended her record-setting attempt to fly around the world. Rumors have it that he was alcoholic. This is probably unjust; such rumors did not emerge until he was long dead. The letters and telegrams brought to the July 2013 Knoxville ROADSHOW (estimated value: $12,000-$18,000) testify to Earhart's importance as an aviator, but also show her as a macher who sought success for its own sake.

During her childhood and adolescence in the Midwest, Earhart was a tomboy who shot rats with a rifle, played football and collected bugs. After high school, she briefly attended a finishing school then dropped out to work as a nurse's assistant, tending to wounded soldiers returning from World War I. The global tragedy of the war gave way to the global tragedy of the 1918 flu pandemic, and Earhart continued to work as a nurse, in the process contracting flu herself. It took her a year to recover — though she never did fully. Then, for a while, she dithered. She enrolled in and then dropped out of college.

To the Point: Earhart's Prenuptial Letter to Putnam

In December of 1920, Earhart attended an air show in Long Beach that gave focus to her life. As children, she and a friend had been buzzed by a daring biplane pilot, which was thrilling; but when one of the pilots at Long Beach took her up for a ride, she immediately knew what she must do with her life. Aviation, like virtually all professional fields, was dominated by men, but ever since she was a girl Earhart had kept scrapbooks of women who had succeeded in "masculine" jobs. She saw no reason she should not do the same as a pilot.

A year after buying her first airplane, Earhart set a record when she became the first woman to fly at 14,000 feet. A few years later, an impresario named George P. Putnam found himself in need of a woman aviator to cross the Atlantic. He was told that Earhart had "the right image," and contacted her by phone. Earhart eagerly signed on to Putnam's project, but the flight amounted to a publicity stunt. Earhart sat in the back of the plane while two men did all the flying. When Earhart returned to the United States, she was received by President Coolidge and showered with ticker tape during a parade in New York City. Earhart was embarrassed by the attention she received for being a mere passenger. "I was just baggage," she said.

Still, Earhart worked with Putnam, leveraging her image to promote all kinds of merchandise unrelated to airplanes or the plight of women: luggage, clothing, books and cigarettes. (Putnam and Earhart eventually entered into an explicitly open marriage.) Her fame grew, but Earhart felt that she hadn't earned the accolades being showered upon her: "Lady Lindy," "The Queen of the Air," and so on. Still, her image and articulacy were powerful tools. At this point in her career, says Catherine Williamson, director of Fine Books and Manuscripts at Bonhams, Los Angeles, Earhart had few accomplishments but a media-friendly way about her. This undoubtedly had a lot to do with Earhart's first flush of fame, which Earhart then used to set up her future triumphs.

"She was plugging in to all these different things at the same time: she was a woman, she was an aviator, she was an adventuress, she was good-looking," says Williamson. "She was famous at the same time as Katherine Hepburn, and had a very similar look: independent, capable, confident, slightly androgynous. There's a headshot of Earhart I was looking at recently, and I actually thought it was Hepburn, from Christopher Strong, where she actually plays a doomed aviatrix. But no — it was Earhart. But it looked like a Hurrell glamour-shot from MGM."

Earhart was a skilled pilot; there is no doubt about that, and her contemporaries commented on it. Once famous, she set about securing a legitimate legacy as an aviator, and was soon setting record after record.

When the time came for Earhart to attempt what she probably intended as her final record, a flight around the world, she teamed up with a superbly skilled aviator, pilot and navigator named Fred Noonan. Earhart's renown would have ensured that she had her pick of navigators for the dangerous flight she was contemplating, and contemporary sources indicate she could not have hired a more competent partner than Noonan.

In the Knoxville segment, the guest who brought in his aunt's collection of letters and telegrams refers obliquely to the "problems" that Noonan was widely known to have. The guest is probably referring to modern-day rumors that Noonan had a serious drinking problem, and that his alcoholism surely played a role in his and Earhart's demise. The story is widespread, and often assumed to be fact. Yet the first reference to Noonan's supposed alcoholism does not appear in print until 1966, and seems to be based on a police report, citing drunk-driving in 1937, that no longer exists, if it ever did. In any case, one DUI would not make Noonan a perpetually sozzled klutz. Thomas King, writing in Amelia Earhart: Is the Mystery Solved?, concludes that there is simply no evidence that Noonan was an alcoholic. "One can speculate that he drank himself silly once the plane was in the air," he writes. "One could also speculate that he had a nervous breakdown, went blind, or was possessed by the devil."

No, what probably ended Earhart's final flight was the fact that she was trying to find an uninhabited speck of land in the middle of the Pacific Ocean called Howland Island, had very little fuel to spare, and had set out with a map that showed Howland to be five miles from its actual position. In her last transmission, at 8:40 am on July 2, 1937, she radioed that she could not see the island, but believed she had arrived at the correct position on the map. Indeed she may have. After two weeks of searching, the Navy and Coast Guard had turned up no evidence of Earhart, Noonan, or their airplane. Two years later, Earhart and Noonan were declared dead.

What is Earhart's legacy? As with all setters of records — which are by nature temporary — her legacy is ambiguous. Aviation was in its infancy, so it is merely a fact that someone else, another woman, would eventually have set the records she set. To measure Earhart by her achievements as an aviator, is, strangely, to belittle her. She was many things besides. “She was the face of an industry,” says Williamson. “That’s a talent.” 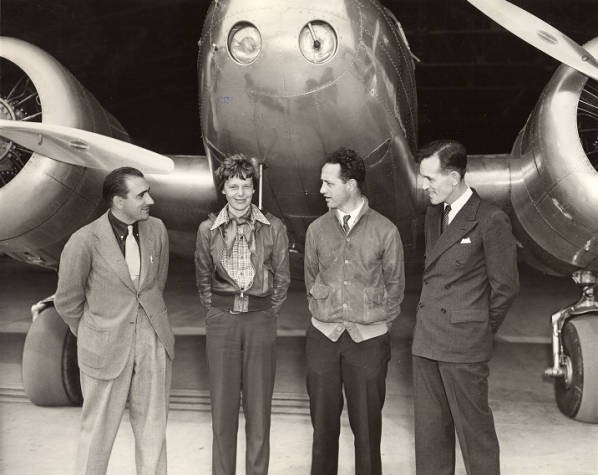 From left to right: pilots Paul Mantz, Earhart, Harry Manning and Fred Noonan, in Oakland, California in 1937, the year of her final flight. (Image via Wikimedia Commons.)