At the Charleston, West Virginia ANTIQUES ROADSHOW appraisal event in 2014, expert Francis Wahlgren examined a 1957 letter from J.R.R. Tolkien to Marquette University's director of libraries William B. Ready from 1957 regarding the acquisition of archive material. The letter, written in Tolkien's distinct hand, is now worth $8,000 to $15,000.
Support provided by: Learn more

While a professor at Oxford University in the mid-1950s, author and scholar J.R.R. Tolkien worked with William B. Ready, director of libraries at Marquette University, to negotiate the sale of archive material related to some of his now-classic novels. Read a transcript of the letter below, and get a close-up look at Tolkien's distinctive handwriting. 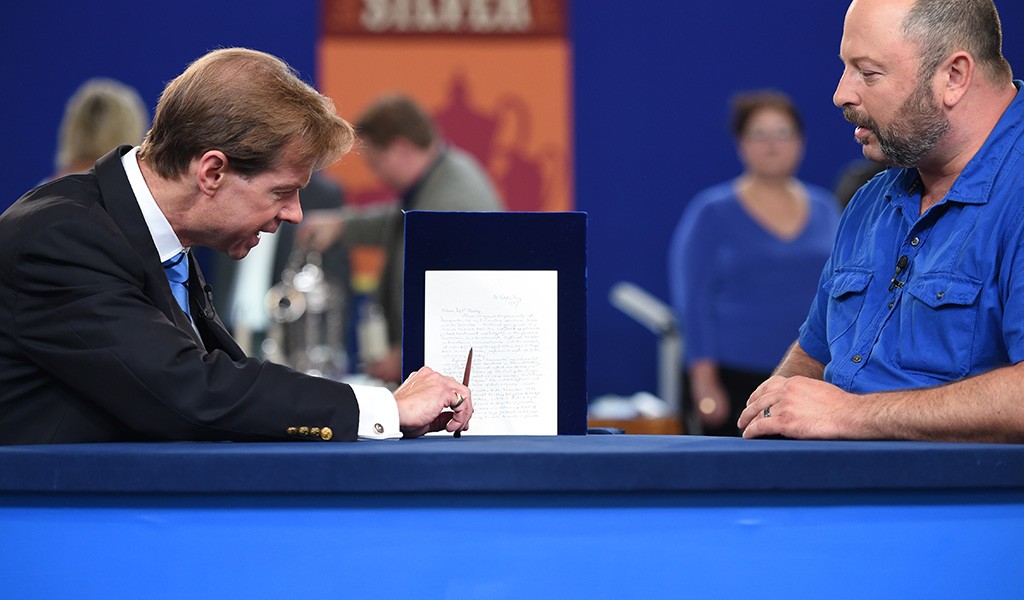 J.R.R. Tolkien's Middle Earth, a world filled with hobbits, elves, men and more, has manifested itself in popular culture today through best-selling books, award-winning films, and dedicated fans. But before Tolkien had found success with his iconic novels The Hobbit (1937) and The Lord of the Rings (1954-1955), he was a professor of Old and Middle English at Oxford University who expressed his love for the English language through storytelling. Tolkien's The Hobbit found its roots as a tale he would tell to his younger children; he then typed it up and got a publishing deal with George Allen and Unwin in 1936. From there, Tolkien continued to craft medieval-inspired fiction, including Farmer Giles of Ham (1949) and The Lord of the Rings, which took over a decade to produce. His books were popular, but they certainly hadn't yet developed into the classics they are seen as today.

Flash-forward to 1956 in the Midwest of the United States. A year after The Lord of the Rings was published, William B. Ready was hired as the director of libraries at Marquette University in Milwaukee. He was tasked with building out the archive for the newly constructed Memorial Library, and thus brainstormed ideas for ways to place the library on the cutting edge of collecting. Ready's prescient taste drew him to Tolkien's fiction, so he looked into ways of connecting with the author to see if they could acquire some of his material. That year, Ready approached Tolkien through Bertram Rota, a well-known rare book dealer in London. Tolkien was still teaching at Oxford, though he was nearing retirement and lived alone with his wife, their children having grown up and moved away. Ready and Tolkien had a brief period of negotiation surrounding the acquisition of material related to The Hobbit, Farmer Giles of Ham, and The Lord of the Rings. The agreement landed on £1,500 (or less than $5,000) for original manuscripts and other documents for these titles. Tolkien was also invited to speak at Marquette twice: once in 1957 and again in 1959, but both times he canceled due to family concerns.

In spite of the success of The Lord of the Rings (which has surprised me very much), our "Chancellor of the Exchequer" has walked off with most of the cash evidence of that, anyway — or will.

At the Charleston, West Virginia, ANTIQUES ROADSHOW event in 2014, books and manuscripts expert Francis Wahlgren appraised a letter from Tolkien to Ready that was written on Oxford letterhead during the period of negotiation. It references Marquette's invitation to visit campus and speak, mentions Bertram Rota, and includes Tolkien's surprise at the nascent success of The Lord of the Rings. It contains Tolkien's distinctive, calligraphic and almost gothic-looking handwriting. The owner of the letter had inherited it some years ago and had it appraised in 1995 for $700. Wahlgren described Tolkien's recent growth in popularity and determined that an appropriate auction value for the letter would be from $8,000 to $12,000, with an insurance estimate of $15,000. "Today, The Hobbit manuscript would be [worth] more than a million dollars, Lord of the Rings easily more than a million dollars," Wahlgren said. But Marquette still possesses the original manuscripts for these classics today in its special collections and offers public showings. The Tolkien Estate retains copyright of the manuscripts.

Read a transcript of the letter, then take a look at Tolkien's distinctive handwriting below.

I have ill repaid the generosity of Marquette, by my discourtesy of silence, to you and the Director. Without going into long details this has been due not to lack of pleasure, (indeed excitement and delight) in the generous invitation, but to overwork, difficult domestic and academic circumstances, and the necessity of coping (or trying to cope) with a now v.[very] large mail, as well as heavy professional work and duties, without any secretary!

Professors of “humanitis" [sic] are not provided with any secretarial assistance in this institution; and I certainly cannot afford one of my own! In spite of the success of The Lord of the Rings (which has surprised me very much), our "Chancellor of the Exchequer" has walked off with most of the cash evidence of that, anyway — or will.

I have just written to the Director. To the effect that I should be very delighted to accept Marquette’s invitation; and that I shall try to arrange my affairs so as to make it possible. It depends on my success in obtaining leave of absence. I cannot hope for that until next year; but I may be able to make it possible to come sometime after about March 20, 1958. I have, however, one unsolved difficulty beyond the academic, and that is the domestic situation: it will prove difficult either to leave my wife alone, or to persuade her to accompany me. (My children all having grown up and departed, we live alone.)

I saw Mr. Be[r]tram Rota on Saturday Friday last (June 7), and handed over Hobbit material, and Farmer Giles (including two early MS's I had discovered). The other material he has inspected; but it needs, both for my own sake and yours, some inspection and ordering on my part. That requires some attention, which I hope to be able to give to it, when this term ends (at the end of this month).

I hope indeed to have the opportunity of meeting you ere very long, face to face. In the meanwhile I look forward to receiving your book of stories. (I too have found more favour outside the Church than within it. Apart from a notice in the Tablet, not very good, I have been greeted with silence in this country. One of my most charming notices, however, was in the Tablet of New Zealand). My good wishes to Patrick!