First-person accounts from a life on the wagon train

"Two years ago I found you a happy & contented girl & that I now willing & unnecessarily leave you for the mere uncertainty of gain thereby making you unhappy for a long time & perhaps for life."

In 1850, John Walker upended his life in Central Missouri to travel to California as one of thousands of gold prospectors. Having recently proposed to his girlfriend Eliza, he risked stability in his relationship to embark on an adventure for uncertain fortune when the California Gold Rush was in full swing. When Walker set out on the trail, he traveled about 25 miles a day while managing covered wagons, teams of livestock, and provisions. Between the years 1848, when James W. Marshall discovered gold in the American River, and 1850, the population of San Francisco grew from 1,000 to 20,000. Walker was part of a mass migration. 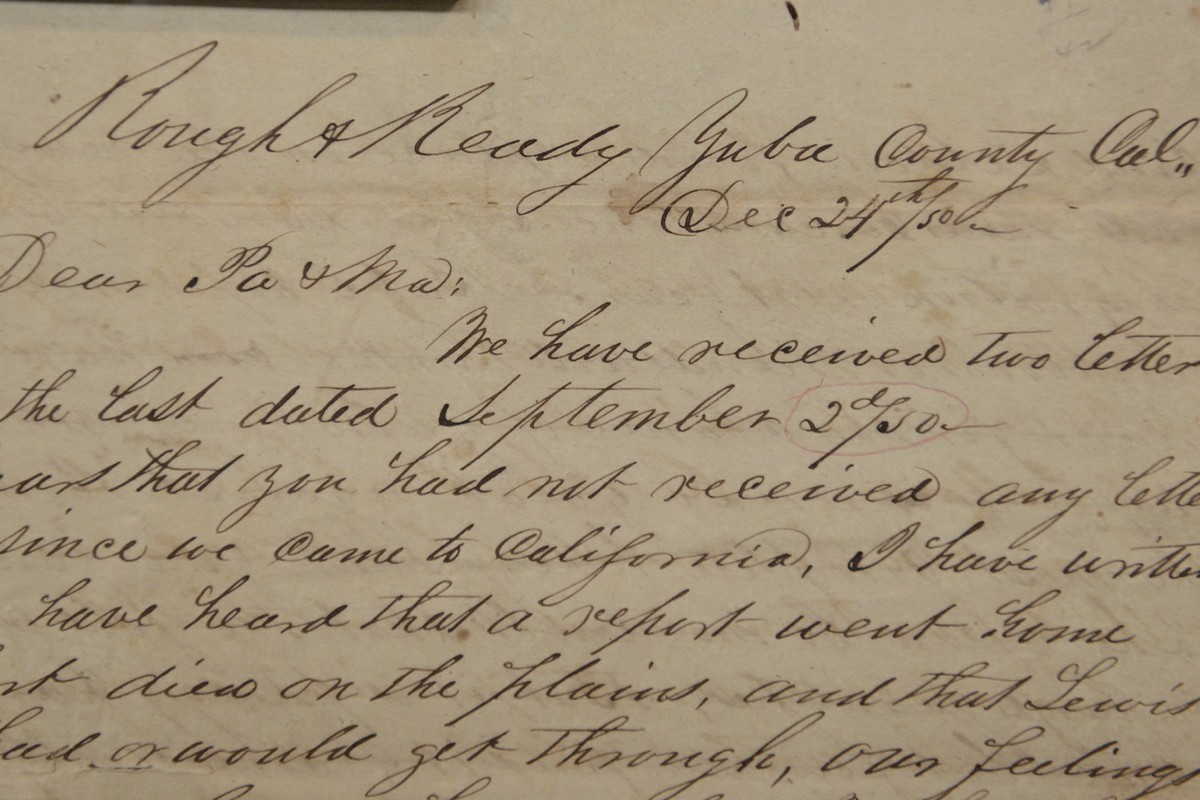 John Walker writes to his parents from Rough and Ready, California, during the Gold Rush in December 1850. The mass emigration to the West in search of gold had begun in 1848.

During ANTIQUES ROADSHOW's 2016 visit to Fort Worth Texas, Ken Gloss appraised a collection of letters belonging to Walker's ancestor, which depict the relationship between Walker, his parents, and his sweetheart, who would eventually become his wife. These letters were no ordinary depictions of life on the trail. "A lot of times, when you read a letter about the Gold Rush, a diary, a war — 'It's cold,' 'It's hot,' but you don't really get a feel for it," Gloss said. The details that Walker provided about life as a gold prospector don't simply outline the weather; his voice inspires empathy in the reader.

I hope none of our neighbours or friends will think of hazarding so much for the chance of gain here.

Walker spent a handful of years searching for gold, but returned home presumably without the fortune he had sought. Gloss placed a retail value of $3,000 to $5,000 on the collection, saying that Walker "did get something valuable out of the Gold Rush — the letters."

Read an excerpt from this collection of letters below and browse the image gallery for more transcriptions of the letters.

Excerpt of Letter from John Walker to His Parents

Rough & Ready Yuba County Ca. Dec. 24th/50 Dear Pa & Ma: We have received two letters from you the last dated September 2nd/50. It appears that you had not received any letters from us since we came to California. I have written four. We have heard that a report went home that Robert died on the plains, and that Lewis and I had or would get through. Our feelings were strange when we heard this. We hope that some of my letters have reached you ere this, and removed the sad feeling that such a report would produce. Brother Lewis left us early in Sept. We have not heard a word from him. We feel uneasy, from the fact that there was many deaths from Cholera, on the Coast about that time. I must refer you to him for the details of our trip accross [sic] the plains. Letters from California are so numerous and contain a great variety of opinions about affairs here, that I hesitate to give my own, and in fact I cannot write one that is entirely satisfactory to myself. Those who have been successful write very extravagant letters, which are published and read by every person. Those who have had only a moderate share of luck, temper their accordingly, and a few of these, find their way into the papers. While those who have been unfortunate, give a bad account, curse and condemn the whole country. Wish themselves at home or anywhere else than California. Letters of this kind seldom find a place in the newspapers. Under these circumstances I fear there will be a large emigration next year. But I hope none of our neighbours or friends will think of hazarding so much for the chance of gain here. While the chances are so great against them. It is the most complete lottery that you can imagine. There can be no doubt that the gold is here and in large quantities. But it is crazy hard to find, and but few do find it, consequently the great majority are not only disappointed, but seriously damaged in money matters, and not a few in moral habits. Some of the letters that are published are correct, but they are, as I have said, the letters of those who have been lucky. There is about seventy thousand persons engaged in mining, and if all of those that have not been lucky were to write, I think it would form quite a different impression to that which exists in the States. I cannot advise any person to come. But if any of our neighbours are determined to come, say them, to fix no time when they will return, and so arrange their business, that they may stay several years, for it will take more time to make a fortune than many have supposed. Married men should bring their families, and young men who are "Under Contract" should close them, for it is too far and too long to be separated from such tender relations. The Society here is far from being good, but by another year it will be better. There are many highly respectable families here. The miners sustain the same relation here, that the farmers do to all the departments of business, in the States. If one does well, the other shares it. There is now a pressure in the Mines, there has not been rain enough to afford water to wash out the dirt that has been thrown up for several months. The rain generally commences in this country about the first of November. We have had but little rain so far, and if it should continue so through the winter, many of the miners and traders will sustain considerable loss. The process of daming [sic] and draining the rivers proves an entire failure in a majority of instances. Mining is all luck (except a good deal of hard work) the most ignorant and trifling man in the country is as likely to hit upon the rich spot as anyone.

John Walker writes to his then-girlfriend Eliza from Fort Laramie, Wyoming, about the circumstances of their engagement. Walker describes the country he has passed while on the wagon train from Missouri to Wyoming. A more detailed account of the various teams Walker has passed by while on the trail. Eliza sends an update about life back at home after hearing of John's arrival in California. Eliza provides an update about significant family events including several weddings. Eliza continues to update John on the affairs of the neighborhood.
About the Author Dylan Hayley Leavitt
Dylan Hayley Leavitt was ANTIQUES ROADSHOW's digital associate producer from 2012 to 2017.
More from PBS