What Ever Happened to the "Well-Baby"? 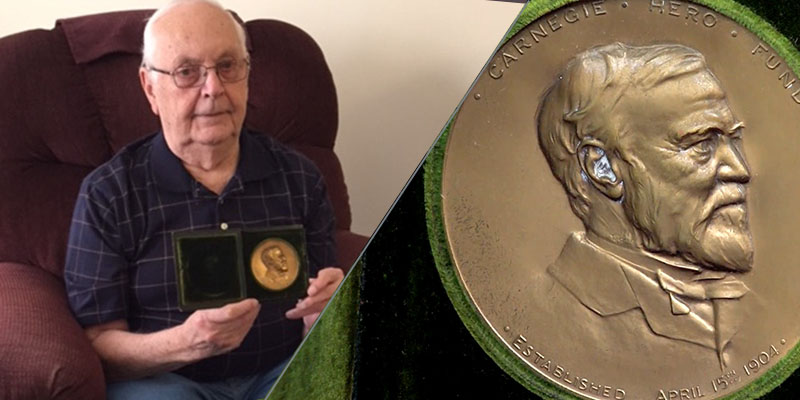 Find out how the rescued baby Don — now all grown-up! — was reunited with the descendants of his rescuer, the recipient of the 1931 Carnegie Hero Medal featured on ROADSHOW!

In May 2015, following the broadcast of our Chicago episodes, the inheritor of this 1931 Carnegie Hero Medal, Patrick Maloy, says he felt inspired by his ROADSHOW experience to seek out Donald Venema and get in touch.

Donald, now 91, is the Nebraska retiree whose misadventure as an 18-month-old served as the dramatic backdrop for Patrick's appearance on ROADSHOW. One August day in 1927, in Wallingford, Iowa, little Don happened to slip into the hole of a damaged well. Relatively unhurt by the fall, he was nonetheless trapped on a ledge some 30 feet below ground. The opening of the well was unstable near the surface, and despite there being a helpless toddler in distress, several men refused to climb down for fear of prompting an even more dangerous collapse. Stranded for more than an hour, and doubtless terrified, Don was ultimately saved by a man named Edward Maloy, who happened onto the scene and intrepidly volunteered to descend the hole by rope and find the baby.

Donald’s son Dave tells us that after surviving such a harrowing accident at his life's very beginning, his father went on to serve in World War II, and then spent his career working for the federal government.

Unsurprisingly, Donald says he has no memory himself of the ordeal so many decades ago — but as mementos his family have preserved the little red outfit and one of the shoes he was wearing on the day of his dramatic accident and rescue. Still going strong today at age 91, Donald is the proud patriarch of five children, 10 grandchildren, and 11 great-grandchildren.

As for our guest, Patrick, his family continues to honor the memory of their brave ancestor, Edward Maloy. On the 90th anniversary of his act of heroism, the family gathered to affix the Carnegie medal to his grave.

Edward J. Maloy, aged thirty, salesman, rescued Donald K. Venema, aged eighteen months, from a cave-in in a well, Wallingford, Iowa, August 4, 1927. Donald slipped through a hole in the ground at the top of a well and dropped to a narrow ledge thirty feet below the surface. From the top the well was filled with earth for a depth of six feet except for the hole which was twenty inches by twelve inches. Above the ledge the diameter of the well was six feet; below it three feet. Water almost filled the narrow part, which was about fifty feet deep. Men feared that the earth at the top would drop, not knowing what was supporting the fill, and refused to enter the well. Maloy arrived upwards of an hour after the accident. He removed most of his clothing, tied a rope around himself, descended feet first squeezing through the hole, and was then lowered on the rope by men to Donald. Particles of earth dropped from time to time. Maloy tied another rope around Donald, who was drawn out of the well, loose earth continuing to drop upon Maloy. Maloy was then drawn out.

Bronze Medal and $1,000 for a worthy purpose as needed.

See pictures of Patrick's Visit with Donald below:

Patrick Maloy (left), who brought the 1931 Carnegie Hero medal to ROADSHOW in Chicago in 2014, visiting with Donald Venema (right), who as an 18-month-old toddler was saved from a well by Patrick's grandfather, Edward Maloy, in August 1927. (Photo courtesy of Patrick Maloy.) Donald Maloy, with his rescuer Edward Maloy's Carnegie Hero Medal, during a recent visit from Edward's grandson, Patrick Maloy, who brought the medal to the Chicago ROADSHOW in summer 2014. (Photo courtesy of Patrick Maloy.) Together with a portrait of philanthropist Andrew Carnegie, the front of the medal reads, "Carnegie Hero Fund. Established April 15th, 1904." The reverse of the medal reads, "Greater love hath no man than this, that a man lay down his life for his friends." around the outer edge. In the center it says, "Edward J. Maloy who rescued Donald J. Venema from a cave-in in a well, Wallingford, Iowa, August 4, 1927." Framed box owned by Donald Venema, preserving mementos of his accident and subsequent dramatic rescue by Edward Maloy. In addition to newsclippings over the years, the family collection also includes the toddler outfit and one little shoe Donald was wearing that August day in 1927. (Photo courtesy of Dave Venema.) Maloy family headstone, with Edward's Carnegie Hero Medal affixed. (Photo courtesy of Patrick Maloy.)
About the Author Luke Crafton
Luke Crafton is ANTIQUES ROADSHOW's director of digital content.
More from PBS