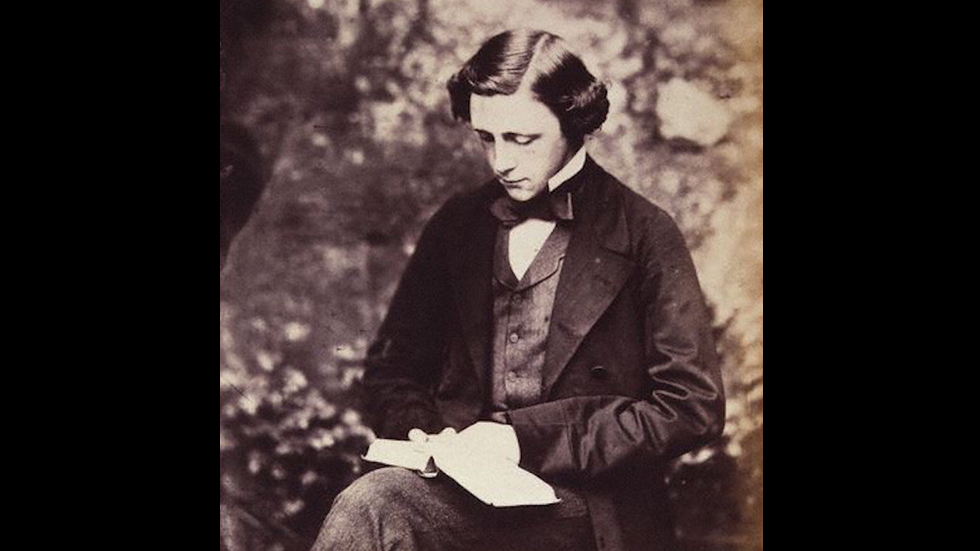 Lewis Carroll’s illustrious career as a children’s author began with a fanciful story made up during a river outing. And Alice’s Adventures in Wonderland has not been out of print since it was first published over 150 years ago. It is often credited with changing the entire character of children's literature. Although Alice remains a literary classic, controversy and concern about Carroll and his affection for young girls surfaced in the decades after his death.

During ANTIQUES ROADSHOW's stop in Indianapolis in July 2016, guest Julia [brought in a book she knew to be a signed first edition of Lewis Carroll's Through the Looking-Glass, and What Alice Found There. But she didn’t know its value. The book was accompanied by a letter from Carroll and had come from her father’s collection. Appraiser Ken Gloss gave a retail price for the book of $8,000 to $10,000. The letter, written to 11-year-old Mona Margaret Paton, would retail for $2,500. Gloss added that Carroll “had a lot of young girls that he wrote letters [to]... It wasn't just Alice.” 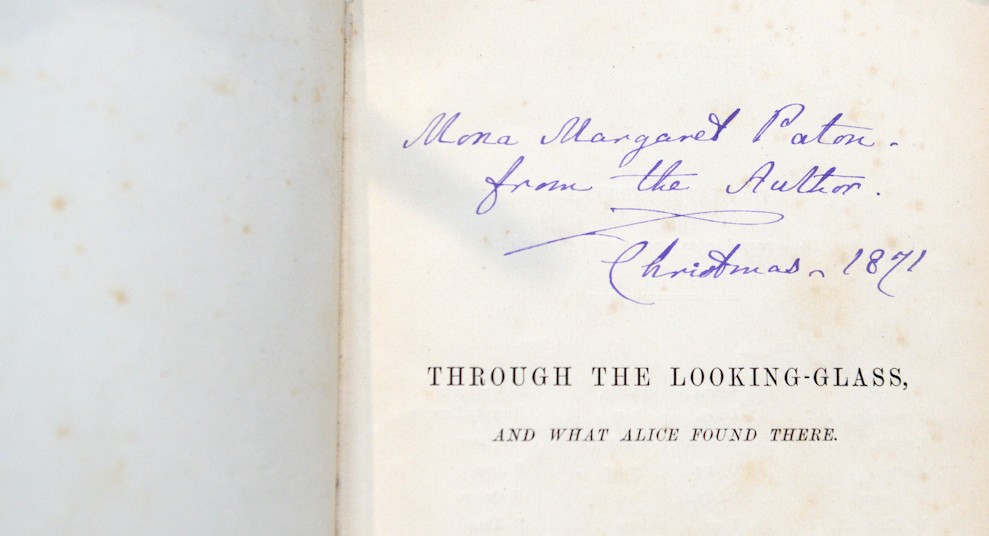 Carroll inscribed this first-edition volume of "Through the Looking-Glass" to "Mona Margaret Paton, from the Author. Christmas 1871."

Lewis Carroll was the pen name of Charles Lutwidge Dodgson, born in Daresbury, Cheshire, England, on January 27, 1832. The eldest son in a family of 11 children, Carroll would often entertain his siblings with stories and drawings — early talents that later helped bring him much literary success.

Both before and during his life as an internationally beloved author, Carroll was also a mathematician, instructing students at the College of Christ Church, Oxford. His male contemporaries at the university often recalled him as awkward and unfriendly, with a noticeable stammer. Biographers state he had easier relations with women and a warm, friendly way with children; and that Carroll, a life-long bachelor, was a very private individual and very close to his family.

Carroll took on the role of a sort of favorite uncle with several of the children of his colleagues and acquaintances. One family Carroll spent time with was that of his boss, Henry George Liddell, the dean of Christ Church. Liddell had a son and three young daughters, one of whom, Alice, was the inspiration for the title character in Alice’s Adventures in Wonderland.

Carroll made up the foundation of the story that became his best-selling debut to entertain 10-year-old Alice Liddell and her siblings on a boat trip in 1862. Alice urged Carroll to write down the imaginative story he had created, and after completing a manuscript in February 1863, Carroll met with Alexander MacMillan who agreed to publish it. In 1864 Carroll presented Alice Liddell with an expanded manuscript volume called "Alice’s Adventures Under Ground," complete with his own illustrations. MacMillan published the first and second editions of what came to be Alice’s Adventures in Wonderland (illustrated by John Tenniel) in 1865.

When he died in 1898, Carroll was a lauded celebrity. But posthumously, Carroll’s reputation suffered somewhat as some scholars interpreted his life and work to be tainted with possibly pedophiliac tendencies. These suspicions about Carroll’s true intentions toward young girls began in the 1930s when critics used popular-at-the-time Freudian analysis to deconstruct Alice’s Adventures in Wonderland and critique Carroll’s photography. Carroll had been a prolific amateur photographer, making approximately 3,000 photographs in his lifetime. Just over half of these images are of children, and about 30 depict nude or semi-nude children. 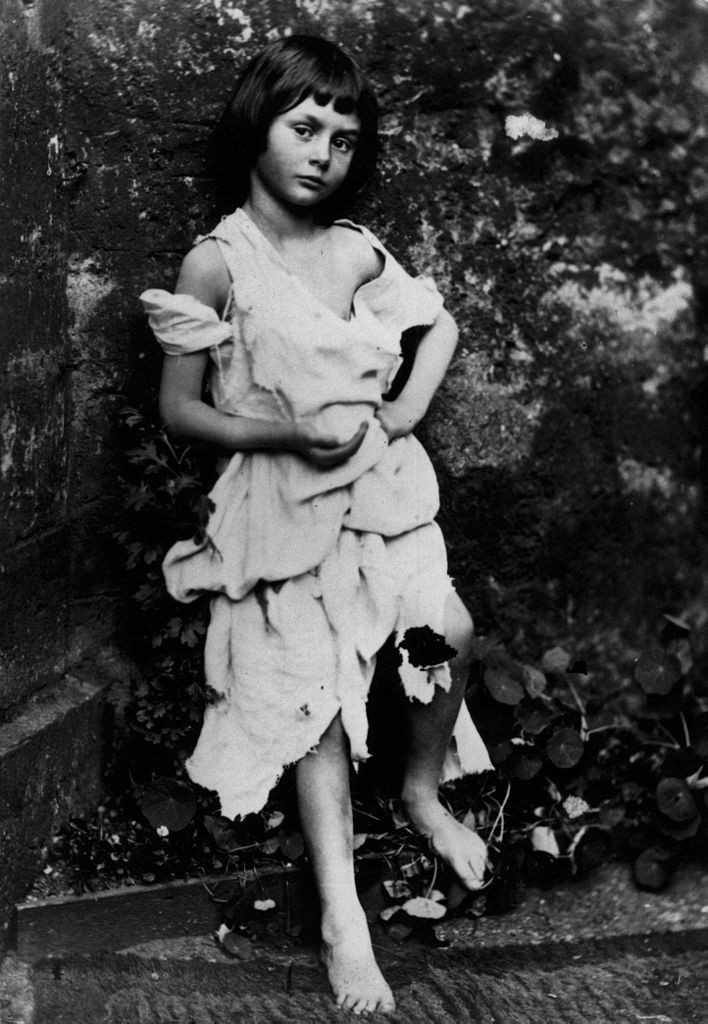 Lewis Carroll took this photograph of Alice Liddell when she was 6 years old. Carroll is said to have named his fictional Alice after Liddell. (Image source: Wikimedia Commons)

During the Victorian era children were considered the embodiment of innocence, and as defenders of Carroll have pointed out, pictures of posed nude and semi-nude children were not out of the ordinary. Carroll is known to have received parents’ permission to photograph at least some of the children, as he did for the picture of a 6-year-old Alice Liddell, whom he posed as a beggar-child in tattered clothing.

Biographer Jenny Woolf, in her book, The Mystery of Lewis Carroll, lays out evidence that Carroll was likely attracted to and romantically pursued teenagers and young women throughout his adult life. Woolf suggests that Carroll may have repeatedly used the role of an older, non-threatening, uncle-type figure to circumvent rigid Victorian social rules around romantic relationships that would have strictly forbidden a bachelor spending time alone with a teenage girl or a single woman. Had Carroll done that very thing when he developed his close relationship with the Liddell children? Woolf says there had been a rumor circulating around the time of the falling out between Carroll and the Liddell parents that Carroll was wooing the children's governess, or perhaps the teenage Ina Liddell. No definitive proof exists that the rumor was true. And since Carroll’s journals from that period have not been found (it’s thought his family members removed those pages after his death), we can only speculate about the veracity of the contemporary gossip.

You can watch the full appraisal from Indianapolis Hour 2 below: