Watch the Heated 1959 "Kitchen Debate" Between Nixon and Khrushchev 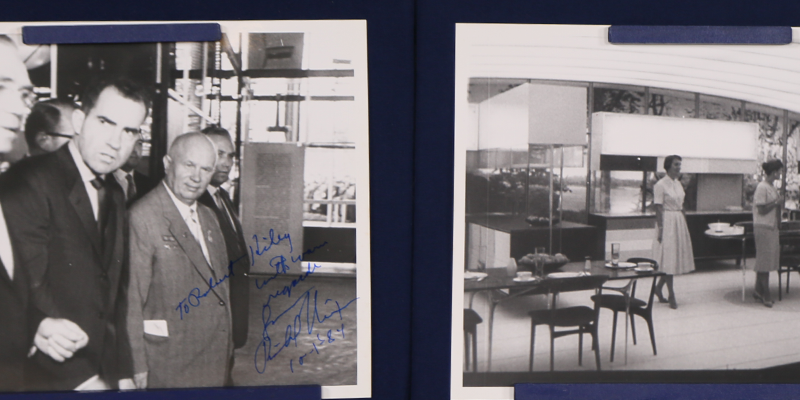 Watch the tense dynamic between Nixon and Khrushchev unfold in a mid-century model American kitchen in Moscow.

During ROADSHOW's event at San Diego's Hotel del Coronado in May 2018, a guest named Susan brought in her family's kitchen table. But this was not merely the kitchen table they "ate at and played cards at," as she put it to furniture appraiser John Sollo — it was a relic of a crucial Cold War event that captured the world's attention.

As a result of the 1958 U.S - Soviet Cultural Agreement, the Soviet Union and the United States agreed to set up exhibits in New York and Moscow to improve cultural understanding of one another. The American National Exhibition at Sokolniki Park opened in Moscow in July 1959, comprising a number of different exhibits. One was a model kitchen from a typical American suburban house, and in a contemporary photo of that kitchen, you can spot Susan's family table — the very one she brought to ROADSHOW 60 years later!

U.S. Vice President Richard Nixon escorted Soviet First Secretary Nikita Khrushchev on a tour of the exhibit that summer and a heated argument over capitalism and communism ensued. The entire feud was captured by media covering the exhibit and the "Kitchen Debate" became one of the most famous moments of the decades-long Cold War between the world's two great superpowers.

Sollo said not only does the table have "wonderful, historical significance, but it's also a wonderful piece of modern furniture." He estimated the "Kitchen Debate" table and Susan's signed Nixon photograph to be worth between $15,300 and $25,500 together in today's auction market.

Watch how this historic 1959 debate unfolded —