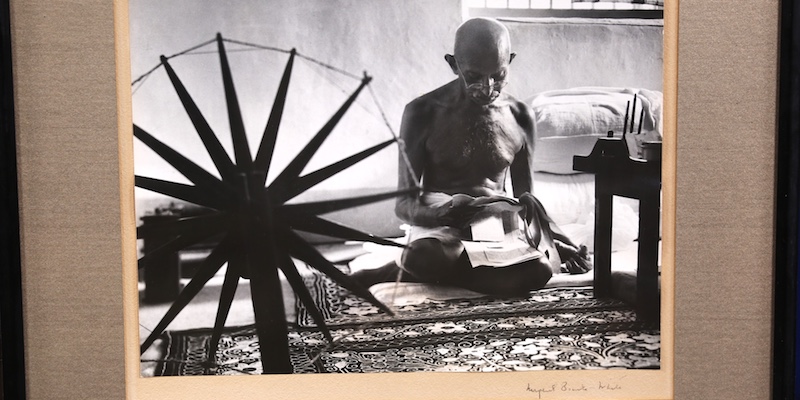 In a field of mostly men, Bourke-White had a successful and influential career as a photojournalist, from the late 1920s through 50s.

A guest named Pamela brought a remarkable black-and-white photograph of Mohandas Gandhi to the May 2018 ROADSHOW at Hotel del Coronado in San Diego and shared it with Photographs expert Burt Finger. The photo was taken by renowned photojournalist Margaret Bourke-White during a visit to India in the mid-1940s.

It is an image of serene simplicity: Gandhi sitting on the floor of his room, reading, with his famous spinning wheel in the foreground. Pamela told Burt that she inherited the print a few years ago from her stepfather, an Episcopal minister who was involved in the Civil Rights movement and had especially admired Gandhi as a social activist.

Pamela went on to say that she has developed her own strong attachment to the picture of Gandhi: "It's just like being in the room with him. .... For me, it really touches my heart."

Burt said he was thrilled to have the chance to see such a rare and historic print by such an important 20th-century photographer, estimating the retail value of the print at between $40,000 and $50,000.

We recently asked Burt to reflect on his experience at the San Diego ROADSHOW event; here's what he had to say:

It was quite serendipitous, at this time in our culture, for this extraordinary photograph of Gandhi by ground-breaking photographer Margaret Bourke-White, to reveal itself at the ROADSHOW in San Diego last May.

In a field of mostly men, Bourke-White forged a successful and influential career as a photojournalist, from the late 1920s through 50s.

One of only a handful of women photographers who documented the brutality of war in Europe, she witnessed the liberation of concentration camps, airstrikes from inside bomber planes, and the German invasion of Moscow during World War II. In fact, I had a friend who was an American soldier and met Margaret Bourke-White during his tour of duty in Italy.

When LIFE magazine got its start in 1936, the first cover photograph was by Bourke-White — from her document of the Fort Peck Dam, representing the power of machine technology. This was just one of the "firsts" in her ground-breaking career.

Later, her photo essay of Mohandas Gandhi included this powerful image of the leader at his spinning wheel. While this particular photograph was not included in the original LIFE feature, the magazine did publish it, in memoriam, after Gandhi was assassinated.

This is just the kind of photograph I love to see in person. It was so thrilling to discover such an iconic photograph, especially an older print, that makes you stand at attention in respect for both the photographer and the subject.