The Battle for Davy Crockett’s Marriage License Reaches an End 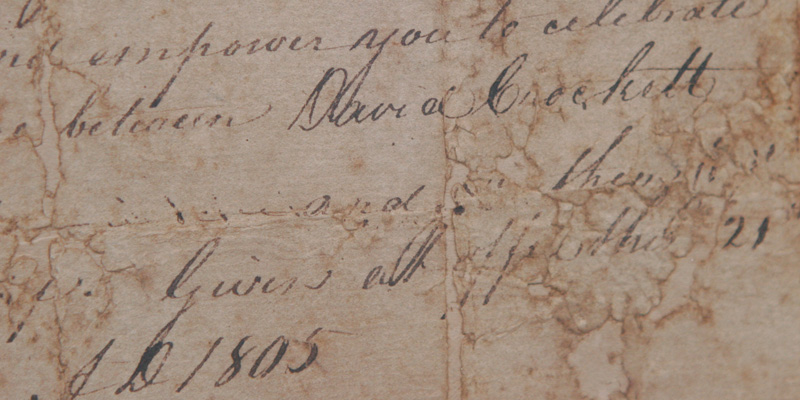 At 19 years old, David Crockett was a young frontiersman looking to start a family. Shortly after becoming engaged to a woman named Margaret Elder, his betrothed left him and eloped with another man. Crockett’s unexecuted marriage license remained in the Jefferson County Courthouse archives until the 1930s, when it was deemed worthless and subsequently taken home by a county official named Harry. But when the story surfaced on ANTIQUES ROADSHOW in 2006, a dispute erupted over of who rightfully owns the license.

In the early 1800s, the soon-to-be folk hero Davy Crockett met and fell in love with a woman named Margaret Elder at a wedding party in Tennessee. They became engaged, and on October 21, 1805, a marriage contract was drawn up for the intended couple by one Joseph Hamilton at the Jefferson County Courthouse. At some point along the way, however, Margaret Elder developed a different plan. She had met another man and eloped with him soon after, leaving Crockett and their unused marriage license behind.

Remarkably, 200 years later, during ANTIQUES ROADSHOW’s 2005 visit to Tampa, Florida, a guest named Margaret Smith brought in that very marriage license to be appraised. She told Books & Manuscripts appraiser Francis J. Wahlgren she acquired the document through her uncle Harry, who had saved it from disposal while he was serving as a Jefferson County court official in the 1930s:

“They were cleaning out the courthouse in Dandridge, Tennessee, and they were throwing away everything they thought was unimportant…they felt that it has no value whatsoever, and therefore it was going to be pitched out. And my uncle saw it, and being a fan of Crockett, he grabbed it right quick. And it’s been in the family ever since.”

Wahlgren, who called the document "irreplaceable," gave the unexecuted license an auction estimate of $20,000, with an insurance value of $50,000. Margaret went home that night having shared her family treasure with ROADSHOW, but she was soon to realize her own saga with Davy Crockett's marriage license was just beginning.

On January 26, 2006, just days after ROADSHOW’s first Tampa episode had aired on January 9, Tennessee officials who had seen the broadcast demanded that the then 87-year-old Margaret return the Crockett marriage license. Stating that her possession of a “protected public document” was in violation of Tennessee law, the county filed a lawsuit against her on February 27, 2006.

The case finally ended up in court on November 19, 2009, and five days later, a decision was issued that the Crockett marriage license did in fact qualify as a “Jefferson County historical document” and must be returned immediately. After an unsuccessful appeal, Margaret was forced to surrender the document on February 19, 2010.

Margaret’s son Vance, who had acted as her attorney, shared his viewpoint with the press following that outcome:

“The state had never asked for it back until apparently my mother went on the TV program 'Antiques Roadshow.’ They knew she had it because she had loaned them a copy of it. They found out it had some significant money value. ... She said it was hers and she wasn't giving it up."

Among the issues listed in Margaret's appeal was “whether the trial court erred in refusing to consider the recorded recollection of Mrs. Smith given on the television program 'Antiques Roadshow' … as evidence of the manner in which she acquired ownership of the Crockett license.”

Margaret argued that the court should have allowed her to read the transcript of her on-air appraisal from the January 2006 Tampa episode and submit it as evidence. Yet, the court ruled that since Margaret did not “review and authenticate the interview,” explicitly state that the interview truthfully represented her knowledge of how the license came to her family, or try to submit it as evidence to begin with, the court would not take her ANTIQUES ROADSHOW transcript into consideration, and her appeal was ultimately dismissed.

In a recent phone call with Steve Cotham, the Manager at the Knox County Public Library’s Calvin M. McClung Historical Collection, he stated that the marriage license currently resides in the County Courthouse in the clerk's office with the rest of the County's official records. When asked if the document will ever leave the clerk's office, or be loaned to a museum, Cotham stated, “it’s back where it belongs and [in the Courthouse] is where it will stay."

While Margaret and her son may have lost custody of the unique document their family looked after for more than 70 years, ROADSHOW will always remember the Davy Crockett marriage license as a Smith family treasure.

See Margaret and the original Crockett document below!