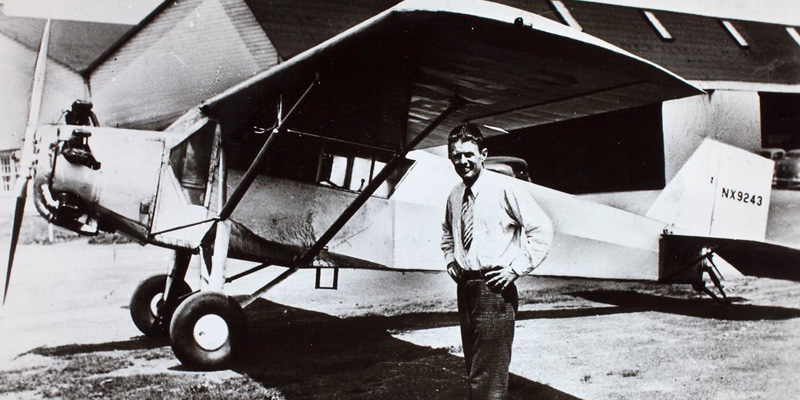 In 1938, Douglass Corrigan earned the nickname "Wrong Way" for mistakenly making a trip across the Atlantic from New York, when he was headed for California. But was Corrigan's "mistake" really an accident?

During ANTIQUES ROADSHOW’s 2007 visit to Spokane, Washington, a guest named Lassie brought in a collection of autographs from famous pilots, astronauts, and the like, all of which belonged to her late father. The collection, which now numbers 990 autographs, was appraised by Books & Manuscripts expert Ken Sanders who noted several of the more prominent names such as Amelia Earhart, Neil Armstrong, and the Wright Brothers. Lastly, Sanders pointed to the top of the group to show Lassie the “the infamous ‘Wrong Way’ Corrigan.”

For those who are unfamiliar with the rebel aviators of the past, Douglas “Wrong Way” Corrigan refers to the brash young pilot who “mistakenly” flew to Ireland instead of California, after he was told by aviation authorities that the trans-Atlantic journey would be a suicide mission. Yet, over the years many have wondered, was Corrigan’s “wrong way” mission an accident?

Who Was “Wrong Way” Corrigan?

Born in Galveston, Texas, in 1907, Douglas Corrigan was no stranger to the celebrity of the booming aviation industry when he made his trip to Ireland in 1938. After learning to fly as a young man, he was hired by the Ryan Aeronautical Company in 1927 to work on Charles Lindbergh’s Spirit of St. Louis, in San Diego, for what would become Lindbergh’s famous solo non-stop flight across the Atlantic.

Eleven years after the Spirit of St. Louis took flight, Corrigan decided it was his turn to make a name for himself. On July 10, 1938, Corrigan flew non-stop from California to New York, an impressive feat at the time, in his scrappy fixer-upper plane that he bought in 1935. While waiting to make the return journey to the West Coast, he requested permission to fly east, yet was promptly denied.

On July 17, Corrigan took off from Floyd Bennet Field in Brooklyn, New York, heading for California. Several minutes after take-off, Corrigan made a complete 180-degree turn and vanished into the clouds towards the Atlantic. About 24 hours later, Corrigan landed in Ireland, stepping off the plane and confidently asking, “Just got in from New York. Where am I?”

According to the pilot, he got lost due to bad weather and couldn’t correctly read his compass, therefore heading to Europe as opposed to California. Despite this excuse, Corrigan was immediately stripped of his license and sent back to the states via boat. Word of his stunt reached the United States ahead of him, however; Americans broadly embraced Corrigan's story, declaring him a hero. When Corrigan arrived back on American shores, he was greeted like a celebrity and his license suspension had been lifted.

In newsreel footage from 1938, Corrigan coyly tells his story of how he was flying to Los Angeles and “somehow got turned around.” True to form, Corrigan’s adventure captured America's entreprenurial spirit and he soon teamed up with companies to market “Wrong Way” goods and memorabilia — such as a watch that ran backwards. He also signed on to write an autobiography and star in a movie about his journey called The Flying Irishman.

Although Ken Sanders valued individual signatures, such as those of Amelia Earhart and Neil Armstrong, he didn’t make it to valuing Corrigan's individually on-air. In total, Sanders put a retail value of $12,000 - $15,000 on the overall collection.

While the American people regarded Corrigan as a daring pilot and trailblazer, there is still some speculation over whether his Ireland trip was a fluke or a stunt. As Lassie put it:

“I actually don’t believe that he really was going the wrong way. I think he knew exactly what he was doing. But he never admitted to that.”

A 1938 edition of the *New York Post* that highlights Corrigan's story by printing it backwards.
About the Author Melanie Albanesi
Melanie Albanesi is an associate digital producer for ANTIQUES ROADSHOW.
More from PBS