Who Was Colonel Elmer Ellsworth? 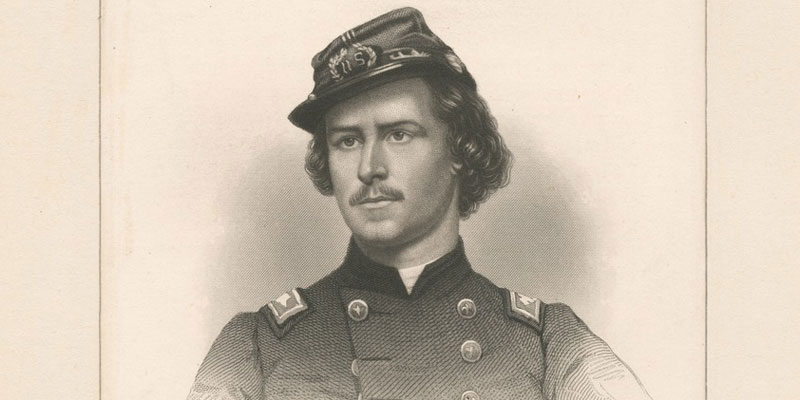 Col. Elmer Ellsworth was a dashing young infantry commander and a personal friend of Abraham Lincoln. On May 24, 1861, he became the first Union officer to be killed in the Civil War, during his daring attempt to remove a Confederate flag from a boarding house in Alexandria, Virginia.

During ANTIQUES ROADSHOW’s June 2019 visit to the Winterthur Museum in Delaware, a guest named Frank brought in a pitcher decorated with a relatively little-known scene from a turbulent period of American history. It commemorates the death of Col. Elmer Ellsworth, a brash young Union commander and personal friend of Abraham Lincoln.

We have Ellsworth fallen, with the Confederate flag partially visible on the side, the bayonet going through Jackson…And on the other side, it’s embossed with Jackson’s name, and just below that, ‘The Traitor.’ As we turn it around, the imagery continues. We have a beautiful large Union eagle, and it has the snake, representing the Confederacy, in its talons.

Ellsworth’s death on May 25, 1861, at the Marshall House in Alexandria, Virginia, was the first casualty suffered by a Union officer at the very beginnng of what was to become a deeply divisive and extremely bloody chapter in American history.

But who was Elmer Ellsworth, and exactly what happened on that fateful day in 1861, subsequently commemorated on the pitcher Frank brought to ROADSHOW?

A Confederate Eyesore in Alexandria

The incident unfolded around Ellsworth’s attempt to remove a Confederate flag being flown over the Marshall House by its owner, James Jackson, a sympathizer with the Southern cause who was apparently well known for his violent disposition. The flag he flew atop his boarding house was so large it reportedly could be seen through a spyglass from the White House, 10 miles to the north across the Potomac.

Virginia had just ratified its secession from the Union, and President Lincoln had called for a large enlistment drive to help defend Washington, D.C., situated in perilous proximity to the newly secessionist state of Virginia. Ellsworth had grown close to Lincoln working for the future president as a law clerk in Illinois and assistant in his presidential campaign the previous year. Now, at only 24 years of age, Ellsworth was commissioned as commander of an infantry regiment he had helped raise — the 11th New York Volunteers, or the so-called First Fire Zouaves — who were assisting in the Union effort to occupy Alexandria.

On Friday, May 24, having entered Alexandria with his regiment, Ellsworth personally approached the Marshall House with a detachment of four troops, determined to take down the Confederate flag proudly flying from the roof. He was in the process of removing it when he was confronted by Jackson, who shot the colonel in the chest at close range, killing him. In response, one of Ellsworth’s men, Francis Brownell, shot and bayonetted Jackson, who also died.

News of Ellsworth’s death reached Lincoln quickly. Devastated, the president is reputed to have said, “My boy! My boy! Was it necessary this sacrifice should be made?” Lincoln directed that his young friend’s body be brought to Washington to lie in state in the East Room of the White House before being sent home for burial in Mechanicville, New York.

Read the full story of Elmer Ellsworth’s life and tragic death in this 2011 article from Smithsonian Magazine, "The Death of Colonel Ellsworth."

See the original appraisal in our Archive:

Concerning Confederate Materials in the Marketplace
ANTIQUES ROADSHOW seeks to balance cultural sensitivity with its aim of examining the full spectrum of America's antiques and collectibles.