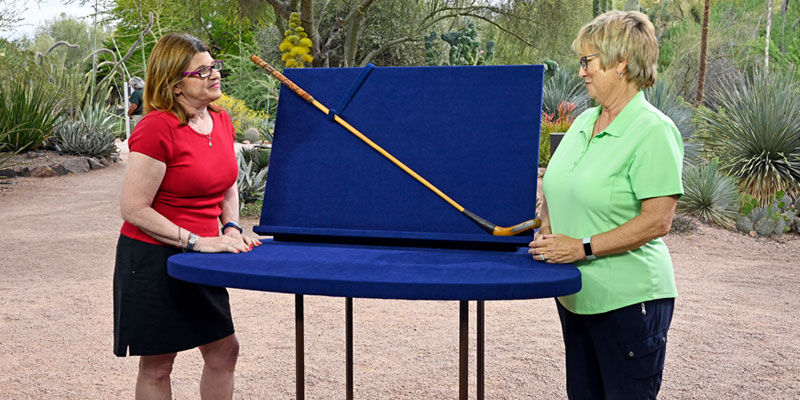 Sports Memorabilia appraiser Leila Dunbar left ROADSHOW's 2019 Desert Botanical Garden event with a few questions still circling about one guest's antique Scottish golf club. About a week after the event, she contacted ROADSHOW with news of her latest research.

During ANTIQUES ROADSHOW’s April 2019 appraisal event at the Desert Botanical Garden in Phoenix, Arizona, Sports Memorabilia appraiser Leila Dunbar met a guest who brought in a handsome wooden golf club from a bygone era of the sport — a “long nosed play club” with some puzzling characteristics.

The clubhead bore an embossed stamp of the name Stewart, but overall the club appeared to be constructed with parts of different styles — a fact that Dunbar said prevented her from clearly identifying the club’s provenance, authenticity, and origin.

Before teeing off her on-camera appraisal, Dunbar reached out to three different specialists who provided their opinions on the club. Yet their input still left her and her guest Jane Crafter, an Australian-American professional golfer and ESPN golf broadcaster, scratching their heads.

According to the specialists, there were a few different possible explanations: perhaps most obviously, the club could have been owned by someone named Stewart who had his name stamped on the clubhead; it could have been remodeled using the original shaft and a newer head; or "Stewart" could refer to one of a few different golf club designers of that name from around the turn of the century. These questions were still unresolved when the cameras rolled on Dunbar's appraisal in Phoenix last April.

About a week later, however, Dunbar got back in touch with ROADSHOW producers with news that she’d taken one more swing at solving the riddle of Jane Crafter's mysterious club. One of the specialists she had initially reached out to, Jeff Ellis, lived very close to Crafter, and was able to examine her club in person. Dunbar and Ellis then put their heads together and landed on an answer. In a subsequent email to ROADSHOW, Dunbar explained:

“The shaft is a little older than the clubhead, and was used with another head before it was attached to the Stewart head, which was likely made in the early 1890s by an obscure club maker named Stewart (we did find several Stewarts who were working at British golf courses during that time period).”

During a recent phone conversation, Dunbar elaborated further: the original owner must have favored this particular club and eventually broke the head off from extended use. From there, the owner would have gone to a local pro/greenskeeper to have a similar head crafted and reattached to the shaft. It was probably a short-lived solution, however, because with extensive wear to the shaft and grip but only minimal markings on the newer clubhead it's pretty clear that the new club never saw much playing time.

The one bogey in all this may be that since we now know the Stewart head was married later to an older shaft, the auction value of Jane’s golf club is diminished slightly — it's now more in the $400 to $600 range.

But despite that drop, Dunbar stands by what she called it in Phoenix: “a beautiful work of art.”

See the club up close below!

Newer clubhead with "Stewart" stamp.
About the Author Melanie Albanesi
Melanie Albanesi is an associate digital producer for ANTIQUES ROADSHOW.
More from PBS