BOB ABERNETHY, anchor: Now our special report on the life, the plight, and the humor of the Dalai Lama. Forced out of Tibet by the Chinese in 1959, living in exile with little apparent chance of returning, the Dalai Lama remains one of the world’s foremost symbols of hope and nonviolence. How does he keep from hating those who are destroying his country? What does he think about when he meditates for five hours every morning? 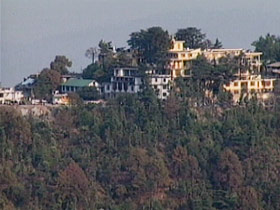 Religion & Ethics NewsWeekly was invited to interview the Dalai Lama at his exile home in Dharamsala, India. Our correspondent Lucky Severson brought back this exclusive report on His Holiness, the 14th Dalai Lama.

LUCKY SEVERSON: Carved out of a mountainside in the hazy foothills of the Himalayas, this is Dharamsala, India. Most of the faces you see in Dharamsala are Tibetan, and they are here because this is the home of their exiled spiritual and political leader — some say he is a god-king — the 14th Dalai Lama.

If I stop you or interrupt you to ask you a question, will you get angry with me? 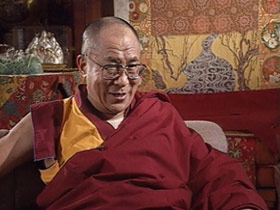 SEVERSON: Then I won’t interrupt.

For a man with the weight of his oppressed people resting squarely on his shoulders, his eyes sparkle, his curiosity consumes, and he laughs easily, a huge, contagious laugh impossible to resist.

(to Dalai Lama): People who meet you are always amazed that you enjoy life so much. You savor every moment like a fine wine. How do you do that?

DALAI LAMA: My mental state, I think, and hopefully at a comparatively more peaceful, I think. Inside, you see, different situation, some sad sort of frustrations. But it never remain long. This is something like the ocean. On the surface, the wave comes and go, comes and go, but underneath always remains calm.

SEVERSON: A fitting description of a man whose name, Dalai Lama, translated, means “ocean of wisdom,” a man millions of Buddhists believe to be the reincarnation of the 13th Dalai Lama, who died in 1933. After his death, the monks of Tibet began a long search for the 14th Dalai Lama. Following heavenly signs along the way, they found a two-year-old Tibetan boy who instantly grabbed the string of prayer beads owned by the Dalai Lama number 13. The boy was Lhamo Thondup, and he passed a critical test when he selected from a large group of objects only those that had belonged to the 13th Dalai Lama. 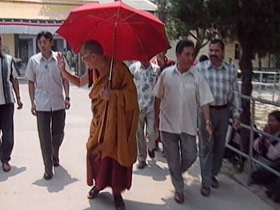 I’ve been told that you are the reincarnation of the 13th Dalai Lama. You are the 14th. If you’re the Dalai Lama now, how can you top that in the next life?

DALAI LAMA: This question — I don’t know how to answer. From the Buddhist view, your questions are not very smart.

SEVERSON: From the Buddhist view, the answer is the 14th Dalai Lama will be reincarnated as the 15th Dalai Lama.

Mr. JAMYANG NORBU (Tibetan Scholar and Writer): The institution of the Dalai Lama is also a creation of the Tibetan people’s genius, their religious genius.

SEVERSON: Jamyang Norbu is a Tibetan scholar and a writer whose family has served the Dalai Lama for generations. 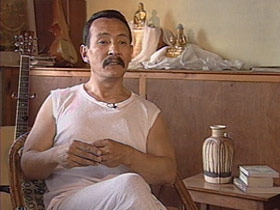 Mr. NORBU: So it’s not like he has a choice in a lot of matters here. So sometimes I think he finds it very frustrating, maybe even limiting in a sense.

SEVERSON: Do you ever get lonely?

DALAI LAMA: No. When, of course, when I was young.

SEVERSON: When he was a little boy with no time to grow up and no friends, traveling with an entourage of hundreds, a prisoner of the status.

DALAI LAMA: Sometimes feeling, “Oh, the Dalai Lama’s way of life is boring.” As a grown-up, I realize my own responsibility or rule. 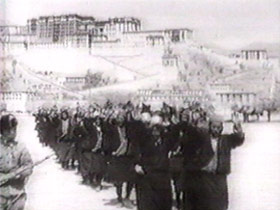 SEVERSON: When he was 15, while the West looked the other way, Chinese Communists invaded the world’s only theocracy, ultimately destroying 6,000 monasteries and slaughtering as many as a million Tibetans. Finally in 1959, his life in great danger, the Dalai Lama escaped to India. Forty years later, his life is not what it would have been. His followers, in addition to the six million Tibetans, now include millions of people around the world. His influence is larger than life.

Some people have described you as a god-king. Forgive me, but what are you?

SEVERSON: Just a human being, perhaps, but look in the eyes of those who have come here to get a glimpse of the man. He always seems a bit embarrassed by the attention, as if to say, “Hey, I’m just one of you.” But he is most comfortable when he is doing what he does hours every day, usually alone, chanting and meditating. 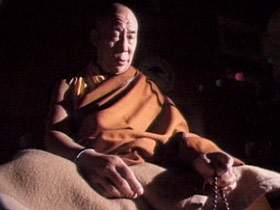 DALAI LAMA: Meditation. Sometimes meditation with a little sleep. Otherwise, from 3:30 and around 8:30 or 9.

DALAI LAMA: Including my breakfast. Otherwise, this is some prayer; mainly, it’s the analytic — analytical meditation as I mentioned earlier, analyze, think, think, think.

DALAI LAMA: Analyze what thought or emotion is beneficial, what is harmful. Analyze clearly, then find out the contradictions among these different kinds of emotions or thoughts. Then once we realize now this emotion, such as hatred, is very bad, very harmful, very harmful for health, very harmful for mental peace and also is harmful to the society. Then find out what is opposite or thought: love, love and kindness, compassion.

SEVERSON: It is a spiritual philosophy that has beckoned to millions of Americans and westerners.

Are you looking for converts in the West and America? 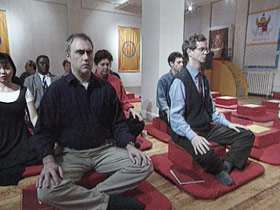 DALAI LAMA: No, never. That’s a mistake. I have firm belief the people like westerners, like Americans, you have Judeo-Christian traditions. So generally, you, your people, should keep your own traditions, should not change your faith.

SEVERSON: Is it possible for me to be a good Christian and still be a good Buddhist?

DALAI LAMA: Now already I’ve found to some of my Christian brothers, sisters, you see, very good Christian, very faithful to the concept of creator, but at the same time, taking some Buddhist methods or Buddhist technique either to increase the spiritual forgiveness or the tolerance and compassion.

SEVERSON: Even though casual Buddhism can complement Christianity, His Holiness says at the core, there is a fundamental difference.

You see, you unify or mixed both, then difficult. Sooner or later, clash. 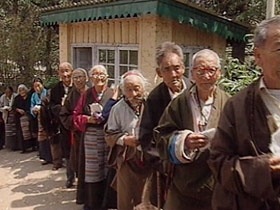 SEVERSON: For the people who come here — and they arrive by the hundreds — the Dalai Lama himself is reason enough to keep the faith. Many are Tibetans who have made the treacherous journey across the Himalayas to escape Chinese oppression. It is a painful reminder of his burden to free his people and get his country back.

He is a king without a country, the holy man locked away from most of his people. Here in Dharamsala, India, the Dalai Lama has heard the firsthand reports of oppression, imprisonment, and the cultural genocide of his people. But throughout it all, he has steadfastly preached compassion and nonviolence.

Instead of fighting with the Chinese, he has spent most of his life negotiating, compromising, telling his people to be patient; their time will come. But it is a message that is wearing thin.

Mr. NORBU: The Chinese — they don’t have to listen to him at all. And these are people who are playing hardball. And in that sense, I feel sometimes that His Holiness is out of his depth there. 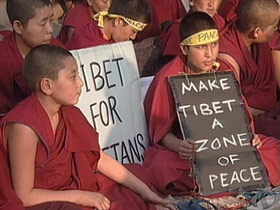 DALAI LAMA: My middle approach is strict nonviolent principles, although immediate result or effect on the Chinese government level so far is no result, no effect.

Mr. NORBU: I think a person who is at the moment — who by his own admission is tremendously confused, who is tremendously frustrated by the lack of any kind of response from the Chinese to his overtures, and a person who, in a sense, who feels he has failed.

SEVERSON: These are pictures of a man who burned himself to death last year to protest the Chinese occupation, and the man has become a martyr and a symbol that young Tibetans in particular are growing impatient. 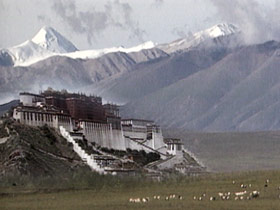 Ms. DOMA CHOPEL (Tibetan Youth Congress Spokesperson): Do you know, whatever we have done, we tried and we did in a nonviolent path. But we don’t know what the people demands, like if a time demands then maybe Tibetan people’s ready to sacrifice, they die for their own fatherland.

SEVERSON: But the way His Holiness has analyzed the situation, violence would only bring violence, even a bloodbath. Violence and hatred, he says, are what is wrong with nations and families in this modern world.

DALAI LAMA: I see many tragic situations which we are facing today at an international level or a national level, family level. I feel that we are in generally, among humanity, in modern time, we are lacking peace of mind. We need human values. Unhappy person, if utilized these inner value, can be happy person. The troubled family can be peaceful family. Not through money, not through other means.

SEVERSON: The 63-year-old Dalai Lama is convinced that he will return to the Potala Palace in Tibet in this lifetime. For Religion & Ethics NewsWeekly, I’m Lucky Severson in Dharamsala, India.