BOB ABERNETHY: And now, our Perspectives segment: the views of former President Jimmy Carter at age 75. As he has since he was 18, Mr. Carter teaches Sunday school, most Sundays at his little Baptist church in Plains, Georgia. This week, President Carter was in New York signing the new paperback edition of SOURCES OF STRENGTH, his collection of 52 of his favorite Sunday school lessons over the past 20 years. 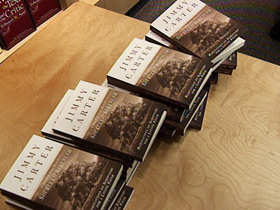 Meanwhile, Mr. Carter’s primary vocation is trying to prevent conflicts, promote democracy, and fight hunger and disease in the poorest parts of the world. He spoke with us about his deep concern that since the end of the Cold War, the world’s very poor have received too little humanitarian aid from the United States. We talked at Random House, his New York publisher.

Former President JIMMY CARTER: It’s very disturbing to me, as a former president, that this nation, with generous people in it, has become by far the stingiest nation on Earth. Every time an American gives a dollar to alleviate hunger or alleviate poverty or to promote freedom in an African nation, for instance, every time we give a dollar, a Norwegian gives $20. Every industrialized nation in the world is more generous than we are.

ABERNETHY: Right now there are economic sanctions imposed against Iraq and Cuba.

ABERNETHY: The goal is to punish those country’s leaders, but very often it’s the ordinary people who are hurt the most. What do you make of those sanctions?

Mr. CARTER: I know they’re tragic mistakes. And I know personally how devastating the so-called sanctions are against the people that we’re trying to help. What we do is exalt the oppressive dictators — we exalt Saddam Hussein, we exalt Fidel Castro — in the minds of their own people as heroes who are fighting against the oppressor in Washington. And all of the human problems that are caused, and economic and social problems that are caused by the dictators themselves are blamed on the United States of America.

ABERNETHY: I want to ask you some questions about domestic political life. 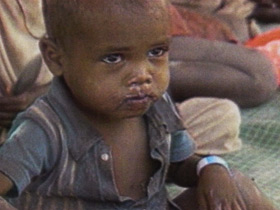 ABERNETHY: What’s your assessment these days of the power of the religious right?

ABERNETHY: There’s a debate under way, as you know, about the proper relationship between government — government money and religion-based, church-based, social service ministries. Where do you come out on that?

Mr. CARTER: I come out, I guess, on what would be considered the more conservative, that there ought to be a total separation of church and state. So I don’t espouse and don’t approve of government grants to churches to carry out the ministry of Christ, which should be a direct responsibility of the members who profess to be Christians.

I mean, I’ve seen too many times on — and I’ve been part of it, the self-satisfaction of a homogeneous church congregation who feels very self-satisfied when we go to religious services every Sunday. And we dress in our nice clothes and we sit next to people with clothes just like ours, all of whom are affluent and self-satisfied and self-reliant and safe and well educated, and we don’t even know the people that live a half a mile away, who might not have any of the advantages that we have. I think one of the reasons that the churches that you mention have been successful in reaching out to the drug addicts or the alcoholics or the poverty-stricken person is because they do it on their own volition. And it’s the best way to break down the barrier that exists between us rich folks and the people in need. And that is what Jesus demonstrated.

ABERNETHY: Some of the candidates for the presidential nominations have been speaking out unusually openly about their religious convictions. What do you make of that?

Mr. CARTER: Well, I think it’s good. I think that they can do it and get away with it. When I first announced, as an answer to a question when I was running for president, that I was a born-again Christian, there was a great deal of consternation and furor about it. I think now it’s become kind of a routine thing. 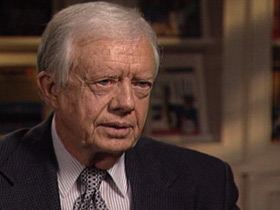 ABERNETHY: Did you make any decisions as president because of your religious faith that you might not have made if you had not been a religious man?

Mr. CARTER: I think that there’s no doubt that my faith did affect my decisions, but I don’t think that they distorted my decision away from the basic principles of our Constitution and laws.

ABERNETHY: Were you as restrained as you were in the Iran hostage crisis because of your religious faith?

Mr. CARTER: I think the answer to that question is yes. I prayed more when I was president that any other four years of my life. I prayed more during the year that the hostages were held than any other year that I was in office that I would have the patience to accomplish the goals that I established at the very beginning. I had two goals: one was to preserve the integrity of my nation and not do anything to embarrass my country, and the second one was to bring every hostage home safe and free. And I asked God to help me with those commitments. I could have launched a very popular military strike on Iran. I could have destroyed Iran, and in the process killed thousands of innocent Iranians, which would have also resulted in maybe the assassination or killing of the American hostages. I had advice to do that. I decided not to. And I felt, I guess, that God would answer my prayer. Well, I never did embarrass my nation or violate its principles — every hostage came home free — safe and free. So my prayer was answered. God answered my prayer later than I wanted. If my prayer had been answered a week before the election in 1980, I would have been a two-term president. But I understand that God answers prayers in different ways. Sometimes he answers, “Yes,” sometimes he answers, “No,” and sometimes he answers …

ABERNETHY: And sometimes he answers, “Wait.”

ABERNETHY: I also asked Mr. Carter about his daughter Amy. He said she’s doing just great. An accomplished artist, says her father. Married with a three-month-old son, described by his grandfather as “obviously well above average.”

Of his own success publicizing his books, such as SOURCES OF STRENGTH, Mr. Carter says it helps to get on television if you used to be president of the United States.