BOB ABERNETHY: Now, an update on the widely emulated and perhaps best known and most successful church-based program in the country fighting violence among inner-city youths. It's Boston's Ten-Point Coalition, religious leaders and police working together. Lucky Severson reports.

LUCKY SEVERSON: On Halloween night in 1990, in the city of Boston, a murder was committed against a young woman on an empty inner-city playing field in an act known then as a wilding. The woman, Kimberly Rae Harbrou, was beaten, raped, and stabbed over 132 times by eight teenage boys. Her death marked one of the lowest points in a decade of rampant youth violence in Boston. 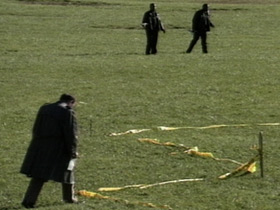 Lieutenant GARY FRENCH (Boston Police Department): In 1990, Boston set a record for number of homicides that we had. I think it was 157 homicides in a one-year period. Boston was unprepared for it, and we were still at that point not recognizing the fact that we had gang activity in the city of Boston.

SEVERSON: This year a very different scene played out on Halloween night in the same Boston neighborhood, at least here at Dorchester Temple Baptist Church. It is still a very dangerous area, but these hundreds of teens are not committing crimes. So how did Boston get from there to here?

Pastor Eli Hernandez is one piece of the solution. He is a former gang member who works and plays with the teens of his neighborhood.

Reverend ELI HERNANDEZ (Dorchester Temple Baptist Church): That's a whole new philosophy of this youth ministry. It's not the -- standing from a pulpit and speaking to these kids anymore. You know, it's not the -- it's having set standards, 'cause, really, it's about relationships.

SEVERSON: His youth ministry at Dorchester Temple is supported, in part, by the Boston Ten-Point Coalition, an organization of ministers founded in 1992 solely to meet the needs of kids at risk by mobilizing neighborhood churches. Some give it credit for what has been called the Boston miracle.

Dr. Ray Hammond is one of the coalition's founders. Both physician and pastor, he left medicine in 1992 for full-time ministry when he saw more afflictions of the spirit in his emergency room than he did traumas to the body.

Dr. RAY HAMMOND (Pastor; Boston Ten-Point Coalition): This is what I was called to do, what I was put on the planet for, not just 'cause it's the right thing to do. There's a personal debt that I owe. I grew up in a neighborhood like this in Philadelphia, and the opportunities that I had didn't just reflect my own effort. They had to do with sacrifices that were made by parents and friends and Sunday school teachers. And as the scriptures would say, "Of those to whom much is given, much is required." 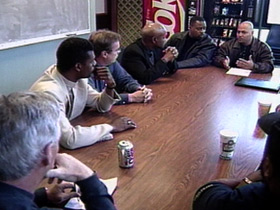 SEVERSON: The coalition works, in part, through a unique cooperative relationship between clergy and law enforcement, where information and strategies are shared to identify neighborhood problems and needs.

Unidentified Man #1: You will enjoy it.

Unidentified Man #1: And it flies by once you get in here and you talk to the kids, talk to the parents.

SEVERSON: The goal is to hold the really dangerous kids accountable and to help those who have simply gotten swept up in the storm.

Unidentified Man #3: They're really open to ministers coming in -- into their homes. They feel that they trust you.

SEVERSON: Sometimes the police take a hard line; sometimes it's the clergy.

For the most part, they back up each other's judgment calls.

Unidentified Man #4: We actually took a back seat, and we would have to control the tempo and the flow of the meeting.

SEVERSON: Is it difficult for you to say, "Hey, there's nothing we can do for this kid. Take him away?" 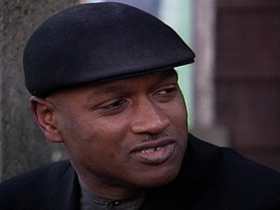 Dr. HAMMOND: No, and part of it is I'd probably say it a little bit differently. There's nothing we can do at this time. For his sake or her sake, most likely his, and for the sake of this community, the best place for them is to be in prison.

SEVERSON: It's not something I expected to hear a clergy saying.

Dr. HAMMOND: Oh, no. Well, if you care about people, sometimes you have to do things that are tough.

SEVERSON: This partnership has played an important role in cutting Boston's homicide rate by 77 percent.

But despite its remarkable success, the Ten-Point Coalition finds itself up against the wall. They need more help. Of the 561 churches in Boston, only 10 percent are actively involved with the coalition, and there are a lot of troubled neighborhoods.

Pastor Eli was placed at Dorchester Temple through a partnership of the coalition and Emmanuel Gospel Center. Their ministry is to create long-term support for him. His ministry is to build genuine, ongoing relationships with neighborhood teens. 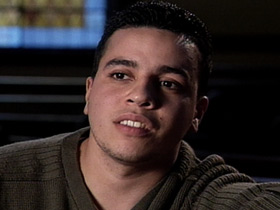 Rev. HERNANDEZ: By the time I was 19, I was in 14 different prisons, anywhere from drinking in public to attempted murder. And being involved in gangs myself, doing, you know, stickups and in prison and all that, I --that's something that I could bring to the -- to -- into the ministry and something I could bring to the kids when I talk to them.

SEVERSON: Eli takes his ministry into the streets outside the church, finding those who need to be loved.

SEVERSON: These relationships usually branch out to define the bonds between the teens he reaches and their own peers. Ruddy is an 18-year-old former gang member who was involved in everything from drug dealing to assaults. His initial interest in coming to Dorchester Temple involved a certain young lady. Now he comes to worship God and to reach out to others like himself.

Mr. RUDDY PIERRE (Former Gang Member): I know that I believe in God. If somebody else don't believe in God, you know, ain't nothing I can do, but I can sit there and talk to them about, "Hey, you know, would you ever take time to get to know God?"

BRANDON WOODS (Former Gang Member): I didn't really care then. I got rushed a couple of times, then started stabbing people and stuff and it just got hectic.

SEVERSON: He is in a very vulnerable place. 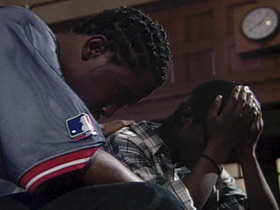 WOODS: I just felt that I needed to see God. I guess I need him a lot more. A lot of them don't believe in God.

Rev. HERNANDEZ: You take this -- a gangster who has been used to total loyalty. You know, they die for each other, right?

SEVERSON: And the commitment, so far, is there. 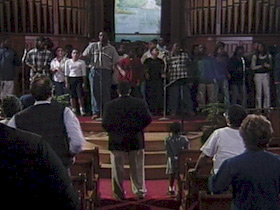 SEVERSON: Eli's ministry is exactly what Reverend Ray Hammond wants to see happening in dozens more of Boston's neighborhood churches over the next five years. During that time the coalition predicts a rise in Boston's urban teen population from about 40,000 to 60,000, and many of those kids won't remember the violent past.

Dr. HAMMOND: We got a group of kids who think it's interesting, it's cute, it's fun to play around with colors, Crips, and Bloods. We're going to face a demographic bubble, and a significant number of those kids are going to be [in] what we call the at-risk category.

SEVERSON: Dorchester Temple's Halloween hip-hop party represents not only a celebration of Boston's success in combating teen violence but a promise of hope for everyone who has been involved.

Rev. HERNANDEZ: They all have something to offer. I talk to any of my teens and they have desires, they have a vision for themselves, something that they want to accomplish. I've heard one teenager tell me, and this was -- it was -- he said it in the form of a joke, but I took it seriously -- he tells me, "I want a white picket fence, too." And he was laughing about it, but I knew he was serious, too. The Bible says that, "From the abundance of the heart, the mouth speak[s]," and he was speaking what he was in his heart.

SEVERSON: For RELIGION & ETHICS NEWSWEEKLY, this is Lucky Severson in Boston.

Dorchester Temple Baptist Church is home to what is perhaps best known and most successful church-based program in the country fighting violence among inner-city youths. Through Boston’s Ten-Point Coalition, religious leaders and police are working together to make the area safer for all.