LUCKY SEVERSON, correspondent: Sunday Mass at Sacred Heart in Camden, New Jersey. This is a special one that, sadly, has become a tradition.

SEVERSON: For 18 years, Father Doyle has been conducting a Mass for the Murdered. 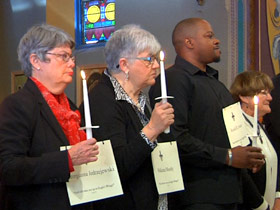 FATHER DOYLE: I counted up this morning the number of murders since we started in 1995, and the number was 788. Imagine. In this little town, 788 persons lost their lives in this city in that tragic fashion.

It’s a terrible place for a kid to grow up. It’s terrible. It is terrible, and that’s why I—and I think of America as being a generous country, but America has made a decision to sacrifice the poor, for the poor are concentrated in this country. You go from one city to another; they’re concentrated. That concentration is deadly.

SEVERSON: Nowhere, according to the most recent census, are the poor more concentrated than in Camden. Nearly half the population of 77,000 lives in poverty. Unemployment is almost 20 percent. You can buy a house here for as little as $15,000. Across the Delaware River in the shiny city of Philadelphia, houses go for as much as $15 million.

It’s not just the poverty, not only the neighborhoods that look like they’ve been bombed out. It’s the crime. In 2012, there were 266 shootings, 67 homicides, which makes Camden per capita, according to the FBI, the most dangerous city in the U.S. 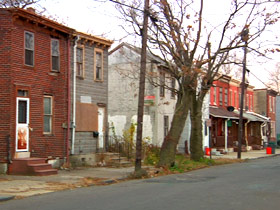 SEVERSON: Seventeen-year-old Julian Jaquez knows how scary it is here.

FATHER DOYLE: Ninety percent of that is coming out of drug wars, and the prevalence of guns and the anger within young people. It’s slaughter. So when you look at that, Camden is worse than when I came here 39 years ago.

SEVERSON: Father Doyle came here not long after race riots dealt Camden a serious blow. The Vietnam War and protests against it were in full swing. He, along with Father Daniel Berrigan, still his close friend, were arrested as part of the famous Camden 28, charged with breaking into a government building to destroy draft records. It was a world away from his home in Ireland, where he goes to rejuvenate.

FATHER DOYLE: I have the best place in the world—the farm on which I was born and raised, and my family for four generations. I’m so at home and nurtured, like back in the womb. It’s an amazing kind of thing.

SEVERSON: And then he returns to Camden, which he refers to as a “peoplefill”—a landfill for poor people. But he sees beauty here. 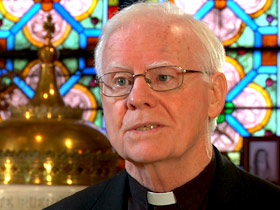 SEVERSON: He’s not a fire-and-brimstone preacher, but his faith is intense.

FATHER DOYLE (to congregation): I just want to say how thankful I am for the blessing of you here.

Hi Lally, how you doing?

Lally: Hi Father, how you doing? Praise the Lord! 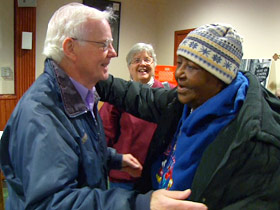 SEVERSON: And they love him not just as Father Doyle, but as a man of God who refuses to give up.

FATHER DOYLE: I’m drawn back because it’s a place where a church is of value.

SEVERSON: Few would argue about the value of Father Doyle and Sacred Heart to Camden.

ROSEANN SELLANI: Actually, we’ve built this whole thing around Michael Doyle. He’s the most wonderful person in the world. He lives a real Christian life. It's just wonderful. We love him.

FATHER DOYLE: We practiced this yesterday. She did very well.

SEVERSON: This is a weekly Saturday morning food sharing and prayer service. They give away food freely here, but mostly to women.

SUSAN CEDRONE: Because women are the feeders of the children, and we have found that sometimes the men come and then we find them selling the food on the street.

At prayer service: Come, Holy Spirit, and inspire us with energy and willingness to rebuild Camden City to your honor and glory. Amen! 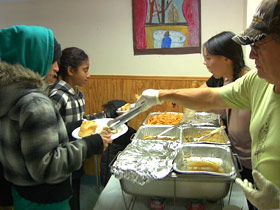 SEVERSON: Sacred Heart also funds a food kitchen, and there’s always a full house. And then there is the Sacred Heart primary school for 200 kids. Most of them are not Catholic. Father Doyle was worried that the diocese would close Sacred Heart, as the church has so many inner-city schools.

FATHER DOYLE: And so we created a sponsorship. We set it up that people would give $300 a year, and that would help the family to get the child through.

SEVERSON: Many in the congregation who are Catholic come from as far away as 50 miles to attend Mass. They, and hundreds on the mailing list, get epistles each month from Father Doyle containing homilies and poetry and a request for help. In 2012, he raised more than $900,000. Camden Mayor Dana Redd, a Baptist, attended Sacred Heart school after her parents died from gun violence. Here’s a picture of her giving flowers to Mother Teresa when she visited the parish.

MAYOR DANA REDD: I can say that Sacred Heart really played an important role in shaping and framing the person that I am today. They were my extended family in so many respects.

SEVERSON: Julian’s mother helped pay for his schooling at Sacred Heart. His father wasn’t around. 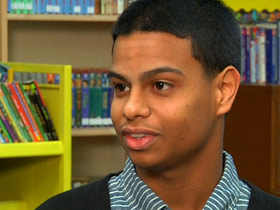 JAQUEZ: I do sometimes wonder, like, what would my life be like if I had that perfect family. But then I think about the people who don’t have what I have. I mean, it’s bad, but there’s people who have worse.

SEVERSON: Helene Pierson has been in charge of Father Doyle’s Heart of Camden project, which has now purchased, refurbished, and resold close to 250 homes at reduced rates for those who could never afford a house before.

PIERSON: The houses were going empty in Camden so fast at that time in the early ‘80s that we moved people in—volunteers rehabbed the house and their credit was poor. Now the percentage is almost 100 percent.

SEVERSON: That make their payment?

PIERSON: That make their payments.

CRISTYA RODRIGUEZ (to Father Doyle): I’ll be moving in either Friday or Monday. 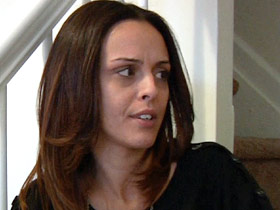 SEVERSON: Cristya Rodriguez is so happy she can hardly contain herself. She and her two boys are moving out of her mom’s house and into a Heart of Camden house which she can own for $600 a month. She recently got a job at the police department.

SEVERSON: Father Doyle says what keeps him going is one little victory at a time.

FATHER DOYLE: Even when Jesus was here, he cured 10 lepers, and nobody asked him how many lepers are in the quarries? So I always go by that principle. My bit in God’s hands is enough. I do that little bit, that's all I can do. So I don’t take all of Camden into my head, or my heart. I just take a bit of it.

SEVERSON: The day before the special Mass there was a ceremony across the street from Sacred Heart planting crosses for those who have fallen in the last 12 months. Cristya was there with her two boys, whose father was gunned down in 2012, and Julian was there to honor his close friend, Juan Rosa. 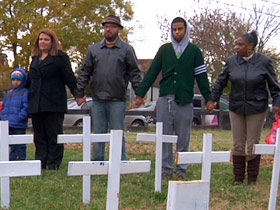 SEVERSON: When the stand-ins for the murdered stand together, shoulder-to-shoulder, the magnitude of the loss is overwhelming.

SEVERSON: “You can do it anywhere.”

FATHER DOYLE: That’s right. You can do it anywhere. We’re working against the odds, but I think God is on our side.

According to Father Michael Doyle, crime and poverty in Camden, New Jersey are worse today than when he first arrived there 39 years ago. But through his church’s ministry of feeding, housing, and educating the poor, Father Doyle sees hope for what the FBI considers the most dangerous city in America. “We’re working against the odds, but I think God is on our side,” he says.