BOB ABERNETHY: There was surprisingly sharp reaction this week to Senator Joe Lieberman’s call last Sunday for more religious faith in American public life. Here’s part of what the Democratic vice presidential candidate said at a black church in Detroit.

Senator JOE LIEBERMAN (Democrat, Vice Presidential Candidate): As a people, we have to reaffirm our faith and renew the dedication of our nation and ourselves to God and God’s purposes.

ABERNETHY: Lieberman’s words may not have seemed controversial to many people of faith, but they triggered immediate and widespread concern, remembering past discrimination against religious minorities. The leaders of the Anti-Defamation League said, ‘An emphasis on religion in a political campaign becomes inappropriate and even unsettling in a religiously diverse society such as ours.’ Americans United for Separation of Church and State worry that ‘When religion is used repeatedly in the context of a presidential campaign, faith then becomes a political tool. Manipulating religion in this fashion,’ said Americans United, ‘cheapens and exploits religion for partisan ends.’ For his part, Lieberman called the concerns a ‘bit of an overreaction’ and made no apology. He said all he was saying was that faith has a constructive role that it can play in American life.

BOB ABERNETHY: The week’s debate made clear that the proper place for religion in a political campaign is a red-hot button, a volatile issue with unclear boundaries, not just for candidates, but for organizations too. Kim Lawton has a special report from Augusta, Maine. 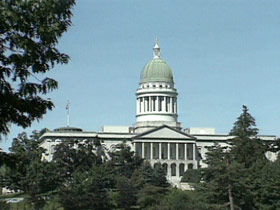 KIM LAWTON: Summer’s lazy beauty is still reflected all over the state of Maine. But in the capital city of Augusta, just down the road from the State Capitol building, members of the Christian Civic League are getting ready for an autumn of hard work. The Christian activist group wants to influence the November elections, particularly on three state referendum issues: casino-style gambling, doctor-assisted suicide, and expansion of gay rights. The league is opposed to all three and its members believe they have a moral responsibility to campaign for their beliefs.

Mr. MICHAEL HEATH (Christian Civic League of Maine): All us Christians have to be faithful to get involved and to speak honestly about what — how our convictions are in relationship to a candidate or the issues.

LAWTON: As the fall election season cranks into high gear, people across the religious and political spectrums are hoping to have an influence. Finding the appropriate legal and ethical boundaries for how that is worked out in the political arena, can, indeed, be tricky.

Dr. ROBERT FRANKLIN (PhD; Interdenominational Theological Center): It’s a creative tension. It’s a dialectical dance between church and the state along that border. 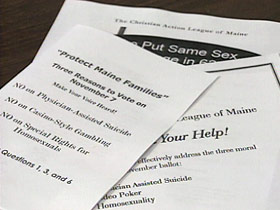 LAWTON: According to IRS regulations, churches and other religious tax-exempt groups cannot get involved in the political campaigns of candidates — no organizational endorsements, no campaign donations, and no fund raising for individual candidates. But even the IRS admits what’s permissible can depend on the individual facts and circumstances in every case. In May, a U.S. appeals court upheld an IRS decision to revoke the tax exempt status of The Church at Pierce Creek, an evangelical church in New York that took out a political ad in 1992 warning Christians not to vote for Bill Clinton. And the Christian Coalition is fighting several battles over the distribution of its voter guides, which rate candidates on a series of issues. Under dispute is whether the guides are unfairly biased to favor Republican candidates. But where are the boundaries? Can a religious group host a political candidate of just one party?

LAWTON: Can campaign signs be placed near or even inside religious buildings?

Can re-election literature, even in the form of church fans, be distributed at churches? And just how supportive can religious leaders be?

LAWTON: At the Republican National Convention, the Reverend Herbert Lutz and the Greater Exodus Baptist Church were beamed in via satellite. 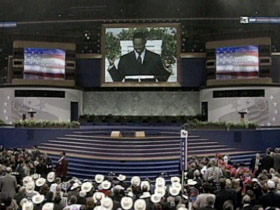 Reverend HERBERT LUTZ (Greater Exodus Baptist Church): We are supporting Governor Bush, and we are supporting him because we know that he understands that we must give faith a chance.

LAWTON: The next day, Americans United for Separation of Church and State wrote a letter urging the IRS to investigate whether the church should lose its tax-exempt status. Several months earlier, the group also urged the IRS to investigate minister and former New York Congressman Floyd Flake, after he expressed support for Al Gore from the pulpit.

Mr. BARRY LYNN (Americans United for Separation of Church and State): I like the idea of walking into a sanctuary and smelling incense. I don’t want to smell cigar smoke that’s coming from the church basement where they’re having some big meeting for all the Democratic or Republican hacks in town.

LAWTON: Since the earliest days of the nation, religious groups have tried to influence the political process based on their religious beliefs, from the abolitionist movement to prohibition, for suffrage and civil rights. 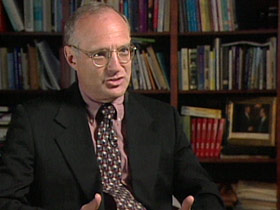 Rabbi DAVID SAPERSTEIN (Religious Action Center of Reform Judaism): There’s a long tradition in America that religious groups have a right and an obligation to fulfill their prophetic mandate, to be a moral goad to the conscience of the country.

LAWTON: The Christian Civic League of Maine was founded more than 100 years ago to support the prohibition of alcohol. Over the years, the league has refocused its concerns to include other issues, such as opposition to abortion, gambling, and gay rights.

Mr. HEATH: Christians have an obligation to get into the mix and to make arguments that are consistent with what the Bible has to say.

LAWTON: League members believe political campaigns are a key way to influence the culture with their beliefs. Mike Heath travels across the state of Maine trying to rally others to the cause.

Mr. HEATH: I probably spend about 25 percent of my time driving through Maine, a lot of time on the weekends because I speak in churches. 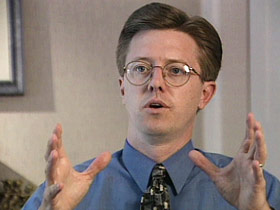 LAWTON: On this day, Heath went to a church in Bangor, where he addressed a group of pastors.

Mr. HEATH: Join us in being faithful this fall to tell the truth about the — these profound moral questions.

LAWTON: In an attempt to comply with IRS regulations, the league has created three separate entities with three different tax statues. Two are allowed to engage in some politicking, but it isn’t always easy to differentiate which activities fall under which category. Religion and politicking also has a complicated relationship in the African-American tradition, where the black church has long been the strongest organizing institution.

Dr. FRANKLIN: It’s clergy. We’re always the most literate members of the community, and naturally became interpreters of political reality for the larger community. 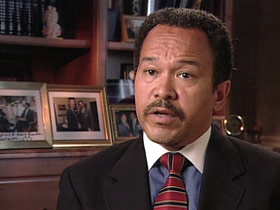 LAWTON: Over the years, the IRS has not moved against politicking inside African-American churches. This has led to the appearance of a double standard, one for conservative white churches and another for politically liberal black churches. Some African-American leaders admit it may be time for special exemptions to come to an end.

Dr. FRANKLIN: In the post-civil rights movement period, we have an opportunity now to become assimilated to join the larger game and, hence, will have to conform to the rules of that game.

LAWTON: Legalities aside, many believe there are moral and ethical considerations religious groups should voluntarily take on as they delve into politics.

Professor JEAN BETHKE ELSHTAIN (University of Chicago): They shouldn’t seek to control the government for one particular denomination, that they shouldn’t assume that those who disagree with them on a political issue are somehow people whose faith isn’t as rich or isn’t as deep as their own. 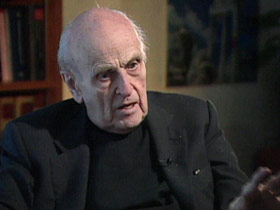 LAWTON: Father Robert Drinan is a Roman Catholic priest who also served in Congress for a decade. He sites the electoral example of the Catholic bishops.

Father ROBERT DRINAN, S.J. (Georgetown University Law Center): They put out a brochure: Here are the 10 or 15 social issues that Catholics should consider before they vote. Abortion is one of them. It is not highlighted. It’s there with poverty and hunger and world aid. People have this available, but in no way can you say that the Catholic bishops say you have to vote thus and so.

LAWTON: To do otherwise, some say, would be to compromise the religious voices that have enriched the social and political process.

Prof. ELSHTAIN: The American tradition has been one of saying church-state separation, yes, but religion in politics is something else. There we have a very close and complicated working relationship, and sometimes people are going to take positions from the pulpit of a political nature, hopefully of a rather general nature, about reminding people of the core commitments of their faith and then suggesting there are some political implications of this.

LAWTON: Despite the complexities, religious people on the right and the left say they’ll still add their voices to this fall’s elections, ensuring that the tradition of controversy will also continue. I’m Kim Lawton in Augusta, Maine.

None of the Above: Political Implications