KIM LAWTON, correspondent: In the battleground state of Ohio, volunteer Monette Richards is making calls for state and local Democratic candidates. She wants to encourage liberal voters, and especially those who support abortion rights, to get out to the polls next month.

LAWTON: Richards is part of a growing force on the political scene: the 46 million Americans who say they are not affiliated with a religion. Their numbers have been rising rapidly, and they are heavily Democratic.

PROF. JOHN GREEN (University of Akron): Something like a quarter of people who identify with the Democrats or lean towards the Democratic Party are in this unaffiliated category. That’s a lot of votes. That’s a major group. 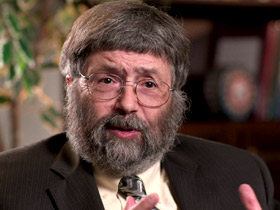 LAWTON: Professor John Green directs the Bliss Institute at the University of Akron and has long studied the relationship between religion and politics.

GREEN: Religious affiliation has often been closely associated with the major party coalitions, with the Democrats and the Republicans each drawing on different religious communities, and sometimes fighting over religious communities that are pretty evenly divided between the two parties. Well, as people are less involved in organized religion, then those relationships change.

LAWTON: The religiously unaffiliated, often called “the nones,” are about twice as likely to describe themselves as political liberals than as conservatives, and they strongly support legal abortion and same-sex marriage. In a breakdown by faith group, the religiously unaffiliated are now the largest constituency for Democrats, outnumbering black Protestants, white mainline Protestants and white Catholics. 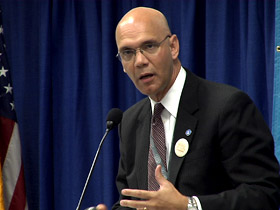 LAWTON: Although people of faith all together still make up the majority of the Democratic coalition, for many years, the Democrats battled a perception that they were not as friendly toward religion as the Republicans. As director of faith outreach for the Democratic National Committee, Reverend Derrick Harkins has been working to change that perception.

REV. DERRICK HARKINS (Democratic National Committee): People of faith make up a significant and important and valuable part of who we are as Democrats and that’s across the spectrum of faith traditions.

GREEN: How do they for instance get the black Protestant churches to mobilize voters and to be very enthusiastic about their platform and their candidate without turning off unaffiliated voters, and how do they appeal to those people and get them involved and excited about the candidate without alienating some of the religious communities that support the Democratic Party? It’s a really interesting problem.

LAWTON: Harkins asserts that the Democratic tent is wide enough to accommodate all.

PRES. BARACK OBAMA (in inaugural speech): We are a nation of Christians and Muslims, Jews and Hindus – and nonbelievers. 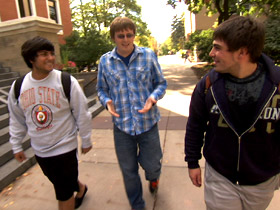 LAWTON: The rising number of religiously unaffiliated may be posing new challenges for the Republicans as well. Although they still make up only about 11 percent of the GOP, a disproportionate number of them are young. About a third of all adults under the age of 30 are “nones.” At the University of Akron, these members of the College Republicans say they aren’t affiliated with any particular faith. They worry that their party’s close relationship with the Religious Right could weaken its viability in the future.

MATTHEW MONEYPENNY (Student): It’s more about what they believe politically rather than religiously because that doesn’t really have an effect on society as much as it used to in my opinion.

LAWTON: According to our new survey with the Pew Forum on Religion & Public Life, almost 70 percent of the religiously unaffiliated say that churches and other religious institutions are too involved in politics. Only 46 percent of the general public agreed with that. 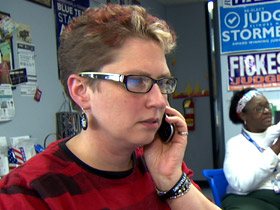 RICHARDS: When you can’t get into office unless you profess your religion and talk about how religious you are, it’s a very big problem for us.

LAWTON: Like most religiously unaffiliated voters, Monette Richards doesn’t want to hear politicians quote from the Bible or make other overt religious appeals. She believes candidates can eliminate the God-talk without alienating faith-based voters.

RICHARDS: I don’t know that there should be any offending or marginalizing the religious just simply because they aren’t pandering to them anymore.

LAWTON: But most Americans still do see a role for religion in politics. About two-thirds of the general public say it’s important for a president to have strong religious beliefs. A majority also say it doesn’t make them uncomfortable when politicians talk about their faith. In today’s politics, Republicans can’t win without strong support from evangelicals. And in this election season, several groups have been waging an active campaign to mobilize religious conservatives through churches and other religious institutions. The Faith and Freedom Coalition’s Ralph Reed has been spearheading efforts to turnout the evangelical vote. 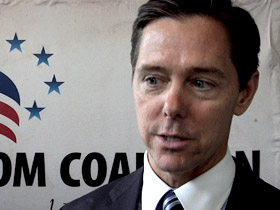 RALPH REED (Faith and Freedom Coalition): It’s one out of every four voters and if they turn out in huge numbers, they could really change the outcome of this election.

LAWTON: While both parties have projects to reach out to faith constituencies, many religiously unaffiliated voters say despite their growing numbers, they still feel neglected by politicians.

RICHARDS: We’ve been pretty much erased from any kind of election talk.

LAWTON: But how do you reach out to people who aren’t at the same place at the same time every week talking about their shared beliefs?

PHLIPOT: Religion it’s a great place for politics to find people is at church. So maybe that’s something we’ll have to figure out. You know in the future it’s going to be social media you know Facebook groups, stuff like that, Twitter handles. I think that’s something we should use more to utilize the people who are not church going. 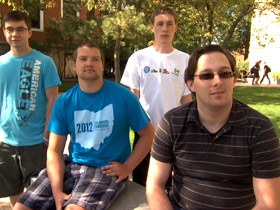 BRIAN CRISAN (Student): Religions have a very, they have a structure to their communities and a support network and though I don’t agree with many religious beliefs, I do believe having a support network is important.

LAWTON: Brian Crisan is part of the University of Akron’s Secular Student Alliance, which tries to provide that support to nonbelievers. This spring, Crisan and several other alliance members came to Washington, D.C. for the Reason Rally, which organizers billed as the largest secular gathering ever in America. One of the goals was to demonstrate their potential clout.

BRYAN POOLE (Student): There are definite political movements growing for atheism or people who particularly do not have religious affiliations and those particular organizations can help people basically find identity.

LAWTON: Richards also attended the Reason Rally and says she came away more inspired than ever to be politically engaged. She says she gets frustrated that religious conservatives have co-opted the term “values voters.” 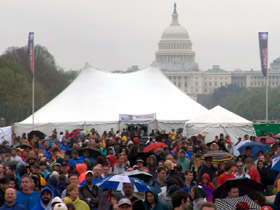 RICHARDS: It’s interesting that we still equate values sort of with piousness and piety and we need to change that association for us, so that we can move past that and know that values is just, you know, ethics and morals and just good people doing the right thing as opposed to, you know, reading the right book.

LAWTON: What values do you apply to your politics?

RICHARDS: Progressive, social justice. We’re all in this together kind of thing, it doesn’t have to be a me against you, Democrats vs. Republicans or anything. It’s, you know, move forward, help the people that need help.

LAWTON: Unaffiliated Republicans say they also want to be known as values voters.

LAWTON: One challenge may be getting those religiously unaffiliated voters to the polls. In recent elections, the “nones” voted at lower rates than their religiously affiliated counterparts. But given their rising numbers, experts say a politically organized and active movement of the unaffiliated could play a key role in the political landscape for years to come. I’m Kim Lawton in Akron, Ohio.