DERYL DAVIS: Looking at Quakers in silent meeting today, you'd never know they got their name because early adherents were said to quake with zeal during worship. Mostly now, they're contemplative -- listening in silence for the voice of God. Occasionally, they're moved to share the experience.

UNIDENTIFIED WOMAN: God is surely present in me, as surely as God is present in all of you.

DAVIS: Quakers have always combined their quiet listening for God's guidance with active work in the world, especially peacemaking. In the past century alone, they have helped start nearly 200 social service, environmental, and relief agencies such as the American Friends Service Committee. And, they are the only religious organization to win the Nobel Peace Prize. But, in spite of its many achievements, almost 350 years after its founding, the Religious Society of Friends -- as Quakers are formally known -- remains small in numbers. There are fewer than 120,000 members, or Friends, in the U.S. today. Not many more than 150 years ago. Douglas Bennett, President of Earlham College and Earlham School of Religion, recently oversaw a major study of Quaker life in America. 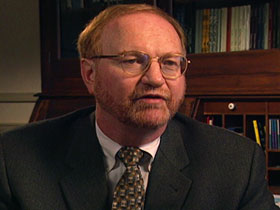 DOUGLAS BENNETT (President, Earlham College and Earlham School of Religion): There certainly are some Friends who are worried about Quakerism disappearing altogether. That our numbers may become so small that we disappear from the landscape.

UNIDENTIFIED MAN: Can we puzzle through that?

DAVIS: Why aren't there more Quakers? First, Quakers don't have a specific structure for handing the faith down to their children.

SALLY RICKERMAN (Philadelphia Outreach Committee): We teach Quakerism by osmosis, and osmosis does not always permeate from one body to the next.

DAVIS: And it's a difficult faith to live. Quaker ideals go against the grain of much in modern culture.

Generally, they don't fight in wars, refuse to swear oaths, are active in civil rights and peace movements, and live very simply.

Another reason Quakers have not grown more is their modesty.

BENNETT: Friends have had, especially in this century and the last century, a reluctance to go out and seek new members.

DAVIS: An additional cause may be Quaker theology itself, which takes many forms.

Margaret Fraser is dean of Pendle Hill, a Quaker retreat center near Philadelphia. 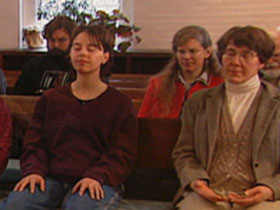 MARGARET FRASER (Dean of Pendle Hill): I think that God is revealed to different people in different ways, and there are many different paths to God.

DAVIS: But other Quakers, like Don Worden, are far more evangelical and conservative.

DON WORDEN (Evangelical Friends International): We believe that the Bible teaches that Jesus Christ is the one way to God.

BENNETT: Quaker identity is a complicated issue because there are several different varieties of Friends, and they don't always easily and smoothly get along with one another.

WORDEN: When you talk about divisions among Friends, they're pretty wide and they seem to be fairly permanent.

DAVIS: Call it the continental divide. Generally speaking, the farther east you go, the more liberal Quakers tend to be, often valuing personal revelation more than the Bible. Some don't identify themselves as Christians. And most eastern Quakers are called "un-programmed." They worship in the earliest Quaker tradition of silence: no minister, no sermon, no music. But a very different tradition predominates in the west. Most Quakers there believe the Bible is the infallible word of God. Evangelical Quakers favor a "programmed" style of worship, with sermons, hymns, a sanctuary and, in most cases, a pastor.

UNIDENTIFIED PASTOR: We really are glad that all of you are here today. And it's a great truth -- that God loves us and offers us the possibility of a victorious Christian life, of walking with Him day by day.

DAVIS: Today, some estimate that evangelical and programmed friends represent about 80 percent of all Quakers.

Carol Joy Berndlinger is one of them. But she's made an unusual journey east to Pendle Hill to learn about other kinds of Quakers.

CAROL JOY BERNDLINGER (Student, Pendle Hill): I'm in the process of trying to figure out where I belong in the Quaker world and feeling that my evangelical background is very important. And feeling like the un-programmed tradition is really important. So, trying to find where the balance is there. 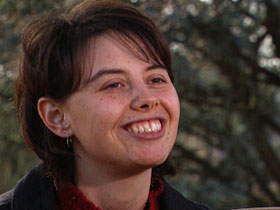 DAVIS: Carol Joy doesn't describe herself as a missionary, but many evangelical Quakers have taken the gospel, and the programmed tradition, around the world. By some estimates there are now more Quakers in Kenya than in the United States.

While Evangelicals are growing, the number of liberal and un-programmed Quakers has grown little over the last century. Some liberal friends say they need to get the word out about who they are and what they do.

RICKERMAN: People have very, very inadequate understanding of what Quakers are. A major problem is being definitive about what we do believe, rather than playing it down.

DAVIS: Today, Quakers are justly famous for their peacemaking and their ability to bring others together. The irony is that they themselves have splintered into many different groups Ð Evangelicals, Conservatives, and Liberals among them.

At Earlham College, Douglas Bennett is looking for a solution.

BENNETT: Earlham, I think, is called to be a crossroads in Quakerism. We draw young people, we draw faculty, who come from all different varieties of Friends. And that's very important.

DAVIS: Bennett hopes to find more young Quakers like Carol Joy Berndlinger who are willing to look across a big theological and cultural divide.

BERNDLINGER: What I'm trying to do now is to figure out how to take some of that back to my own tradition, programmed Quakerism. How to try define more of what Quakerism is about, for myself, and for others.

DAVIS: Over the past 350 years, Quaker identity has been forged through Friends' schools, humanitarian organizations, and meeting houses. If and how that identity changes in the future will largely be determined by Carol Joy and other young Quakers. Whatever happens, Quakers have already had an influence around the world far greater than their numbers alone would have predicted.

This is Deryl Davis reporting.

In the past century, Quakers have helped start nearly 200 social service, environmental, and relief agencies such as the American Friends Service Committee. Additionally, they are the only religious organization to win the Nobel Peace Prize. In spite of its many achievements, almost 350 years after its founding, the Religious Society of Friends — as Quakers are formally known — remains small in numbers.