DERYL DAVIS: Paryushana Parva is a festival of fasting, friendship, and forgiveness. Members of the Jain faith are celebrating the holiest time of the year. It coincides with monsoon season in India, which is where Jainism began.

Dr. SUSHIL JAIN: Each rain season brings about the development and the new life. With new life comes the opportunity for us, the existing life, an opportunity to rejuvenate ourselves. 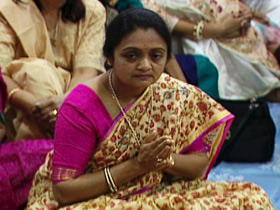 DAVIS: In the festival's most colorful ritual, the Jains tell the story of the conception of Lord Mahavir, a prince born 2,600 years ago, who Jains say founded their religion. Their Holy Scripture says Mahavir's mother had 14 auspicious dreams when she conceived him.

JAIN: Each one of these dreams signifies the qualities or characters this spiritual leader will have, and influence on the disciples.

DAVIS: Those dreams are the center of this ceremony, represented as silver figures, which are paraded, one by one, through the congregation and up to the altar. They symbolize strength, courage, wisdom, and other virtues.

The opportunity to carry the dream symbols is an honor that families win by pledging money in a type of auction.

JAIN: As we prepare for a dream, for the next sequence or dream to be brought up, we'll actually have people announcing their pledges. And the person in the front is actually who sees who is making what sort of a pledge. This is our way of contributing to the community whether we do it once a year or a little at a time. Hopefully, we can get maybe 50% of our operating budget pledged.

DAVIS: The auction and presentation of dreams also help Jains bring the story of Lord Mahavir to the next generation. 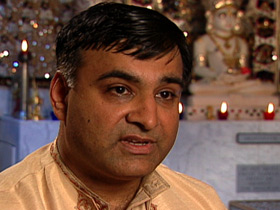 JAIN: It is very difficult for our children living in the North America to be able to relate to the dreams and the qualities unless we offer an opportunity like this to bring them in together as a family.

DAVIS: Toward the end of the ceremony, a silver coconut is placed in a swing. It represents the placement of Lord Mahavir into his mother's womb. Every member of the congregation takes turns rocking the swing -- a symbol of nurturing the new life.

Afterwards, those who aren't fasting partake in a special meal. Jains adhere to the principle of nonviolence, and are strict vegetarians. They also strongly believe in non-attachment to worldly objects and multiplicity -- accepting views other than one's own. During this 18-day festival, they abide by a special diet, which includes no green vegetables and no roots, such as carrots or garlic. Some observe a complete fast for the duration of the holiday. For all Jains, the objective is purification in all aspects of their lives.

Paryushana Parva is a festival of fasting, friendship, and forgiveness. Members of the Jain faith are celebrating the holiest time of the year. It coincides with monsoon season in India, which is where Jainism began.