LUCKY SEVERSON: On our calendar this week … the festival of Diwali, a word meaning “row of light.” Hindus, Jains, and Sikhs around the world observe this holiday. For Hindus and Jains, Diwali marks the beginning of the new year. Different religions have their own legends to describe the origins of Diwali. For Hindus, one of the most popular stories is Lord Rama’s homecoming. That was portrayed this year at a colorful celebration of Diwali in Landover, Maryland. A participant, Menaka Kannan, describes it.

MENAKA KANNAN: Diwali is the festival of lights in the Hindu faith. Basically, it symbolizes King Rama’s return to his kingdom after being exiled, and the story goes that his father had banished him from the kingdom and sent him to exile in the forest. On Diwali, we try to reenact the way that Rama came back. So the citizens all danced in the streets, and so the same way we dance on Diwali. 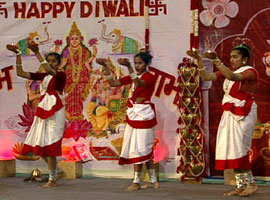 Generally, the more classical dances are devoted toward the gods, and on this occasion probably more toward Rama.

Part of the celebration of Diwali includes a Grand Puja. The puja comes near the end of the Diwali celebration, and it is the biggest part of the entire celebration. All the priests from various different temples, along with the children, go to the stage and begin to do prayers to the Lord.

In the puja, the fire is our medium of communication, basically the way that humans can talk to God. Throughout Hinduism, the fire represents the purification of all things, and it takes away all the sins. As they chant the Lord’s name and the different Vedic chants, they place the flower in front of the fire and, and that is a way of offering to the Lord.

Another very holy part of the puja is the water. It is placed in front of the gods so it becomes sanctified and purified, and also it has a little bit of the water from Ganges River, which is the holiest of all rivers in India. So many people, after the puja, come forward to receive some water and drink it and sprinkle it on their heads to bless themselves.

Also, the illumination, the light that comes from the fire, is a way of taking away the ignorance that we have. So after the puja is done, people take the fire, they rub their hands over the fire and bring it over their head, basically to illuminate themselves and to take away their ignorance.

Every year we celebrate in the same way, just like King Rama is coming back every year.