FRED DE SAM LAZARO, correspondent: It may look like an unusual petting zoo but this is actually a place of reverence to many people in India.

This gowshala, or cow shelter, is one of three in India's capital, Delhi. It serves as both barn and sanctuary for six thousand urban cows. Most are abandoned by their owners to fend for themselves in a mega city of 17 million. 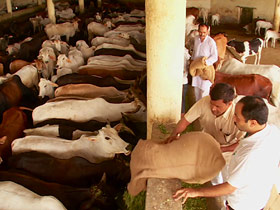 BALJIT SINGH DAGAR (Shelter Board Chair): (through translator) In the Hindu religion, if you take care of cows, your family will prosper and you will have peace. Your children will have a good spiritual life. God will look after them.

DE SAM LAZARO: Cows are considered sacred in Hinduism. They're the favorite animal of the deity Lord Krishna, and a symbol of wealth, strength and abundance. The cow's spiritual significance is likely also tied to it's very practical role in India since ancient times.

MADAN MOHAN VERMA (India Interfaith Foundation): Much of the traditions and rituals have grown out of utility. Although we are not aware of the scientific background of these matters or the correct mythology of certain traditions, but the truth of the matter is every ritual, every rite, every tradition had a strong scientific basis. It was based on moral law, natural law, cosmic law, divine law, moral traditions. 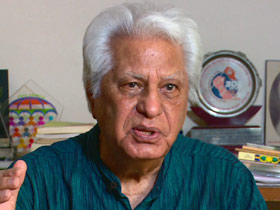 DE SAM LAZARO: Verma says the veneration of cows quite likely traces back millennia and to its utility—on farms, for transportation. Cow's milk, butter, and yogurt are important sources of protein in a vegetarian diet, by which many Hindus abide. In rural areas, cow dung is used for fuel and even the urine is collected for use in traditional medicines.

The slaughter of cows is illegal in many parts of India and even McDonald's, the world’s largest hamburger chain, doesn't serve any beef in its India outlets.

But McDonald's is part of India's growing urban landscape. Delhi is a city that's grown farther and father out into what was once rural land.

BALJIT SINGH DAGAR: (through translator) When they were on farms, these animals used to work, they pulled carts and plows. Now machines have come in and there’s much less use for them. Now people don’t have that much space for cows.

DE SAM LAZARO: An estimated 40,000 of the animals roam freely on the streets of Delhi. They are increasingly seen as a nuisance, clogging traffic and foraging through garbage heaps. And they've become a target for poachers. 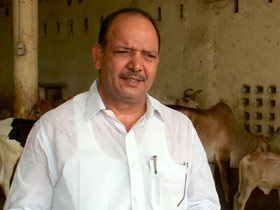 BALJIT SINGH DAGAR: (through translator) We live with people of another religion. Some people of that religion, and I do say some, because there are people in that religion that also honor and serve cows. But some people pick them up from the road...

DE SAM LAZARO: He was referring to "some people" among India's Muslims. Muslims do consume beef, but sociologists say there's growing beef consumption among Hindus as well in an increasingly globalized urban India. A single cow can fetch as much as 5,000 rupees, about 90 dollars, on the underground market, a big payday here. The cow shelters rely on the faithful to get to the animals first.

BALJIT SINGH DAGAR: (through translator) People call in to tell us there is a cow on the street or wandered into our home. We provide transportation to bring them in. Some people bring them in themselves and leave them here.

DE SAM LAZARO: The shelters are supported by public donations, which flowed in abundantly the day we visited from people who came in to pray and to feed the animals. 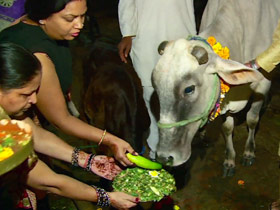 BALJIT SINGH DAGAR: (through translator) We don’t ask people to give money, as you saw today they just come in. When you add together all the money from those who give, all the way from 100 thousand rupees, to thousands, to small amounts, we get about 30 million rupees a year.

DE SAM LAZARO: That's about half a million dollars to allow the animals to live out their natural lives in peace.

BALJIT SINGH DAGAR: (through translator) Cows have to die, but we don’t want them to die of hunger or thirst.

DE SAM LAZARO: It's a far cry from the grassy rural range that is the more natural habitat. But these animals do have cooling fans and an abundant, if somewhat unusually varied diet, as throngs of devout people preserve or restore the historical reverence for India's urban cow.

For Religion & Ethics NewsWeekly, this is Fred de Sam Lazaro in Delhi, India.

Cows are considered sacred by Hindus in India. They were the favorite animal of Lord Krishna, and they serve as a symbol of wealth, strength, and abundance. But people who want to protect these creatures must also deal with those who think cows are little more than a nuisance.