BOB ABERNETHY, anchor: The relationship between science and religion is one of the top interests of the John Templeton Foundation, which has just announced the winner of this year’s Templeton Prize of nearly a million dollars.

He is Dr. John Polkinghorne, an Anglican priest who for many years was a distinguished mathematical physicist at Cambridge University in England. Then he switched careers in mid-life and was ordained. He has written extensively on science and religion.

ABERNETHY: Science is so powerful some people assume that sooner or later the study of the material world will explain everything else, including the truths of religion. How do you respond to that? 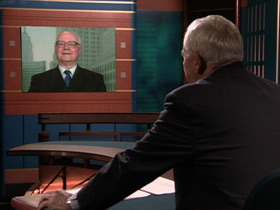 Dr. POLKINGHORNE: Well, I don’t think that’s correct. I think science is successful because it only asks certain types of questions — how things happen. So there are only types of experiences, essentially impersonal experiences. We even put things to the experimental test.

ABERNETHY: You have said you have no problem accepting such ideas as the Big Bang and evolution. But let me ask you about some other things. We just had a story here about research on the brain. Do you think science will someday explain spiritual experience and prayer?

ABERNETHY: Since September 11th, many Americans have sought explanations for pain and suffering and evil. As a scientist and as a Christian, how do you explain those things? 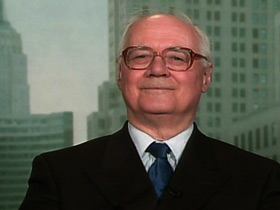 Dr. POLKINGHORNE: Well, of course there are great perplexities about the evil and suffering in the world. But I think it helps us to realize that God has brought into being a creation to which God has given the gift of freedom. The world is not God’s puppet theater in which God makes everything happen. Creatures are free to be themselves, to make themselves, and to make their own decisions. So that means that things will happen that are contrary to God’s will. I don’t think that God wills either the act of a murderer or the incidence of a cancer, but God will allow both to happen in a world over which He doesn’t keep tight and strict control.

ABERNETHY: Dr. Polkinghorne, what are you going to do with nearly a million dollars?

Dr. POLKINGHORNE: Well, I hope to use it to support further work in science and religion. It’s a flourishing area at the moment, and there are very talented young people coming to work in the area. Many are doing Ph.Ds., and I’d like to provide them with some support for post-doctoral work because that’s when, I think, really fruitful things happen. That would take place in Cambridge, which is a good center for doing these things.


(with summary comments by him):