BOB ABERNETHY, anchor: A busy religious calendar this coming week, beginning Wednesday night with the eight-day Jewish festival of Passover. Families gather then for the first of two seders, the special meal at which Jews read the Haggadah. That’s the story of the Jewish redemption from slavery in Egypt. The earliest known written Haggadah dates from the mid-10th or 11th century. Today there are more than 5,000 Haggadahs. We spoke with David Wachtel of the Jewish Theological Seminary in New York about the significance of Haggadahs through the centuries. 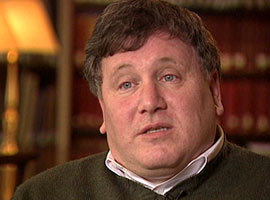 DAVID WACHTEL (Jewish Theological Seminary): It’s the quintessential tale of the Jewish people, it’s their foundation document; it’s how Jews know they’re Jews, even those who don’t believe it happened. In countries where Jews were not permitted to practice their religion, [they] risked death by baking matzot, having Haggadot, and participating in Passover rituals.

The freedom that is so important in the Passover story, in the Haggadah, is something that doesn’t belong to a specific time period 3,000 years ago. It doesn’t belong to any individual people, it is something that is new. There’s a fresh message available to be garnered from the Passover story no matter when or who is looking at it. I think it is that freshness that makes it so appealing.

Those Haggadot that are illustrated, typically in the Middle Ages and the early modern period, always when they show people, always show them in contemporary dress. In the 13th century, the characters are wearing 13th-century dress. In the 17th- and 18th-century Haggadot, Pharoah is wearing a waistcoat. It really points out that these are not characters from eons ago, this is really the fulfillment of, let each person see himself or herself in each generation as if they themselves went out of Egypt. 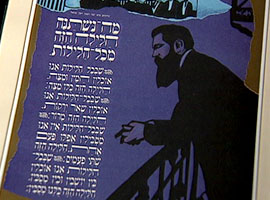 There are feminist Haggadot, there are atheist Haggadot, Haggadot that actually take God out of the equation but still treat this as an important piece of the formulation of the Jewish people. And of course, many, many children’s Haggadot.

We do have a number of Haggadot involving World War II in a number of interesting ways. First there are the soldiers’ Haggadot, from the various numbers of the Allied forces who celebrated Passover during the time when they knew their people were being slaughtered. Immediately following the war, we have a Haggadah that was issued for a seder that took place in Munich in 1946. The people who are partaking in the seder are the remnant of a destroyed, or a largely destroyed, people; that’s known as the “Survivors’ Haggadah.”

At the very end of the Haggadah the message that is repeated every year at every seder table around the world is “Next year in Jerusalem.” It is that message of hope for the coming year that you leave the seder table with, even though you said it every year for your entire life, you always have that hope that this year is the year.