BOB ABERNETHY, anchor: Now, an Easter story of faith and hope. Mattie Stepanek is the brilliant, wheelchair-bound Maryland boy with muscular dystrophy who has become a best-selling inspirational poet. Both he and his mother, Jeni Stepanek, suffer from rare but different forms of the disease. Exactly one year ago, Mattie almost died. But — strongly supported by his mother, who is also in a wheelchair — Mattie outlived all expectations and, not yet a teenager, he has become an amazingly mature public speaker and authority on life at the edge of death. Deryl Davis reports. 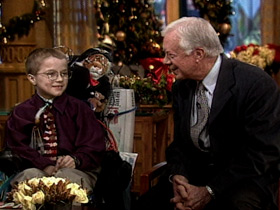 MATTIE STEPANEK: Thank you all for coming out tonight to hear me talk and to have me sign your books.

DERYL DAVIS: Afflicted by a rare and life-threatening form of muscular dystrophy, Mattie spends most of his days in a wheelchair, breathing with the help of a ventilator. But with two books of poetry on the New York Times best-seller list, he does get around.

He’s read poetry for Paula Zahn, talked peacemaking with former President Jimmy Carter, and hobnobbed with First Lady Laura Bush. He’s received awards for his poetry and his message, which is about faith and hope.

MATTIE: God gives me hope that there is something greater than us, something better and bigger than the here and now, that can help us live.

MATTIE: I feel that God has given me a very special opportunity that I should not let go to waste. I use the gift he has given me.

DAVIS: That gift, of words, has struck a chord with children and adults around the country.

MATTIE: I want to read a poem about hope. “I need a new hope, a hope that reaches for the stars and does not end in violence or war. A hope that finds cures for diseases.” 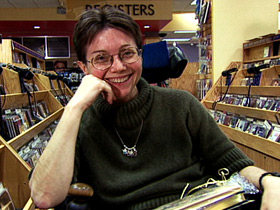 DAVIS: At book signings, Mattie talks about his struggle with disease, his desire to be a peacemaker, and his heroes — one of whom is usually seated behind him.

MATTIE: Another big influence who deserves a round of applause is my mom. She keeps my spirit up.

DAVIS: Jeni Stepanek, a divorcee, has already lost three children to Mattie’s disease, which attacks the respiratory system. The oldest child, whom Mattie knew, lived to be four. Jeni watched one of them struggle for two years.

DAVIS: Jeni learned that she was the carrier of the disease only after being diagnosed with it herself. Her children’s deaths precipitated a spiritual crisis.

JENI: I was in so much pain that I couldn’t even turn to God. I did not feel God in my life. I felt nothingness. I felt despair. No hope. And I just could not understand why this was happening to me, why, again and again.

DAVIS: Today, Jeni says the question is different: not why tragedy happens, but how to go on living with it. A lifelong Roman Catholic, she says the rituals of the Church helped her cope with the loss of her children. 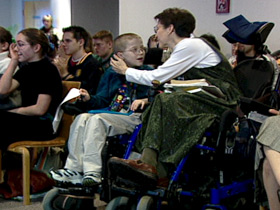 JENI: The fact that I was in the tradition and going to church, and saying the prayers, and doing what I needed to do slowly, as you move further and further away from the wound — the severing of your children from your life — as it begins to heal and scar over. You’re doing these traditional things and you begin to feel the spirituality.

DAVIS: Last Easter, Jeni faced another crisis, as her last child, Mattie, slid into a coma. She thought of praying for a miracle, but decided that wasn’t the right thing to do.

JENI: I really believe in miracles in everyday life. But I also believe that God cannot come down and answer every single prayer in the way that we pray it, because then we don’t have free will.

DAVIS: Instead, Jeni asked God to save Mattie if there was a special plan for his life.

JENI: I prayed, “If there is something that Mattie has, some gift that he has to share with the world, please, please let him live long enough and have the opportunities to do whatever he came here for.”

DAVIS: To his doctors’ surprise, Mattie recovered. His poetry, which he had been writing since age three, was published for the first time and hit the best-seller lists. But Mattie still faces a serious medical situation.

DAVIS: As for Mattie, he’s learned from his mother not to ask for miracles or to indulge in self-pity.

DAVIS: Mattie says he’s already had glimpses of heaven. He says he’s seen angels and imagines becoming one himself someday. But he’s under no illusions about what such talk means. 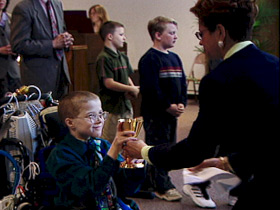 DAVIS: Mattie and Jeni find comfort and community in their local parish church. She sings in the choir and he often leads a children’s Bible class. While Catholicism is important to them, Jeni says experience has taught her there’s a big difference between religion and spirituality.

JENI: If you embrace something that brings you closer to the spirituality and that one being that you might call God, or Yahweh, or Abba, or Buddha, or Allah — I mean, it doesn’t matter what you call that being so long as you are trying to get to a better place. There are different ways to do that.

MATTIE: It doesn’t matter how you pray. Just pray. All religions are beautiful and they all have one common belief. There’s something bigger and greater than us that can give us and take from us life. It is better than the here and now.

DAVIS: Mattie and Jeni intend to keep spreading that message of hope to others. And although the future may bring new trials, Jeni says they’ll continue to live each day to the fullest.

JENI: You pray for good things to happen. You pray for strength. You pray to understand and to make sense of things. And I try to pray that the best possible outcome happens.

ABERNETHY: Unless there is some dramatic cure, Mattie Stepanek is expected to live from a few more months to a few years.