JUDY VALENTE, correspondent: Poet Christian Wiman is in a place where he says his spirit is at home: the chapel at The Yale Divinity School.

CHRISTIAN WIMAN: There’s so much genuine joy and intensity in those services. You think of young people as being ironic and dejected and you know, dispassionate or dissolute maybe. And here are a bunch of people in their twenties that are filled with joy, they’re singing out, it is truly inspiring.

VALENTE: Wiman is here to offer a message to aspiring ministers and church musicians, that poetry is not only a means of reaching out to God, but one of the ways through which God reaches out to us.

WIMAN: This is true in a profound sense, in the way that art radically expands or extends our notion of God. We’ve all had the experience of coming across a work of art that suddenly blows your mind and makes you think of everything differently, think of the world differently, think of God differently. It’s actually an absolutely essential element of any authentic and unified religious experience, I think. 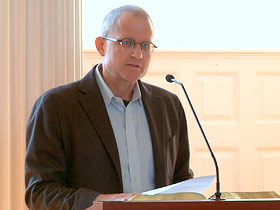 VALENTE: Wiman’s arrival at Yale’s Institute of Sacred Music as a senior lecturer in religion and literature comes at the end of a long personal pilgrimage. One that included years of spiritual unrest and wandering, and led ultimately to an encounter with what he calls "the God of Job, the God of annihilation." It is a journey that began here, amid the arid plains and long horizons of west Texas.

WIMAN: I was raised in an atmosphere that was really completely saturated with religion. It was Southern Baptist, fundamentalist Baptist. The Bible was inerrant, as we said. And I never really met a person who wasn’t a believer until I left that place.

WIMAN: She was able to be in the world in a way that was completely incarnational almost. There was no separation between her existence and this self-consciousness that I always feel afflicted with, separating me from my experience. She really inhabited the life that she had. And I think you could argue that that’s what being with God is, being able to fully inhabit the moments that we are given. 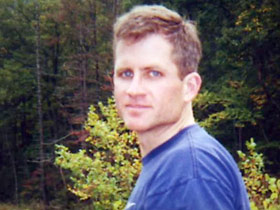 VALENTE: Wiman left Texas to travel the world, aspiring to be a poet. He also left behind his Baptist upbringing but not what he calls an insistent, "clandestine" religious yearning.

WIMAN: I wouldn’t have called myself a Christian for years and years, but clearly it was a passion. It wasn’t exactly dormant.

VALENTE: He would go on to publish two collections of poetry and win a major award for younger poets. At age 36, he was named editor of the prestigious Poetry magazine in Chicago, just after the magazine was awarded a $150 million bequest by pharmaceutical heiress Ruth Lilly. He fell in love and married.

WIMAN: Falling in love with my wife, meeting my wife really shook my world up in ways I couldn’t have predicted. I had not been able to write for a long time and I began to write after that. She and I began to say prayers after we got together and we also began to talk about going to church. We didn’t actually make it in the door, but we talked about it. 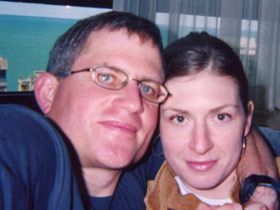 VALENTE: Then, at the age of 39, just one year into his marriage, Wiman was diagnosed with a rare and incurable blood cancer.

WIMAN: I have cursed mightily and I have been furious and have cursed God just like any Old Testament prophet. It didn’t ever destroy me, it didn’t ever make me bitter toward the people that I love. But gosh, it’s been hard.

I would say the illness made me need to formalize faith, need to find some form for it. It wasn’t necessarily that I felt like I needed to be surrounded by people who were going to help us. I think that’s part of it. It was more simply a sense of solidarity and suffering and a sense of solidarity and worship. I have a hard time conceiving of a God who is completely removed from suffering. Once I understand the notion of Christ participating in suffering, then it makes more sense to me.

VALENTE: While Wiman found comfort in worshiping with others, he found the ways churches talk about God, faith, suffering and death to be woefully inadequate.

Christian Wiman says people today are seeking a new language for speaking about God. It is a language that goes beyond words, concepts or even doctrine, that taps into a genuine experience of the divine, what he calls “glimmers of God.” 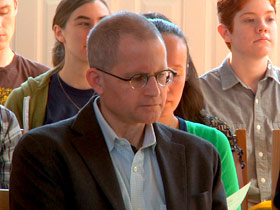 WIMAN: If you ask me, do I get glimpses of God, yes, I get these glimmerings of intuitions, stronger than that really, where the existence of God seems to me absolute. We all go through our lives and then suddenly we'll have a moment when we think, I have faith right now in something. I find that I’ve had these moments in my life when I have been overcome by what I only know to call God.

(Reading in Chapel) Think of the atoms inside the stone. / Think of the man who sits alone / trying to will himself into the stillness where / God goes belonging...

In my experience, the artists that I know, even though they wouldn’t call themselves Christians — some would — but they are the ones who are fighting to remake some kind of language to connect us with the ineffable, with the divine.

If we think that metaphor is how we talk of God, and that seems to me very hard to dispute that there’s any other way of talking to God, talking about God, other than metaphorically, then it would follow that the place where metaphor is most powerfully used, most compressed, most concise, most explosive in poetry would be where we would go to find religious enlightenment. 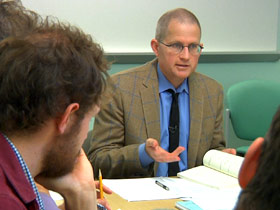 VALENTE: He cites as an example a poem that he teaches in his class by the Polish poet Anna Kamienska.

WIMAN: Lord let me suffer much / And then die / Let me walk through silence / And leave nothing behind, not even fear / Make the world continue / Let the ocean kiss the sand just as before / Let the grass stay green / So that frogs can hide in it / So that someone can bury his face in it / And sob out his love / Make the day rise brightly / As if there were no more pain / And let my poem stand clear as a windowpane / Bumped by a bumblebee’s head

It’s a hard poem to pray, "Lord, let me suffer, let me die, Lord, let nothing be changed after my death." 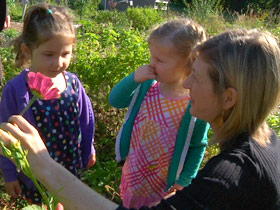 VALENTE: Wiman is now 46, and the father of twin daughters. His doctors tell him his cancer is “under control.” But his prognosis is highly uncertain. He has endured painful marrow transplants and in the course of many long hospitalizations, confronted death.

WIMAN: I find that I don’t fear death, now for myself. It’s just a great tragedy to think of my family. I also believe that death is here to teach us something and that we are meant not to fill up the content of the afterlife, and that we have to mostly be silent about it.

VALENTE: A poem he often reads in public came to him after a three-year dry spell in his poetry writing. He wrote it in one of the darkest periods of his illness. It is a psalm-like portrayal of a God who appears in stone, atom, shadow and all creation, or as the poet says, "in every riven thing."

“I have a hard time conceiving of a God completely removed from suffering,” says Christian Wiman, a lecturer in religion and literature at the Yale Institute of Sacred Music. “Once I understand the notion of Christ participating in suffering, then it makes more sense to me.”