BOB ABERNETHY, anchor: On our calendar: Hanukkah, which begins next Friday night. According to the story, in the second century B.C., Jews recaptured their temple in Jerusalem. They relit the lamps with only a one-day supply of oil. But the candles burned for eight days—hence, the eight days of Hanukkah. We visited the Jewish Museum in New York, where children joined in a Hanukkah sing-along.

SUSAN BRAUNSTEIN (Curator of Archaeology and Judaica, Jewish Museum of New York): The central ritual of the holiday of Hanukkah is the lighting of the lights. That is our commandment, to light these lights. 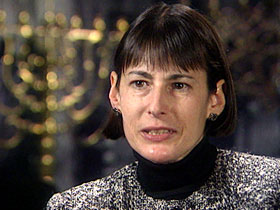 There is a tradition in Judaism that if you are going to perform the commandments, you should do it in the most beautiful way possible. Hanukkah lamps actually are a wonderful representation of the Jewish experience over time, through the centuries.

They represent a basic tradition fulfilling a commandment to light eight lights, so they must have eight lights. But the way they’re formed, the materials that they’re made from, and the designs that we find on them are really taken from the countries in which Jews lived. Jews wanted to continue to observe their religion despite the fact that they were scattered in the four corners of the earth.

A lamp from Iraq has the hamsa on it. That is the hand of Fatima, which is believed to be a protective device. So it’s very interesting that in this Islamic country where Jews were living, they incorporated the hamsa in their lamp.

Judaism has probably survived because it also has built into it the ability to interpret the tradition and to adapt the tradition for each time and place that Jews find themselves. And Hanukkah is certainly a joyous occasion. It is a celebration of a victory, of a miracle.

UNIDENTIFIED SINGER: Oh, a great miracle happened there! That was great, everybody! Give yourselves a hand for that!