BOB ABERNETHY, anchor: This weekend, the new Star Trek movie, Nemesis, opens in theaters across the country, featuring the cast of Star Trek: The Next Generation. The film raises issues of good and evil—also key themes of the original Star Trek television series more than 30 years ago. One of the stars of that series, Leonard Nimoy, is still exploring those themes...now through art photography. He has a highly controversial new book focusing on the presence of God. Kim Lawton visited Nimoy in his Upper West Side home in New York, where they talked about spirituality and his work.

KIM LAWTON: For three television seasons and six feature-length films, the original Star Trek crew was on a mission to boldly go where no man had gone before.

Now Mr. Spock, actor Leonard Nimoy, says he's on a new voyage—a spiritual exploration of the presence of God. His controversial new book of photographs, called Shekhina, is part of that journey. 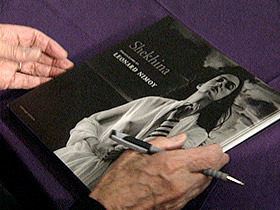 LEONARD NIMOY: My photographs are an interpretation; they're an essay, an exploration. I was looking for a way to express some of the feelings that I had visually, to create some kind of poetic imagery around the idea.

LAWTON: Hebrew scriptures use the word "Shekhina" to describe the radiant presence of God—God's closeness to human beings. In the Jewish mystical tradition of Kabbalah, the Shekhina took on a feminine form. The 71-year-old actor and director says he has been deeply influenced by that interpretation of Shekhina.

Mr. NIMOY: It means a divinity. A feminine aspect of the divinity. It's not pluralism, we are still talking monotheism. But she is an aspect of God. I decided that I was going to make her a woman, or I wasn't going to do it at all.

LAWTON: Nimoy's exploration resulted in a series of black-and-white photos of nude and seminude women as his representations of the Shekhina.

Mr. NIMOY: This image is, I think, probably the one that most speaks to the idea of women taking a prominent role in the religious process. The cover image probably goes right, most to the heart of the issue of placing women in the hierarchy of the religion in a very prominent way.

LAWTON: Many of the women are wearing sacred religious objects, prayer shawls and phylacteries, and nothing else. That has provoked controversy in the Jewish community. 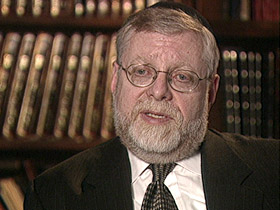 Rabbi STEVEN DWORKEN (Rabbinical Council of America): Appearing nude or in a state of scant dress while wearing these objects really desecrates the objects, so to speak, and desecrates the whole concept of bringing one closer to God.

LAWTON: Rabbi Steven Dworken was among those offended. He organized an e-mail campaign urging Orthodox rabbis to protest Jewish promotion of the book.

Rabbi DWORKEN: I felt that it is inappropriate for Jewish organizations, Jewish centers, synagogues, temples to display such literature, which, if you will, mocks our faith or our faith objects.

LAWTON: As a result of the controversy, Nimoy appearances at Jewish centers in Seattle and Detroit were canceled.

(to Mr. Nimoy): Have you been bothered that some people call your work sacrilegious?

Mr. NIMOY: I'm somewhere between bothered and saddened by it. I see these pictures as reverential.

LAWTON: In his book, Nimoy says he tried to convey that reverence. He read one passage at an appearance he did make, last month, at a book fair at the Jewish Community Center in Rockville, Maryland. 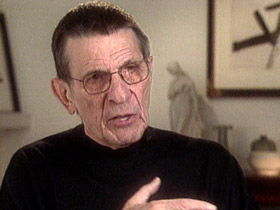 Mr. NIMOY (reading from his book): My Shekhina is a woman, a creature of spiritual glory in the flesh. I search for her with my camera. I wonder where she spends her quiet and private time. What I find is sensuous and seductive, drawing me closer.

(to Lawton): There's the old legend of a juggler who goes to worship and sits down in front of the altar and juggles because that's what he has to offer. That's his art. I have this means of expression and I'm using it. If there were some other avenues to express it, I would. If I were a painter I'd probably paint about it. I happen to be a photographer.

LAWTON: Nimoy says his study and work around Shekhina have rekindled his faith.

Mr. NIMOY: What it means to me on a deeper personal level is a spiritual path, a spiritual approach to my Judaism, which had gone kind of flat until this came along, frankly. When I now go to services I bring something of myself that is different and fresh to the experience. I experience something that's in touch with something other than myself.

LAWTON: It has also enabled him to see spiritual connections to his work on the Star Trek series.

(to Mr. Nimoy): Tell me about the connection between your Jewish background and the Vulcan greeting (makes hand gesture). 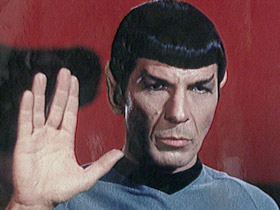 Mr. NIMOY: You do that very well!

Mr. NIMOY: There is a direct connection. The day that we were filming the scene, in one of the episodes we're on Spock's home planet Vulcan for the first time, we were interacting with another Vulcan for the first time, we've never seen any other Vulcans. I suggested that we have something special that Vulcans do when they greet. And the director said, "What would you like to do?" And I said, "This." (shows hands)

LAWTON: The gesture came to him, Nimoy says, from his childhood memories of the priestly blessing said at Orthodox Jewish services he attended with his family.

LAWTON: The director loved the gesture, and it forever became part of Mr. Spock.

Mr. NIMOY: It's part of the culture now. People on the street wave at me this way as I go by.

LAWTON: Nimoy only recently learned from a rabbi that the gesture is the shape of the Hebrew letter shin, the first letter in the word "Shaddai," the name of God Almighty. It's also the first letter of the word "Shekina." He began to see a spiritual—almost mystical—thread running through his life and his work.

Mr. NIMOY: So that's why I began to make all these connections, this (hand gesture), and I was working on a photography project with the female figure, and I began to introduce the letter shin, that shape, into some of the photographs, and the work grew from that.

LAWTON: Nimoy says he's not sure how far this voyage may take him, but he's willing to press on.

Mr. NIMOY: I think I'm still on the journey. I haven't learned all [of] what I would like to know about the subject matter; I still have some work to do, some exploring to do. I don't know whether it will continue to express itself artistically or simply be a growing part of my own spiritual life. I can't tell at the moment.

LAWTON: And despite the controversy, he hopes others may also benefit spiritually from his explorations. I'm Kim Lawton reporting.

Leonard Nimoy, the actor who played Spock in the original Star Trek television series, has a controversial new book called Shekhina, a photographic exploration of the presence of God. He says he was deeply influenced by the Jewish mystical tradition of Kabbalah where the Shekhina, or the presence of God, took on a feminine form.