KIM LAWTON, correspondent: It’s 6 a.m. in scenic Falls Village, Connecticut, and mist is still rising off the lake. For these Jewish farmers at the Isabella Freedman Retreat Center, it’s time for the Morning Prayer service—Avodat Lev, the service of the heart. This morning there is a special guest: Nigel Savage, founder and president of the Jewish environmental group Hazon.

LAWTON: The word hazon means “vision,” and Savage’s vision is to apply the values of his faith to caring for the earth, through direct experience and through activism. 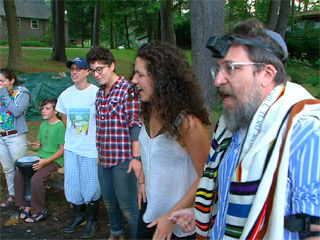 LAWTON: Hazon sponsors several environmental awareness campaigns and educational activities, including Adamah, a three-month organic farming fellowship here in Connecticut for 20-somethings. Adamah means “earth” in Hebrew. It’s a word used in the Genesis creation story. Adam was made from adamah. Shamu Sadeh directs the program. He says they cultivate both the soil and the soul here. Initially, many people didn’t take Adamah seriously.

SHAMU SADEH (Director, Adamah): It was a novelty. People thought it was funny, and they would make all types of jokes: a Jewish person in the woods, a Jewish farmer—ha ha.

LAWTON: But Sadeh says now, more and more Jews are becoming concerned about food and sustainability. Adamah runs a community-supported agriculture project which delivers organic crops to local families and food banks. They also sell vegetables at markets, as well as their jams, goat’s milk cheese, and their popular pickles.

(to Arthur Siller) What makes your pickles more special than the ones I buy at the supermarket?

ARTHUR SILLER: I think our pickles are really very high quality. A lot of people really like our pickles because of what they support. 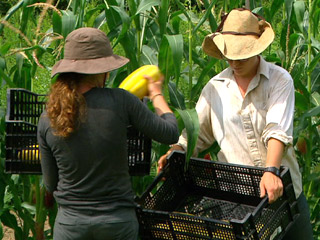 LAWTON: Many of the fellows were drawn by the idea of learning more about nature and farming. Molly Zimmerman came as a fellow and stayed. She’s now a field apprentice.

MOLLY ZIMMERMAN: It’s honest work. We don’t spray pesticides. We plant beneficial flowers so that beneficial insects can come and eat the pests that are eating our tomatoes. It does feel like a moral thing for me and just a more honest way of farming.

RACHEL FELSON: I never imagined myself milking goats, but I love it. It’s my favorite thing here.

LAWTON: Many of these millennials were also drawn by the idea of having an intentionally Jewish experience.

FELSON: I wouldn’t necessarily consider myself super-religious, but more culturally Jewish, and I’ve been looking for a way to reconnect with that part of myself and Jewish community, and this is where it’s at. I definitely found it here.

LAWTON: Organizers say that before coming here, many participants have been disengaged from Jewish institutions. But being here, spending time in nature helps reconnect them to their faith. 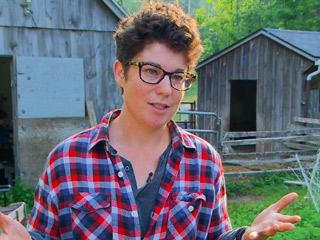 MEREDITH COHEN: The spiritual experiences that I share with people happen just as much in the field when I’m working or when I'm milking goats as they do in a service. There’s just a lot of room for joy and gratitude and excitement. You are holding a seed in your hand that you know in however many months will grow into an onion, and it’s just like a miracle. It’s unbelievable.

LAWTON: Sadeh says at Adamah they try to tie that nature-based spirituality directly to Jewish tradition.

SADEH: One of the primary Jewish teachings that I relate to and also teach is a sense of wonder or a sense of awe. Everything that follows, all the laws and all the rituals and all the language, is just a response to that basic human experience of "wow."

ZIMMERMAN: Judaism is very deeply rooted in agriculture, and I didn’t know that before, and being able to learn that and learn things from the Torah that are related to the things that I do day to day is just mind-blowing to me.

SAVAGE: We entered human history as an indigenous people and that’s what the Torah is a record of: life, language, life cycle, climate, food. 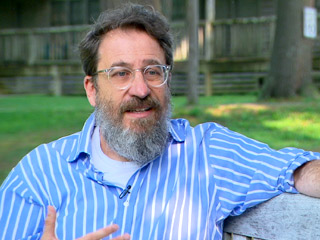 LAWTON: As an example, Savage cites the concept of being kosher, asking is this fit or right to eat?

SAVAGE: For 2,000 years Jewish people have been asking that question in the frame of was it from a pig or a cow, and how was this animal killed. In the 21st century that question, is this fit for me to eat?—that’s an important question for everybody alive today, because the ramifications of our food choices play out on other people’s lives and on animals and on land and on the climate.

LAWTON: Sadeh says from the very beginning, in the Garden of Eden, humans have felt the tension of living on earth when God told Adam and Eve to both work the garden and tend it.

SADEH: We need to change the world around us to make food and warm our homes in the winter, move ourselves around on the one hand, and on the other hand that there needs to be a fundamental underlying note of protecting it.

LAWTON: Hazon and Adamah urge individuals to examine how their actions can play a role in making the planet more sustainable for the future. 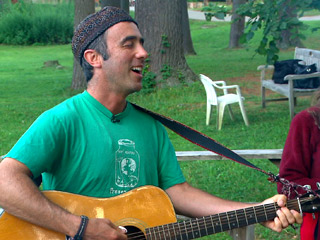 COHEN: Words like “sustainability” out in the world have become very abstract. Sometimes I think people use it to mean less bad, but actually what sustainable means is it’s a cycle that could keep going forever, and here that’s not an abstract idea. It’s a very, very direct thing.

FELSON: I recognize that it’s only one person doing one small part. But if you add all those people together, and then all of us telling our communities about the little things we can all do to be more sustainable, I mean, that has to make a difference in the world.

LAWTON: But Savage says there is an advocacy component as well. In July, he and other faith leaders were invited to a climate change meeting in Paris organized by the president of France. There, people of faith were urged to speak out about climate change in advance of a major United Nations meeting on the issue later this fall. 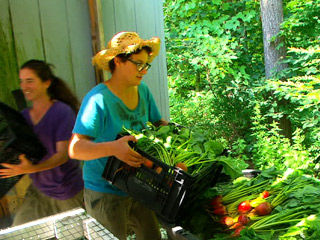 LAWTON: Savage believes Pope Francis has helped reenergize Jewish environmentalism. He says climate change will be a key topic in many synagogues during the High Holidays, which fall around the pope’s visit to the US.

LAWTON: And with all the warnings about the potentially catastrophic implications of climate change, Savage believes Jews have another contribution to make as well.

SAVAGE: I do think one of the deep lessons of Jewish history is this ability to face tragedy, to face destruction and actually not be bowed by it.

LAWTON: It’s a contribution he believes can help the environmental movement address the looming issues with hope.

The environmental group Hazon (the Hebrew word for “vision”) sponsors a fellowship for young Jews who want to learn about sustainable farming practices while also focusing on spirituality and community life. For the group’s leaders, agriculture and concern for the environment has always been a part of Jewish tradition, and they hope young Jews will play an important role in building a healthier and more sustainable world. R&E went to a community-supported Jewish agriculture project in Falls Village, Connecticut to see how Jewish twenty-somethings are learning “to cultivate the soil and their soul.”

Here are two recipes from Adamah, the three-month organic farming fellowship in Connecticut featured in this story:

Quart jar, crock, or other fermentation vessel
About 1 lb of small crunchy cukes
1 T salt
Warm water and cold water
1 to 3 cloves chopped garlic
1⁄2 to 3⁄4 T pickling spice
1 head fresh flowering dill (or 1 T of any form of dill—fresh or dried leaf, or seeds) any other spices and herbs you want to add (hot peppers, mustard seed, etc.)

1. Pack quart jar with cukes.
2. Mix 1 tablespoon salt into warm water, stir to dissolve, let cool and add to jar.
3. Add chopped garlic, pickling spice and dill.
4. Fill jar to 3⁄4” from top with cold water. Tighten lid and shake to further distribute salt.
5. Make sure cukes are below water level. You can wedge them under the neck of the jar, or you can use a few cuke slices to keep the good cukes below the water.
6. Leave on a tray at proper temperature (62 to 78 degrees) for at least 3 days, with lids medium-tight. After three days “burp” the jars (open them over a sink and let out some pressure).
7. After 5 to 10 days, when you like the flavor, compost the slices from the top (if they are moldy or soft) and transfer the jar to the fridge. (Half sours ferment for just 1 or 2 days. You may want to use a bit less salt, as half sours don’t have the sour flavor to balance out the salty flavor.)

You can make kimchi with salt or with brine. Below is a no-brine recipe. If you want to make it with brine, just follow the salt to veggie ratio for the above pickle recipe and use water.

Ingredients and Supplies (Be Creative)

1. Chop, grate, or slice cabbage and other veggies
2. Sprinkle salt on the prepped produce as you go
3. Let sit for a few hours, or get the natural juices out by “pounding” the veggies to help release the liquid.
4. Pack tightly into a crock or jar and make sure the liquid covers the vegetables.
5. Use a system for weighing down the veggies (you can use a plate and weight method, you can use a baggie full of brine, or you can just use a clean hand every day or so to push it below the brine level).
6. Leave on a tray at proper temperature (62 to 78 degrees) for at least 3 days, with lids medium-tight. After three days “burp” the jars (open them over a sink and let out some pressure).
7. When you like the flavor, transfer the jar to the fridge.
8. If you’ve made a large batch, you can put some in a jar in the fridge and eat it, while the rest continues to ferment on the counter. Refill your fridge jar as necessary and make a new batch before the old one runs out. You’ll really get a sense of how the flavor changes and at what point you like it best.