BOB ABERNETHY, anchor: As the U.S. military buildup continues in the Middle East, debate also continues over the morality of going to war. Today, a special report on the moral arguments, for and against. I spoke with William Galston of the University of Maryland, where he is a professor at the School of Public Affairs and Director of the Institute for Philosophy and Public Policy. Also with George Weigel, a senior fellow at the Ethics and Public Policy Center in Washington. Weigel says modern weapons in the hands of Saddam Hussein threaten necessary order. He also argues that that combination is not just a potential danger but aggression that has already begun.

GEORGE WEIGEL (Senior Fellow, Ethics and Public Policy Center): And it seems to me, when a demonstratedly aggressive regime acquires weapons of mass destruction — not for purposes of deterrence but for purposes of attack — it is legitimate to say, in moral terms, this is an aggression under way to which there is a morally legitimate claim to response. 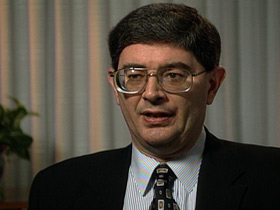 ABERNETHY: How sure are we that Saddam Hussein has weapons that are a threat to us?

ABERNETHY: Professor Galston opposes a preemptive strike on Iraq in part because, he says, it does not meet the historic criteria for a just war.

Professor WILLIAM GALSTON (Director of the Institute for Philosophy and Public Policy): The threat has to be grave. It has to be immediate. It has to be such that the costs of delay are unbearable. In my judgment, the criteria for justifiable preemption have not been met in the case of Iraq.

ABERNETHY: But what about the argument that modern weapons are so dangerous they require a new definition of self-defense?

Prof. GALSTON: It is one thing to say that a country has a weapon. It’s a very different thing to say that the country has the intention of using that weapon against us. So the question becomes, does Saddam Hussein have, or is he likely to have, the intention of using weapons of mass destruction against us? In my judgment, the answer to that is almost certainly no, except if we send him a signal that he is going down, that he has nothing left to lose. That is the one scenario under which he might conceivably unleash weapons of mass destruction against us, if he can. 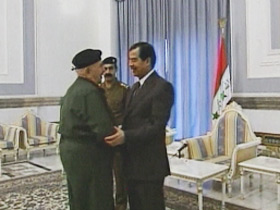 ABERNETHY: Galston argues that deterrence would be a better policy than going to war.

Prof. GALSTON: Whenever we have sent a serious signal to Saddam Hussein that something would be intolerable if he did it, he has not done it. When we have not sent such a signal, he has done it. But that is our mistake. We have every legal and moral right to disarm Saddam Hussein, and the fact that neither we nor the international community acted forcefully enough to enforce that claim during the 1990s is not an argument in favor of preemption, it is an argument in favor of enforcement.

ABERNETHY: And you are convinced that that threat is imminent?

ABERNETHY: Galston says the U.S. must honor international law because America needs the unforced respect of other nations. 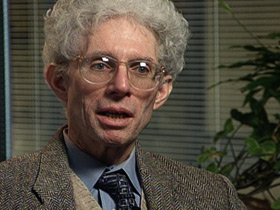 Prof. GALSTON: I think that if we turn in a different direction — whatever our intentions and whatever the truth of the matter — we will be seen as the reincarnation of the Roman empire. Let me be very personal. I am delighted to be a citizen of a constitutional democracy. I do not want to be a citizen of an empire.

ABERNETHY: Galston also argues that other countries with nuclear weapons — such as Pakistan — could think if the U.S. can make a preemptive strike they can, too.

Prof. GALSTON: I am terrified — I use that word advisedly — that if we act on the basis of a doctrine of preemption and if we act alone that other nations, including nuclear-armed nations, will take that as a green light.

ABERNETHY: Weigel thinks that will not happen.

Mr. WEIGEL: It shouldn’t do that. We are talking about a very specific circumstance here. And if the U.S. does take military action against Iraq I believe it will do that with a sufficient degree of support from other nations, and perhaps from the UN itself, to make clear that this is not some kind of cowboy act of a state running around enforcing its own norms on the rest of the world. We should remember that the U.S. is doing this not for itself only. The U.S. is doing this, if it does it, for the sake of world order, for the sake of international law.

ABERNETHY: Weigel and Galston differ sharply over the likely consequences of attacking Iraq. 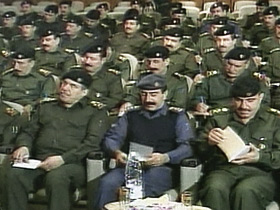 Mr. WEIGEL: My own intuition is that the regime will crumble rather quickly because there is no upside for the Iraqi army, even for his Republican Guard, to resist what they know is the inevitable outcome of this action. It does not seem to me likely that people who have been brutally oppressed for more than 20 years — this in a country in which there is not a single family that has not been touched by the brutality of this regime — are going to fight desperately to save a man they would like to have been rid of 12 years ago.

Prof. GALSTON: Everything depends on the strategy that Saddam Hussein decides to follow to counter our force. There are well-authenticated rumors to the effect that he is not about to fight the way he fought and lost the Gulf War. Instead, his best forces will retreat to Baghdad and its environs and then dare us to come in and conduct hand-to-hand, building-to-building, street-to-street fighting with them. That is the nightmare scenario. It would be very costly not only in U.S. lives and in the lives of the Iraqi armed forces but also particularly [in] Iraqi civilians who would be caught in the crossfire. And all of that would be played out before a world audience through the medium of global television.

ABERNETHY: And, after the fighting, is the U.S. prepared to occupy Iraq for many years?

Mr. WEIGEL: I think the administration has learned from the failure of the predecessor Bush administration in 1991 to see war through to a successful political conclusion. And I think, yes, the will is there, not to hit and run militarily but to stay there and try to facilitate the emergence of an Iraq that is good for the people of Iraq and that is good for the region.

ABERNETHY: Galston says many possible consequences of an attack trouble him.

Prof. GALSTON: The need to occupy Iraq militarily for an extended period after the conquest in circumstances that are a lot less favorable than the comparable occupation of Japan after World War II; creating the conditions for a new wave of terrorism directed against the U.S. and its allies; potentially destabilizing friendly governments throughout the Middle East — and they are terrified of that, as everybody knows; and driving an even deeper wedge between the United States and its erstwhile friends and allies in the world. 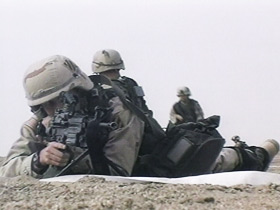 Mr. WEIGEL: It was also said in the fall of 1990 that if we took military action to expel Iraq from Kuwait, the Muslim street, so called, would rise up. None of that happened. I don’t think it’s likely to happen in this case. I think the danger in this case is of terrorist activity, probably here in the U.S., perhaps in Britain and elsewhere. But what’s the alternative? I mean, can we let ourselves be held hostage to these kinds of wicked forces on the chance that they may do something wicked? No, we prepare for that, as we are preparing for action in Iraq.

Prof. GALSTON: I have reached the judgment that, although many people I respect believe that it would do more good than harm, that in fact it would do precisely the reverse. An invasion of Iraq would expose the U.S. not only to physical jeopardy and political jeopardy but also [to] moral jeopardy. We might win a quick victory, but I think in the long run it would be a setback for the U.S. and for the case of global democracy and freedom that we rightly and proudly sponsor.

Mr. WEIGEL: There are moments in history when great powers have great obligations that only they can meet. In fact, if military action takes place in Iraq, the U.S. will not be going it alone. There will be allies. But no one should doubt that America bears a special burden of responsibility for creating the minimum conditions of world order in the world as it is today.

ABERNETHY: Both Weigel and Galston say a U.S. attack is likely. Both also say if Iraq is found to have been hiding its weapons, a military attack is justified.