MICAH HENDLER: Jerusalem is a place where historically if there is something different about us, let’s fight about it. That’s basically the vibe. And so we and the chorus are trying to create an alternate reality.

I saw that if I created a singing group, I could actually create a community. I could empower them, not only as singers, but to see what that kind of voice led to outside of the singing group and the kind of circle of friends that could happen where none had existed before. 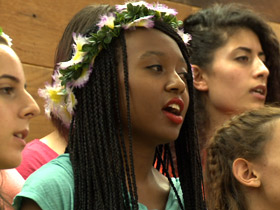 Before just going into the conflict, we start by building an understanding of values. I think the most central value of our dialogue process is that of equality. And we spend actually a good month talking about what is equality?

After joining this choir it changed my life. It made me know what they think. It made them know what I think.

HILI SALZ: The choir made me learn that I can listen to them. I can always like hear what they want to say. I used to always stand for my opinion and everyone stood for their opinion, everyone thought they were always right. And then like, the process, people started to listen. People started to respect the other, which is so important. 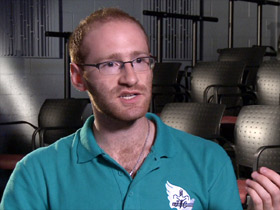 MICAH HENDLER: Everything that we sing has to be on the one hand something that everyone is comfortable singing. So it has to be universal to some degree, but it also needs to mean something. The one song that we sing that has the word peace in it, it's the prayer of St. Francis of Assisi. "Make me an instrument of Thy Peace." But what makes that song so powerful, it’s not just that it’s a gorgeous musical setting, but that the rest of the text essentially says what it means to be an instrument of peace. Peace means spreading love where there is hatred, it means spreading hope where there is despair, it means having faith in times of great crisis.

The most extreme situation that we’ve had over the last three years is obviously the war last summer. Not just what was going on in Gaza, but specifically, what was going on in Jerusalem with violence against teenagers. And that was very, very personal. Both the Israelis who were kidnapped in the West Bank and the Palestinian teen who was murdered in East Jerusalem. Some of the kids in the choir knew them. I had a strong enough structure and a superordinate goal that I could hold the group together structurally. But emotionally they came because they wanted to be there. They came became it was an oasis from all of the insanity and all of the awful physical and emotional violence that was happening around them that this was a place where they really felt at home. 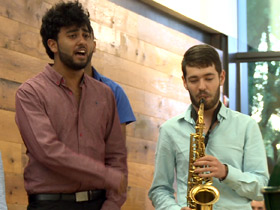 The most amazing musical thing that we’ve done as a group in the three years that we’ve existed as a group is the original composition. Thirty Israeli and Palestinian high school students who do not share a musical language, do not share a verbal language, do not share political beliefs, religious beliefs, come from the same socioeconomic backgrounds, literally should have virtually nothing in common, somehow found a way to write a piece of music together that is very meaningful, that is both personal and group. And musically it’s very, very original and eclectic, and takes everything like hip hop style sampling, to Arabic Mawal, like vocal improvisation, to jazz saxophone to chant, and really everything in between. And it was written by the chorus members themselves collaboratively through a dialogue process.

ZOEY TABAK: I just really learned that arguing is really pointless and it can go on for ages. I think you just really have to focus and put things behind you as people. Let certain things go and just try to work towards a better future.

This Israeli-Palestinian ensemble of high school singers of the Jerusalem International YMCA believes in “transcending conflict through song.” “Jerusalem is a place historically if there is something different about us, let’s fight about it. That’s basically the vibe. And so we and the chorus are trying to create an alternate reality,” says Micah Hendler, who founded the YMCA Jerusalem Youth Chorus.