BOB ABERNETHY, anchor: As the country debates whether to attack Iraq, the views today of one veteran war correspondent who has written a powerful new book about the costs of war—to individuals and to societies.

The title is “War is a Force That Gives Us Meaning,” and the author is Chris Hedges of The New York Times.

We caught up with Hedges alongside the Delaware River, near his home in Lambertville, New Jersey. He told us he is not a pacifist: he thinks some wars are the lesser evil. But he wants Americans to understand how self-destructive war can be.

CHRIS HEDGES (Author and New York Times Correspondent): War is like a poison. And just as a cancer patient must at times ingest a poison to fight off a disease, so there are times in a society when we must ingest the poison of war to survive. But what we must understand is that just as the disease can kill us, so can the poison. War is one of the most heady and intoxicating, addictive enterprises ever created by humankind. And the only way to guard against it is finally to understand that, at its core, war is death.

ABERNETHY: Hedges says he became a war correspondent because he was an idealist attracted to people fighting for justice. As his press credentials attest, he covered wars in El Salvador, Nicaragua, Africa, the Middle East, and the former Yugoslavia. He has been shot at, shelled, bombed, strafed, ambushed, and captured, in Iraq, at the end of the Gulf War. 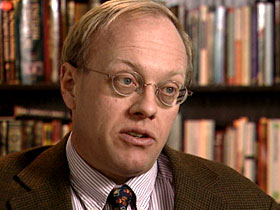 Mr. HEDGES: I think for those who are in combat, it very swiftly can become an addiction. In every conflict that I have covered, you reach a point — and I think I reached this point in,certainly in El Salvador — where you feel that it’s better to live for one intoxicating, empowering moment than ever to go back to that kind of dull routine of daily life. And if your own death is the cost of that, then that’s a cost you are willing to accept.

ABERNETHY: There are pictures of you from some of the wars you covered. You look happy.

Mr. HEDGES: “Happy” is not a word I would use to describe it. But I had a sense of purpose, had a sense of meaning. I had a sense of ennoblement. But I think, ultimately, being in a war, while it can give you meaning, it’s probably meaning that is devoid of happiness. Real happiness only comes through love, not through war. And in wartime there is hardly any love at all.

ABERNETHY: I asked Hedges about the personal costs to him of covering wars.

Mr. HEDGES: The costs were tremendous. You know, there are images, memories that I’ll have to carry with me for the rest of my life. I did it far too long and I struggle with that kind of trauma. 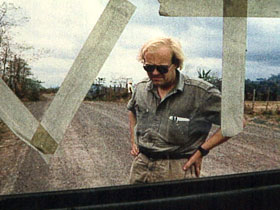 ABERNETHY: Hedges reported wars for 15 years, and saw many of his friends killed. Then, in 2000, he finally decided to quit. He came home and began writing his book, he says, to expose war’s effects.

Mr. HEDGES: All of that flag-waving, all of that jingoism, that dark intoxication that war brings. And that process of dehumanizing the other — that use of patriotism as a form of self-glorification, that worshiping of the capacity to inflict violence.

ABERNETHY: For all his hatred of war, Hedges has great respect for professional soldiers.

ABERNETHY: Hedges says governments always try to make war seem noble, their soldiers heroes, the other side evil. Religion too can support and mythologize wars, but Hedges says it does not start them.

Mr. HEDGES: If you look at the ethnic conflicts that I have covered, for instance, in Bosnia, religion did not cause that war. Rather, it was warlords … who appropriated religion and used religion as a way to prosecute the war and denigrate the other. In every case, I think religion was used. I don’t think religion was a cause.

ABERNETHY: The need to see war as personal heroism, Hedges says, is even greater now that war has been, in his word, industrialized.

Mr. HEDGES: I think that in modern warfare that importance of the myth has only grown, because the myth was always a lie, anyway. But it is even more of a lie now when there is a very impersonal quality to war. 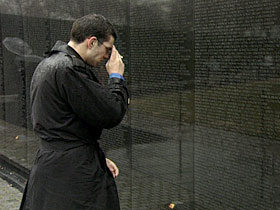 ABERNETHY: I asked Hedges about monuments to war, especially the Vietnam Memorial.

Mr. HEDGES: Our country has a terrible problem with Vietnam because, of course, it was a defeat. So what we choose to do is to ignore it. And I think that was very much behind what led Vietnam veterans to create the memorial.

ABERNETHY: And it’s a memorial to each individual?

ABERNETHY: Not to the war as a whole?

Mr. HEDGES: That’s right. It’s not some statue of, you know, that generic helmeted soldier gazing off into the sky. It individualizes the loss, the losses. 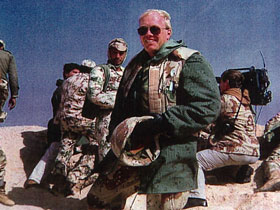 ABERNETHY: Hedges does not identify himself with a church, although his father was a Presbyterian minister and he is a graduate of the Harvard Divinity School. But his ideas and language bear strong influences of Christian theology.

(to Hedges): You write that your book is, among other things, a call to repentance. By whom, and for what?

ABERNETHY: If —and only if—there were evidence Saddam Hussein is about to attack us, Hedges would support a preemptive strike against Iraq. But he fears Americans underestimate the possible losses.

Mr. HEDGES: Once you get into urban warfare, which I have seen close up, all of the cruise missiles in the world won’t help you. I don’t think we are prepared at all as a nation for the kinds of casualties that potentially could take place. I mean, if even one sort of dirty bomb exploded next to a marine tank battalion, that tank battalion isn’t going to exist anymore in a matter of seconds.

ABERNETHY: Hedges concludes his book by saying that although war can give us meaning temporarily, it remains a drug for which the only antidote in the long run is love.

Mr. HEDGES: Love is the only force that finally can counter the force of death, the death instinct. And, you know, I remember when shells would come in, in Sarajevo. And at that, the most horrific moment of death, when people were literally lying in pools of their own blood, dying, family members, friends, brothers, sisters, spouses would claw through the crowds looking for their loved ones. And just as death seemed to radiate out from that point, at that same time love radiated out. And you can’t go through an experience like that and not understand the palpable power of love.

ABERNETHY: Hedges summed up his prescription in the last lines of his book.

Mr. HEDGES: The instinct must be to reach out to those we love, to see in them all the divinity, pity, and pathos of the human; and to recognize love in the lives of others, even those with whom we are in conflict, love that is like our own. Love has the power both to resist in our nature what we know we must resist and to affirm what we know we must affirm. And love, as the poets remind us, is eternal.