BOB ABERNETHY, anchor: UN Secretary General Kofi Annan urged the U.S. and its allies not to forsake humanitarian issues while waging the war. Annan said, “We must do everything we can to mitigate this disaster, which could easily lead to epidemics and starvation.”

For months, nongovernmental relief agencies have been trying to get ready for a potential humanitarian crisis. Among the active groups are many faith-based organizations that have a long history in the region. Kim Lawton has our special report. 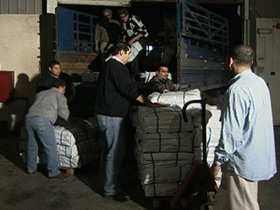 KIM LAWTON: As the U.S. launched war with Iraq, humanitarian groups geared up for a battle of their own. The Christian relief agency World Vision has been airlifting emergency supplies to Jordan, which borders Iraq. Included on this shipment last week: three 10-ton trucks and thousands of blankets, water containers, and plastic sheeting for temporary refugee shelters. Dave Robinson is one of the people coordinating World Vision’s work on the ground there. Despite all their efforts, he told us he is worried.

DAVE ROBINSON (World Vision, Middle East): The humanitarian costs of the conflict have not been fully assessed or fully planned for.

LAWTON: Relief groups have been preparing for numerous contingencies.

SERGE DUSS (World Vision, Washington, DC): We’re planning for the worst and hoping for the best. But we have to be realistic that the worst possible scenario could take place.

LAWTON: In the lingo of relief workers, Iraq is already classified as one of the world’s top “CHEs” — complex humanitarian emergencies. The nation’s infrastructure never recovered from the last Gulf War. And after 12 years of UN and U.S. sanctions, there’s an acute shortage of hospital supplies and medicines.

Mr. DUSS: We’re particularly concerned about children. Out of the population of 24 million in Iraq, 13 million are under the age of 17. Our biggest worry is, how are these children protected in the midst of the conflict that is taking place? 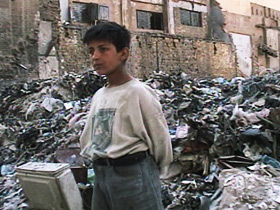 LAWTON: Nearly 60 percent of Iraq’s population was already dependent on food rations from the UN’s “Oil for Food” program. The UN suspended that program Monday, and there are, at best, only a few weeks of reserves in country.

LAWTON: The UN World Food Program has been stockpiling food in surrounding countries such as Turkey in hopes of being able to feed 900,000 people for 10 weeks. WFP has received about $7.5 million for its war contingency planning — most from the U.S. — but it still needs about $16 million more. A major concern is dealing with huge numbers of people likely to be fleeing their homes. An estimated 900,000 Iraqis were already uprooted.

Ms. ALBUQUERQUE: We predict that more people in the south, they will move into Iran.

Ms. ALBUQUERQUE: According to UN estimates, there’s quite a big range of numbers, from 600,000 to over a million, and some will say even 1.5 million. 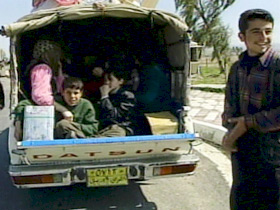 LAWTON: Some displaced people may try to stay in country. Others may seek refuge in neighboring states, although no one knows exactly where. Iraq borders six other nations, but the bulk of refugees are expected in Iran, Jordan, and Syria. Wherever they end up, they’ll have many needs.

LAWTON: And it’s a very big area to have to cover?

Ms. ALBUQUERQUE: It’s a very big area and again, it’s a problem also of access for the humanitarian organizations. How to reach these people and to make sure they have what they need.

LAWTON: Nongovernmental organizations say their job is complicated because the U.S. government is overseeing all humanitarian operations inside Iraq through offices at the Pentagon and the U.S. Agency for International Development.

Relief officials are urging that nongovernmental agencies have a greater role.

SANDRA MITCHELL (International Rescue Committee): More delinking of the humanitarian plans from the war plans is required to save lives.

LAWTON: The Bush administration says it has comprehensive plans for both immediate humanitarian assistance and long-term reconstruction in postwar Iraq. Many of the details are being kept confidential because they are tied to war plans. But officials said the government will spend at least $800 million over the next few months on emergency relief alone. 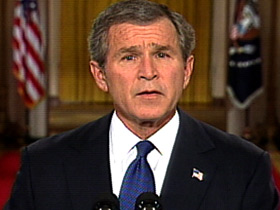 President GEORGE W. BUSH: If we must begin a military campaign, it will be directed against the lawless men who rule your country and not against you. As our coalition takes away their power, we will deliver the food and medicine you need.

LAWTON: As was the case with Afghanistan, much of the initial aid will be delivered by the U.S. military — something that deeply troubles humanitarian groups.

KEVIN KING (Mennonite Central Committee): With the U.S.-led coalition forces going in with one arm with bombs and the other arm, perhaps, with humanitarian aid to follow up, that gives us great pause and concern, because what you have is a politicization of this humanitarian aid.

LAWTON: Many humanitarian officials question the military’s credibility and competence to deliver aid.

Ms. MITCHELL: The military should do what it does best — fight wars. Confusing humanitarian and military activities carries great security risks for those delivering assistance. Aid workers, obviously, are not armed. We cannot defend ourselves and we must never be mistaken for members of the military.

LAWTON: Some agencies that traditionally receive U.S. grants for emergency relief projects have elected not to take government money for Iraq on moral grounds. Among them, Catholic Relief Services, the aid arm of the U.S. Catholic Bishops.

LAWTON: Numerous faith-based aid groups are raising money from private donors for a host of projects in and around Iraq. In one of the broadest-based efforts, several religious groups are partnering in the “All Our Children” campaign to deliver emergency medical supplies.

One of the partners, the Mennonite Central Committee, is also working on the refugee issue. For weeks now, MCC volunteers have been packing handmade blankets and emergency relief kits for refugees. Each kit contains basic personal hygiene supplies packed in a bucket, which can also be used to store and carry water. More than 10,000 refugee kits have already been sent to the region. 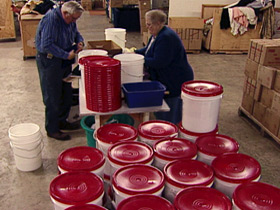 The Mennonites are also sending canned meat they process in their mobile cannery that travels around North America taking fresh donations. MCC leaders say their donors and volunteers are motivated by their religious beliefs.

Mr. KING: Again, we reaffirm, we go back to our faith and to our scriptures and read and realize that Jesus calls us to love our enemies, and what a powerful statement, given this time, that we can do and respond.

LAWTON: World Vision is delivering emergency supplies to Jordan, Syria, and Iran, partnering with the Islamic group Red Crescent and other relief agencies. Their immediate task is assisting Iraqi refugees in border areas. They hope to soon move into Iraq as well, but war complicates everything.

Mr. ROBINSON: Iraq has been closed to many international organizations. It’s very difficult to assess the situation on the ground, and to mobilize support has been difficult.

LAWTON: For now, they are waiting to see how the war develops. And like all humanitarian groups, they fear that even plans for the worst-case scenario may not be enough. I’m Kim Lawton reporting.