LUCKY SEVERSON, correspondent: Shell Stafford sits on her front porch in the East Lake neighborhood of Atlanta and watches the world go by. She’s seen a lot since she moved here as a kid.

SHELL STAFFORD: I told a couple of school friends, yeah, we're moving out of the neighborhood, and they said, where you moving to? I said, East Lake. They scared me so bad: Oh my God, you’re going to get killed!

DR. ROBERT LUPTON (Founder, FCS Urban Ministries, and Author, Toxic Charity): It was very rough. It was high crime area that we moved into.

SEVERSON: That was over 30 years ago. Bob Lupton, a psychologist and an elder in his Presbyterian church, moved his family from a very comfy suburban home into the heart of South Atlanta. It was not a move up. 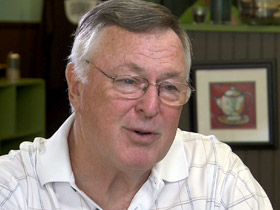 LUPTON: You can’t work with struggling families very effectively unless you’re involved in the environment that impacts on them every time they step out of the door.

SEVERSON: The very first Christmas he was there to watch parents hand out gifts that had been donated by his church group.

LUPTON: And that’s when I saw something that was very shocking to me. Of course, the moms were gracious, a little embarrassed, but if there was a father in a household he just disappeared. He was gone out the back door. And it dawned on me what was happening was these parents were being exposed for their inability to provide in front of their own kids. And the moms would endure that indignity for the sake of the kids, but it’s just more than a father’s pride could handle.

SEVERSON: And so the next year he asked donors to bring the gifts unwrapped, and they’d set up a little toy store with yard sale prices. Nothing for free.

LUPTON: One thing we learned was parents would a whole lot rather work to earn to purchase the toys they knew would delight their kids at Christmas than they would stand in the free toy lines with their “proof of poverty” and take gifts that someone else had purchased for them. 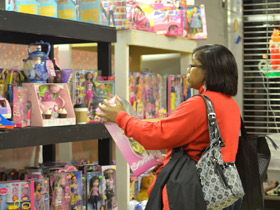 SEVERSON: The notion that just giving charity away often ends up doing more harm than good has become Lupton’s mission, and it seem to be gaining converts here and around the country.

SEVERSON: The Community Grounds coffee shop is an example of Lupton’s philosophy at work. The coffee is subsidized by donors. It’s not free, but it’s very good, and it’s in the heart of South Atlanta, where there was no coffee shop before.

Community Grounds is connected to the Carver Neighborhood Market. The groceries aren’t free, they’re subsidized, and before the market was here it could take Taiyanna Sims two or three hours round trip by bus to get to the closest supermarket.

TAIYANNA SIMS (Third-Generation South Atlantan): It was a major inconvenience just to go to another neighborhood to get groceries when you couldn’t get them here, because there was no supermarket here.

KATIE DELP: There have not been a lot of new businesses in this community for a number of years, so we don’t want to open a food pantry. We want to open a grocery store. 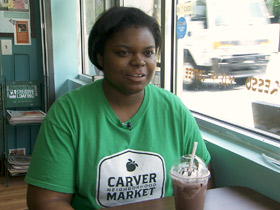 DELP: Our ministry is different because we focus on development, as opposed to just relief. We want to end poverty, more than just relieve people from the pain of poverty. So we want to change communities.

JIM WEHNER: You don’t move anybody out of poverty by giving them a house.

SEVERSON: Jim Wehner was a pastor for nine years, frustrated that so many of his parishioners were trapped in poverty. So he joined FCS, and now he helps turn empty houses into affordable homes. He says that could be an important answer to the problems of inner-city neighborhoods.

SEVERSON: For instance, these houses aren’t refurbished only for low-income families. They’re part of a plan to “re-neighbor” the neighborhood. 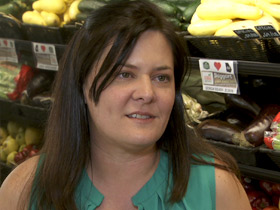 DELP: So re-neighboring, what we mean by that is, bringing families who may not traditionally live in low-income neighborhoods—a lot of times that means families of means—to come into communities to create a mixed-income neighborhood because we need a diverse income base in order for these neighborhoods to be revitalized.

SEVERSON: Katie and her family are an example of re-neighboring. They moved here.

(speaking to Katie Delp): Did you move into this neighborhood?

SEVERSON: How’s that been? 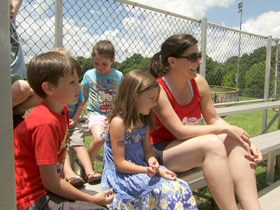 DELP: We’ve lived here for 14 years now, and it has just been a real gift to our family. We’re able to raise our kids in a place of diversity.

Kickball Announcer: “Carver with the victory!”

SEVERSON: And Tanisha Corporal is able to raise her son, Cairo, in a real home in a real neighborhood, with the help of a subsidized mortgage. She works at an Atlanta charter school but couldn’t afford a conventional mortgage. She says she’s experienced traditional charity first hand.

TANISHA CORPORAL (Charis Community Housing Homeowner): I’ve worked for nonprofit communities and done case management, and it’s kind of a hand out instead of a hand up.

LUPTON: I think this is an example of the way a community can be turned around. Not only south Atlanta that we’re in now, but four other neighborhoods that we’ve seen dramatic changes in over the past three, four decades.

SEVERSON: One of the most striking accomplishments Lupton has been involved in has been the transformation of the community surrounding the once-famous East Lake Country Club. It was the home course of Bobby Jones, perhaps the greatest amateur golfer of all time. Then the money moved to North Atlanta, and the government surrounded the course with low-income housing.

LUPTON: It was like the death knell for the community: 650 units of poorly managed public housing, and it became a cancer. 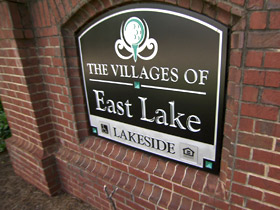 SEVERSON: And then a developer said he would refurbish Bobby Jones’s club and get high rollers to join up and contribute to the East Lake Community. Could Lupton help?

LUPTON: That was the beginning of starting to acquire property, buy crack houses …

SEVERSON: And with some government help, rebuild a mixed-income, not a low-income community.

LUPTON: That was a very exciting—very complicated, but very exciting transformation that actually reshaped history.

SEVERSON: East Lake is now the home of a major PGA tournament and the mixed-income community that is home to Shell Stafford. There’s something you should know about Shell. She brought up six kids by herself. When they were young, she got on her knees and prayed for some help in raising them.

STAFFORD: All I want is for every last one of my kids to graduate high school. Because the percentage of black children just dropping out is so high. I said, “I don’t want two to graduate. I don’t want one. I want all.” 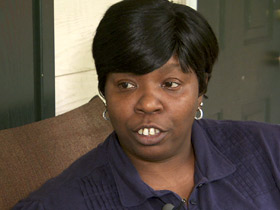 LUPTON: The mistake that we make is that we think that folks that can’t pull their full weight can’t pull any weight.

SEVERSON: Over the years, Lupton has had his critics.

LUPTON: Most of the negative pushback that I get are from churches who have volunteer programs, clothes closets, food pantries, soup kitchens that the volunteers in the church are very excited about working in, and they do that from a good place in their hearts, so it’s rightly motivated. But for them to think that this good service they’re providing is hurtful is a hard message.

SEVERSON: He says there are times when one-way giving is the only way—when someone is hungry, or in times of crisis, like Katrina. But after the crisis is over, Lupton believes the one-way giving needs to stop and the rebuilding of lives with dignity needs to begin.

LUPTON: I find within the overwhelming majority of my neighbors that are low-income a real desire to be useful, to be productive, and if we can make those connections, decent jobs that will enable them to support their families.

SEVERSON: How does it make you feel about human nature?

LUPTON: I think there’s a basic stamp of the divine that’s in all of us, and I want to encourage that. I look for that. So maybe it’s in what you’re looking for that you find.

SEVERSON: Lupton says his book Toxic Charity has gone viral, starting discussions in churches, nonprofits, and foundations around the country. His speaking schedule can attest to that.

When doctors take the Hippocratic Oath, they swear to uphold certain ethical principles. In his book Toxic Charity, Lupton has written what he calls “the oath for compassionate service.” It includes principals like “never do for the poor what the poor can do for themselves,” “limit one-way giving,” “empower the poor,” “listen closely, especially to what is not being said,” and above all, "do no harm."

Kickball Announcer: “We have FCS Urban Ministries in the building, and we have a catch! Okay, Goldilocks! We see you, Boo!”

Urban activist and Christian community developer Bob Lupton challenges common conceptions about modern charitable work by arguing that most charity is ineffective and does more harm than good. He advocates letting the poor learn to help themselves and encouraging the well-off to live alongside the poor. Lupton is the founder and president of FCS (Focused Community Strategies) Urban Ministries and the author, most recently, of “Charity Detox: What Charity Would Look Like If We Cared About Results.” Writes Lupton: “We cannot serve people out of poverty.”

Read an excerpt from Charity Detox: What Charity Would Look Like If We Cared About Results by Robert D. Lupton (HarperOne, 2015): 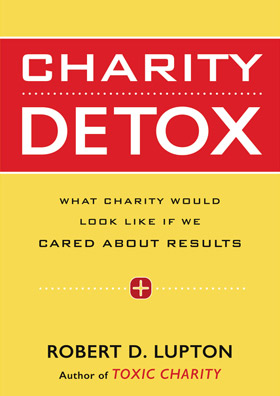 Do we really want the poor to thrive?

Conducting tours for concerned suburbanites through my inner-city neighborhood is a routine part of my PR and fundraising responsibilities for our nonprofit organization. Visitors expect to see boarded-up houses, trash-strewn vacant lots, dangerous-looking drug dealers hanging out on street corners. So when I drive visitors down attractive streets with nicely landscaped bungalows, past my house with rockers on the wide front porch, I frequently hear comments such as, “Wow, this is pretty nice—not what I expected in a poor community.” To which I reply, “It should look nice after thirty years of community development work.” My temptation, of course, is to show them the roughest blocks so that they will be moved to become involved with our ministry. The streets that are thriving don’t seem to touch hearts in the same way.

We are moved by need. Volunteerism, so huge in our culture, is propelled by meeting need. Does this mean, then, that we have a subliminal motivation to perpetuate poverty so that we always have someone to serve? No, I would never suggest such a thing. It would be unfair, cruel even, to question the motives of caring volunteers who sincerely desire to make a difference in the world. Yet there is some reason that we seem content to invest our billions in aid and millions in volunteer work-hours year after year despite seeing almost no positive change in poverty rates. I choose to believe that the reason is a lack of knowledge rather than a lack of heart.

We have been led to believe that our volunteer service alleviates poverty. We have accepted this as fact. This is wrong. If there is one message that this book attempts to drive home, it is that we cannot serve people out of poverty. And yet our massive service industry is based upon this false premise. If we truly do want to see the poor thrive, our entire way of thinking, of believing, must change.

So again: Do we really want to see the poor thrive? If we can honestly answer yes to that question, if we can affirm that it is God’s desire that all people share in the abundance of our world, that shalom (peace, prosperity, well-being) is the divine design for humanity, then we can embark with confidence on a mission to transform the highly popular yet tragically flawed compassion industry.