LUCKY SEVERSON, guest anchor: Now, a conversation about prayer during a time of war. Bob Abernethy went to Northampton, Massachusetts, to talk about prayer in wartime with two people who both study prayer and practice it:

BOB ABERNETHY: Carol Zaleski is a professor of religion at Smith College. Her husband Philip Zaleski is a religion writer and editor, and together they are writing a book about prayer in all cultures.

PHILIP ZALESKI (Religion Writer and Editor): Prayer is communication between the human realm and the transcendent realm, which for most people means trying to communicate with a personal God, coming into contact with a person who cares about them and loves them and can help them out. 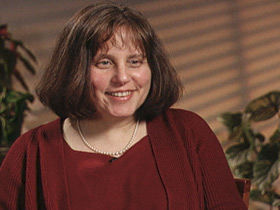 Dr. CAROL ZALESKI (Professor of Religion, Smith College): The basic stance is one of humility. And it usually involves a request of some kind but also can just be an effort to come into a deeper relationship with the divine.

ABERNETHY: The war has produced a vast amount of prayer around the country — in private, in small groups, in worship services, and on the Internet. Carol Zaleski says one common prayer is for protection.

Dr. ZALESKI: In a sense all of us, whatever our views about the war currently may be, we’re all implicated in it. And we all feel ourselves vulnerable and in some degree of moral distress. And I think that these prayers don’t have to do with becoming invulnerable in the sense of insensitive, but with recognizing that we are not alone. And that, in general, is what prayer does for people in times of war, in times of insecurity. Prayer provides that kind of shield, that kind of enveloping warmth, and releases hope. It also connects us to other people. 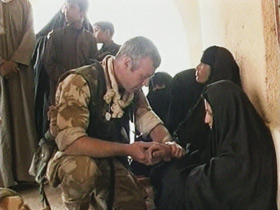 There is this sense that we are somehow — for us to really win we have to win not only the conquest of land and eventually of the nation, but we have to win by winning the hearts of the people, which means caring for the people and even loving the people, which includes loving our enemies. It’s an extraordinary thing which I’ve never seen before. I’ve never run across it in reports of past wars. I think we have something different going on here.

Mr. ZALESKI: The general assumption is no, it doesn’t make any difference. Whatever you are asking for, the assumption is that God understands and can respond in the appropriate way.

Dr. ZALESKI: On the other hand, it is very comforting, and very often, soldiers and people in war situations say that they need to hear that they are being prayed for.

Right now there is a big market in religious objects, prayer cards and so on, that people are giving to their loved ones who are shipping out. And to carry that prayer card and to know that you are being prayed for is a tremendous bond of connection and hope.

Mr. ZALESKI: It may be an old saying, but I hear it these days, that “Courage is fear that has said its prayers.”

And this speaks to all of us, I think, in this time of war. And I think a statement like that tells us that prayers can help all of us, no matter what our situation. We all need courage to make it through these days. 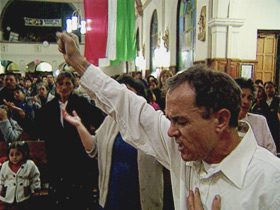 ABERNETHY: Does it make a difference how many people pray for something or how fervently they pray?

Mr. ZALESKI: I believe that the more people pray for something, well, it’s like more people knocking on a door. It may be more likely that the door will be opened. Every person that prays is a soul who has a legitimate claim upon God. So how can God ignore a chorus of souls? It seems it would carry a natural force with it.

Dr. ZALESKI: The first thing you are praying for is for God’s will to be done. And you may not know exactly where that will lies. You try to be on the right side of each issue, but the final issue is in God’s hands.

ABERNETHY: What can be said when someone prays and prays and then the prayer isn’t answered?

Dr. ZALESKI: This is the great problem of prayer. The standard answer in theological circles is that God has answered your prayer, one way. It’s just a matter of how you understand that answer. Very often, it’s not in our best interest to get the answer that we had in mind. 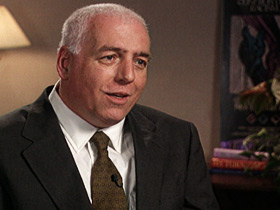 But still, that’s a hard thing to say to someone who has a very sick child and is praying and is asking for the prayers of others. It’s very hard to try to give a pat answer to that problem of unanswered prayers.

Mr. ZALESKI: When you run up against a question like the Holocaust — what happened in the Holocaust, and why were the prayers of so many millions of people seemingly unanswered? — all we can say is that it is a mystery. That may be a lame answer, but it is the only one we have. We just do not know.

So all we can do sometimes is stand in front of mystery and bow our head and pray some more.

Dr. ZALESKI: I think our prayer is in that kind of context of providing the sense of assurance and family solidarity and human solidarity within which we can recognize that there are dangers and that there is violence and greed and evil in the world, but that it does not have the last word.

ABERNETHY: What would be appropriate prayers during this time of war? 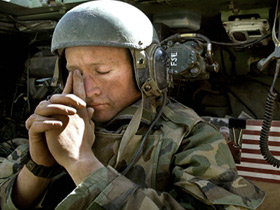 Dr. ZALESKI: I think it would be the prayers that are closest to your heart. And very often that might be a childhood prayer. And it might be the more, the standard prayer, The Lord’s Prayer, for Christians, is good for all situations.

One of my favorites is the prayer of Lancelot Andrewes, the Anglican bishop and one of the translators of the King James Bible. It goes like this (reading): “Be, Lord, within me to strengthen me, without me to preserve, over me to shelter, beneath to support, before me to direct, behind me to bring back, round about me to fortify.” So that’s a complete 360-degree circuit of divine Providence.

ABERNETHY: One of the Zaleskis’ heroes is Mohandas Gandhi, the Indian spiritual and political leader. Carol Zaleski said one of Gandhi’s favorite prayers and hymns was “Lead Kindly Light.”

Dr. ZALESKI: And that prayer has this wonderful quality of conveying a sense of security in the mystery, in the face of mystery: “I don’t need to see everything in the future. I just need enough light to take the next step.”