BOB ABERNETHY, anchor: In the U.S. and Europe, the other best-known Buddhist leader, besides the Dalai Lama, is the renowned Vietnamese Buddhist monk, Thich Nhat Hanh. He, too, has been on a U.S. tour, ended this past week — speaking, leading retreats, and promoting his latest of more than 75 books, Creating True Peace.

Many people may find Nhat Hanh’s teachings Utopian, but he is convinced they are practical and proven. He has opposed violence for more than 50 years. Martin Luther King, Jr. nominated him for a Nobel Peace Prize.

Nhat Hanh insists he is a monk, not a politician. But as he toured the U.S. he spoke not only of Buddhist practices but also — often and critically — of American policies in the Middle East.

We caught up with Thich Nhat Hanh during late afternoon rush hour on Capitol Hill, in Washington. Shielding his eyes from the sun, he practiced his customary attentive, so-called mindful walking — to the Library of Congress to talk to Members of Congress, and others, about peace in a world of terrorism. He said since 9-11 the level of hate and violence has gone up. He blamed America’s use of force. 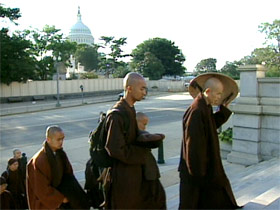 THICH NHAT HANH: Using violence to suppress violence is not the correct way. America has to wake up to that reality.

ABERNETHY: That’s not a sentiment you hear everyday at the Capitol. Nor is Nhat Hanh’s recommendation to this bitterly divided Congress that its members practice what he calls deep listening (to each other) and gentle speech.

Nhat Hanh became a Zen Buddhist monk when he was 16. His title “Thich” means, symbolically, in Vietnamese, that he is a member of the Buddha’s extended family.

During the Vietnam War, Nhat Hanh actively opposed the fighting, offending all sides. He developed what he called Engaged Buddhism: going beyond meditation to campaign for peace, care for refugees and help rebuild bombed villages.

NHAT HANH: If you hear the bombs falling, you know, you know that you have to go out and help.

ABERNETHY: Because of his anti-war activities, Nhat Hanh had to leave Vietnam. In the 1980s, he founded a Buddhist community in France and has spent most of the years since teaching, leading retreats and writing. In all, he has written more than 75 books. 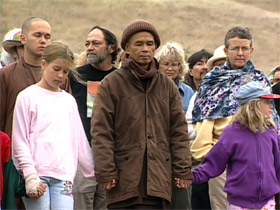 Nhat Hanh’s message emphasizes simple practices. Concentration on every activity — walking, breathing, eating, everything. He says this mindfulness leads to understanding the roots of suffering, which encourages compassion that can dissolve anger.

On this year’s U.S. visit, he led private retreats for several members of Congress in Washington, and for police officers in Wisconsin.

I asked him what Buddhism has to say to people of other religions.

NHAT HANH: I think if Buddhism can help, it is the concrete methods of practice. We have the same kind of teaching, but in Buddhism there are more concrete tools.

There are ways to transform and to reduce the amount of suffering in our families, in our schools. We, as practitioners of transformation and healing, we know how to do it, how to reduce the level of violence.

ABERNETHY: Are there times when it is right to use violence in order to protect yourself, or your family, or nation? 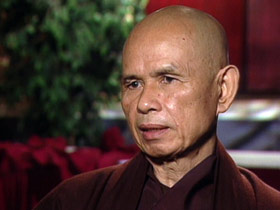 NHAT HANH: If you see someone who is trying to shoot, to destroy, you have to do your best in order to prevent him or her to do so. You must. But you must do it out of your compassion, of your willingness to protect, and not out of anger. That is the key.

ABERNETHY: Can a person be both a Buddhist and a Christian?

NHAT HANH: Sure. There are many, many Christians who practice Buddhism and they become better and better Christians all the time.

ABERNETHY: Nhat Hanh thinks violence in America has increased in recent years. He says one reason is too much production and consumption of the wrong kinds of things — movies and television, for instance, that stimulate craving and violence. 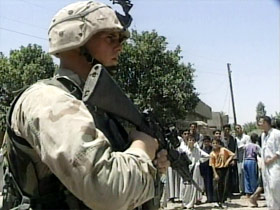 NHAT HANH: I think America is now caught in Iraq, like in Vietnam not very long ago. And you believed that search and destroy is the right path. But the more you continued that kind of operation, the more Communists you created, and finally you had to withdraw. I am afraid that you are doing exactly the same thing in Iraq.

The only way for Americans to get emancipated from this situation is to help build the United Nations into a real body of peace so that the United Nations would take over the problem of Iraq and the Middle East. America is powerful enough to do that.

ABERNETHY: At the Washington Hebrew Congregation, and elsewhere, Nhat Hanh made the same appeal for more UN authority. He also urged Americans to lobby their elected officials.

NHAT HANH: We have to offer them our insight, our compassion. We cannot just afford for them to be surrounded by advisers who do not have that insight, that compassion.

ABERNETHY: There was no way to tell how many people here agreed with Nhat Hanh, but there was no doubt about their interest in what he had to say.

Thich Nhat Hanh has scheduled a retreat for Israelis and Palestinians next month in France. He has done this before, and he says — for those attending — it always brings reconciliation.