BOB ABERNETHY, anchor: According to a recent survey by the Pew Research Center, an overwhelming number of Americans — 83 percent — believe that Jesus rose from the dead. This Easter season, Mel Gibson’s controversial movie THE PASSION OF THE CHRIST has provoked unprecedented national conversation about the crucifixion. But some Christian theologians believe those conversations have not gone far enough. Kim Lawton sat down with prominent author and Episcopal priest Fleming Rutledge to reflect on crucifixion and resurrection.

KIM LAWTON: The styles and traditions may vary, but on Easter Sunday, all Christians celebrate a central tenet of their faith: that Jesus Christ was crucified and three days later, he rose again. The story may be 2,000 years old, but Christians believe it still has meaning today.

Reverend FLEMING RUTLEDGE: Jesus is alive. There’s never a possibility of the event fading into the mists of the past because this is about a living God who acts and speaks in our own time and will continue to do so. 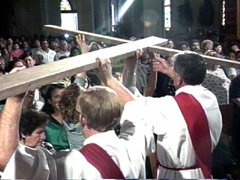 LAWTON: Over the centuries, the story of Jesus’ crucifixion and resurrection has been told, and retold, through art, music, and drama. And public interest hasn’t waned.

(To Rev. Rutledge): What is it about the story that still intrigues us?

LAWTON: Fleming Rutledge was one of the first women to be ordained in the U.S. Episcopal Church, and she has been called one of America’s best preachers. A popular Holy Week speaker, she has written widely about crucifixion and resurrection themes. She says visual depictions such as Mel Gibson’s THE PASSION OF THE CHRIST cannot convey the full Easter story.

Rev. RUTLEDGE: The meaning of the cross can’t be found in looking at the beating and the flaying and the nailing. The meaning can only be grasped through very deep engagement with the various portions of Scripture where this is proclaimed. It is the word, the words, the message that brings life. 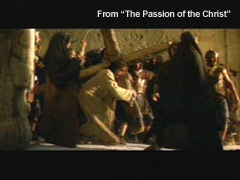 LAWTON: In Gibson’s depiction, virtually the entire film focuses on the crucifixion and the violence leading up to it; only a few seconds at the end are devoted to the resurrection.

(To Rev. Rutledge): Can the crucifixion be understood apart from the resurrection?

Rev. RUTLEDGE: The crucifixion and the resurrection were a single event. The incredible discrepancy between the horrible obscenity of the crucifixion and the glory of the resurrection is very important. It’s that contrast that gives the story such power. Otherwise it’s just another story about a dying and rising god. There are zillions of those. But this is a story about a historical event that was then reversed.

LAWTON: Differing streams of Christianity have at times placed more emphasis on one over the other. Theologians have criticized many Protestants, and particularly Evangelicals, for jumping too quickly to the happy ending of Easter without first meditating on the grief and horror of Good Friday. 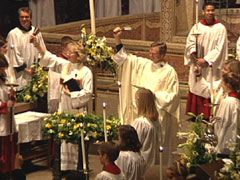 LAWTON: Other Christians may concentrate on the suffering of the crucifixion without remembering the rest of the story. But Fleming Rutledge says the resurrection vindicates the crucifixion.

Rev. RUTLEDGE: No one would be interested in the crucifixion if it weren’t for the resurrection. We wouldn’t even know that there had ever been such a person as Jesus of Nazareth, if he had not been raised from the dead. That is my view. We don’t know the names of any other crucified victims in history. Something happened. Exactly what it was is a matter of dispute, but something tremendous and unpredictable and unforeseen and unprecedented happened. And it was a victory over sin and death.

LAWTON: Rutledge has preached Holy Week sermons for nearly 25 years. She’s keenly aware of the need to come up with something fresh to say every time. But she says she rarely finds herself at a loss.

Rev. RUTLEDGE: One of my deepest convictions is that the Scripture is ever renewing, and that’s one of the aspects of Christianity that not everybody fully understands. Scripture, the Holy Bible — one doesn’t need to be a fundamentalist at all to understand how there is life that flows from it, new, every day. The challenge is communicating it in a fresh way, so that the old story becomes the new story and people begin to be aware of it: “This is my story, too.”

LAWTON: And once again this year, Christians are indeed celebrating that story as their own.