BOB ABERNETHY, anchor: Now, we continue our special series on religious voting blocs. This week, Muslim voters. No one is sure exactly how many Muslims there are in the U.S. Estimates range from two million to more than six million. In recent years, Muslims have been trying to organize into a political body that can influence elections. But they’ve faced significant challenges, particularly since 9/11. Kim Lawton has our report.

KIM LAWTON: At festivals and meetings across the country this year, Muslims have been hard at work trying to forge a political force to be reckoned with. They’ve organized massive voter registration drives, get-out-the-vote rallies, and political education seminars. 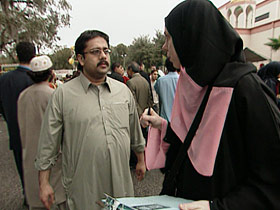 Concern over civil rights is driving much of the new effort. Muslims feel unfairly targeted by post-9/11 security crackdowns, and their frustration is motivating them to become politically involved, many for the first time. Gulten Ilhan has lived in the U.S. for 22 years. She just became a citizen earlier this year and has already jumped into politics.

LAWTON: But the American Muslim community knows all too well that politics can be full of pitfalls. Prior to the 2000 election, leaders of several Islamic groups banded together in an effort to form an influential, unified voting bloc. They endorsed George W. Bush because of his positions on the Arab-Israeli conflict and civil liberties.

Professor Amaney Jamal teaches politics at Princeton University. She says the majority of American Muslims did vote for Bush in 2000, but that many now feel betrayed by his administration’s antiterrorism policies and by the war with Iraq.

Professor AMANEY JAMAL (Princeton University): They did everything that was expected of good American citizens — to engage the political process, to meet with candidates — and then that democratic process brought in a leader who turned around “against” the community in ways with the civil liberties restrictions and infringements. It really dealt the community a blow. 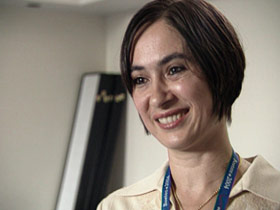 LAWTON: Muslim support for Bush plummeted over the last four years. Some Muslims are now actively campaigning against him. At least 40 Muslims were delegates to the Democratic National Convention in Boston. Gulten Ilhan was one of them. She says she was motivated by her faith.

LAWTON: But Bush still has support within the Muslim community. Muhammad Ali Hasan is co-founder of a group called Muslims for Bush, which has a Web site with the same name. He says Muslims can support Bush for bringing liberation and democracy to the Islamic world.

Hasan also praises Bush’s outreach in the Muslim community, particularly his meeting with Muslims in the aftermath of 9/11 and his assertion that Islam is a religion of peace. 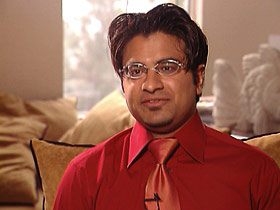 MUHAMMAD ALI HASAN (Muslims for Bush): He didn’t have to do that. I think his poll numbers would have gone up if he had blamed Muslims. It took a lot of character and a lot of morality not to blame Muslims for the attacks of 9/11. And I think just right there Muslims owe a great debt of gratitude toward President Bush.

LAWTON: And Hasan still has faith in Bush over the civil rights issue.

Mr. HASAN: Muslim groups right now have a strong relationship with Bush. No other politician meets with them as frequently as President Bush does. And because of that reason, we are guaranteeing that civil rights issues and concerns are going to get better every single day.

LAWTON: The Bush campaign hasn’t given up on Muslim voters. At this candidates’ forum near Detroit, a Bush-Cheney representative argued that Bush is the pro-Muslim candidate.

UNIDENTIFIED MAN #1: Our government will be and is responsive to this community.

LAWTON: Professor Jamal says such efforts have actually recaptured a measure of support for the president among Muslims.

Prof. JAMAL: They have been longing to be heard in this country, and they feel that Bush is basically extending himself to this community in ways that Kerry has not. 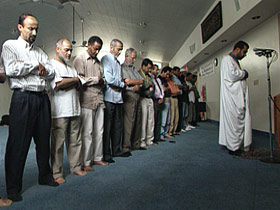 LAWTON: Although surveys suggest the majority of Muslims still will likely vote for John Kerry, many are frustrated that he hasn’t more directly addressed their issues.

LAWTON: Estimates of the actual number of registered Muslim voters vary widely. But they could be pivotal. There are large Muslim populations in key electoral states, particularly Michigan, Ohio, and Florida.

Given their great ethnic and theological diversity, American Muslims have struggled to craft a common political approach. African Americans, who are traditionally Democratic, make up a significant part of the community. Muslims of South Asian, Arab, and African descent tend to be more politically divided.

Leaders in the Muslim community are still on the defensive about their decision to endorse George Bush four years ago. African Americans in particular felt they didn’t have enough say. And there is strong debate over the wisdom of even trying to form a unified voting bloc. 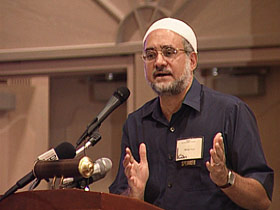 Professor IHSAN BAGBY (At Islamic Society of North America panel): Our potential of swinging an election is heightened when you have one body voting as one voice.

UNIDENTIFIED MAN #3 (In Audience): Please don’t confuse the issue. Don’t endorse anybody, for God’s sake, because last time when you did it, you messed up.

LAWTON: Muslim leaders say their community has learned a lot of political lessons over the last four years — lessons that have led to a new political maturity.

Prof. JAMAL: It’s more than just about voting for issues. It’s really about being appreciated and being seen as a viable entity in the American political process, an important element, if you may, in the fabric of mainstream American political life.

LAWTON: Because they believe so much is at stake, Muslims across the spectrum say they are determined to make their voices heard, for this election and for the long haul.