In Praise of Ordinary Time
by David E. Anderson

“A good sermon,” Marilynne Robinson writes, “is one side of a passionate conversation.” It has to be heard in that way. So, too, a good novel. It is a conversation among the novelist, the reader, and — as in the case of a sermon, perhaps, for some — God.

That may be true of all first-rate fiction, whether acknowledged or not, because the best novels are always a dialogue — perhaps an argument, perhaps a prayer — with the world and its meaning. In GILEAD, Marilynne Robinson’s second novel, God works as a second, unstated addressee, a mostly implied presence whose reality is suggested by the pervasiveness of prayer. 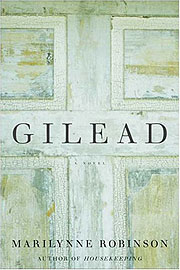 GILEAD is better than a good book. It is a slim, spare, yet exquisite and wonderfully realized story that will long stand as one of fiction’s finest reflections on the sacramental dimensions of life, especially the Christian life lived in the routines and wonderments of prayer. It is, like a good sermon, a passionate meditation.

The book is slender only in the number of its pages — a mere 247. Otherwise, it is a fuller, richer and more deeply textured novel than most contemporary fiction twice its size. Robinson makes use of a form — the epistolary novel — that is classic but one of the most difficult to pull off well. It can often seem forced and cumbersome and — to the contemporary reader more attuned to e-mail and instant-messaging rather than the carefully considered craft of composing a letter — irritating in its deliberate pace.

Robinson’s epistle takes the form of a letter from 76-year-old John Ames, a fourth-generation Congregationalist minister, to his just-about-seven-year-old son. Ames is suffering from heart disease, and his letter, written in 1956, is a summing up of the past sprinkled with anecdotes and advice and sketches of the present, especially of his son and his wife and his best friend, also a minister.

Robinson has given her protagonist a strong, unique voice — he disdains what he calls the pulpit talking — that seems in its own way biblical but not the Bible of the King James Version. It is rather the more vernacular English of the Revised Standard Version, the translation of the KJV published in the early 1950s that aimed to capture the plain speaking of Americans at mid-century. This “letter from John” to his young son also calls to mind the pastoral letters near the end of the New Testament in which another John addresses “my little children” and his “beloved,” and which, like John Ames’s letter, are suffused with a sense of light.

Ames’s letter is quietly but vividly told family history: the apparently disjointed recollections jotted down over time of his grandfather, a militant abolitionist given to biblical-type visions who went to Kansas to join John Brown and lost an eye in the Civil War; his father, who, recoiling from his own father, became a pacifist; his brother, whose studies in Germany led him to disbelief and alienation from their father; and his Presbyterian minister friend Boughton and his family, especially Boughton’s son and Ames’s namesake, John Ames Boughton, another prodigal whose homecoming is eagerly awaited.

Fathers and sons and their mysterious and maddening relationships — loving, prodigal, forgiving — are the spine of Robinson’s story, and the biblical resonances reinforce how timeless and wondrous those themes are. Ames himself was the good son in the prodigal parable he tells his own son, “one of those righteous for whom the rejoicing in heaven will be comparatively restrained.” But, he adds, almost in the “pulpit voice” he tries to subdue, “There is no justice in love, no proportion in it, and there need not be, because in any specific instance it is only a glimpse or parable of an embracing, incomprehensible reality. It makes no sense at all because it is the eternal breaking in on the temporal.”

Less obtrusive but also a constant theme in the novel, as it is in American life, is race. Ames’s grandfather is formed by the abolitionist vision; the Iowa town of Gilead was a stop on the Underground Railroad (Ames’s recounting of pieces of that history provides the novel with some comic elements); and race figures importantly in the novel’s denouement. Robinson’s handling of the issue is careful and tragically appropriate for the story’s time: two years after the landmark BROWN V. BOARD OF EDUCATION school desegregation decision and just months before the Montgomery, Alabama, bus boycott, which would launch the modern civil rights movement. In a moving passage, Ames writes about an arson fire at the black church in town: “That church sold up some years ago, and what was left of the congregation moved to Chicago. … The pastor came by with a sack of plants he’d dug up from around the front steps, mainly lilies. He thought I might want them, and they’re still there along the front of our church, needing to be thinned. I should tell the deacons where they came from, so they’ll know they have some significance and they’ll save them when the building comes down. I didn’t know the Negro pastor well myself, but he said his father knew my grandfather. He told me they were sorry to leave, because the town had once meant a great deal to them.”

Very little of the politics of the outside world intrudes directly into Ames’s letter to his son, but the events that forge and form the characters — war and the Great Depression especially — are there as a constant backdrop to what, in a liturgical calendar, would be called “ordinary time.” GILEAD is a profound, prayerful meditation on, and a joyous thanksgiving of, life in “ordinary time” — the sacramental character of physical, everyday existence as well as “the gift of physical particularity and how blessing and sacrament are mediated through it.”

“I have been thinking lately,” Ames writes, without either despair or melancholy at the approaching end, “how I have loved my physical life.” As the novel concludes, he tells his son, “It has seemed to me sometimes as though the Lord breathes on this poor grey ember of Creation and it turns to radiance — for a moment or a year or the span of a life.” It is a vision of transfiguration — the ordinary stuff of life made extraordinary in the apprehension of it. Marilynne Robinson has done the same with the life of John Ames. In the imagining of it she has shown the sacramental possibilities of the world.