BOB ABERNETHY, anchor: Next week brings Holocaust Remembrance Day on May 5th, and we have a story today about trying to confront anti-Semitism in a small city in Poland.

Before World War II, 80 percent of the population of Dzialoszyce was Jewish -- nearly 10,000 people. Then came the Nazi Holocaust, and right after the war, when a few Jews returned, they were killed by Poles. Now there is not a single Jew left.

Menachem Daum is a New York filmmaker, the son of Holocaust survivors, who grew up hearing stories about Polish anti-Semitism. His father-in-law is from Dzialoszyce, so recently Daum went there with his two sons to find out about the Jews who once lived there and about anti-Semitism there today.

MENACHEM DAUM: In Dzialoszyce, Poland, near Krakow, an overgrown forest hides the site of the town's former Jewish cemetery.

Only a handful of elders still remember what happened here. 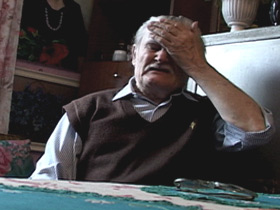 POLISH SURVIVOR #1 (Speaking in Yiddish) (With Subtitles): We heard they were about to expel and kill us Jews. We went to the cemetery and prayed to God for help. We threw ourselves on the graves and said psalms. But, you see, it didn't help.

POLISH SURVIVOR #2 (Speaking in Polish) (With Subtitles): I was two kilometers from Dzialoszyce and heard the Jews screaming. They were crying and wailing as they bid farewell to their ancestors.

DAUM: The very next day, the Germans deported the Jews of Dzialoszyce. Those unable to walk, about 1,500 sick and elderly, were shot and buried in this ravine at the foot of the cemetery.

KAZIMIERZ WOZNIAKOWSKI(Polish Witness) (With Subtitles): If someone didn't go, they were shoved in. Many were buried alive as the drunk German was shooting. When I looked out, I almost fainted. My camera fell out of my hands. My father was sitting right here, and he was crying. 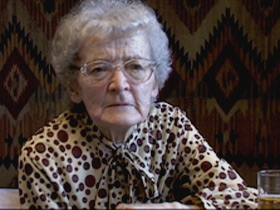 VOICE OF FEMALE TRANSLATOR (With Subtitles): What happened to those tombstones and the cemetery wall?

MARIA PILNIAKOWSKA (Polish Witness) (With Subtitles): I won't tell you everything because, as they say, it's better to talk about good things.

DAUM: The only sign of 350 years of Jewish history in Dzialoszyce that survived the Holocaust was the town's once magnificent synagogue. However, after the war, this important link to Jewish history was also destroyed.

I look at the town's young people and wonder what can be done to prevent old hatreds from being passed on to a new generation. In New York I put this question to the Consul General of Poland.

AGNIESZKA MAGDZIAK- MISZEWSKA (Polish Consul General to the United States): If you will ask me if we have anti-Semitism in Poland and anti-Semites, I will say yes, of course, yes. But what is different now is that the younger generation of Poles is ready to confront our history. There is also some very new Polish attitude which is connected with being a free democratic country. There is something new in Polish mentality.

DAUM: I had seen signs of this new mentality among some of the young people I met trying to preserve Dzialoszyce's former Jewish cemetery.

UNIDENTIFIED MAN #1 (With Subtitles): When we were growing up, there was a playing area here. There was excavation, and everyone took soil from here. Mixed in we found human remains, bones, jaws, other parts. And that made us interested. 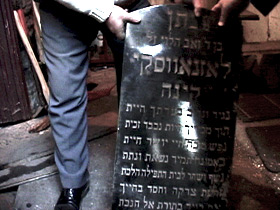 UNIDENTIFIED MAN #2 (With Subtitles): Last year we started to clean here at the foot of the cemetery and make some order. We cut the grass and bushes and found a piece of stone. It is a fragment of a tomb but has no Hebrew inscriptions.

DAUM: I saw another sign of this new mentality on my next visit to the cemetery, when the gentleman who lived across the street offered us an unexpected gift.

VOICE OF FEMALE TRANSLATOR (With Subtitles): Because you have taken such good care of these tombstones, their souls protect you and pray for you and your family.

UNIDENTIFIED MAN #3 (With Subtitles): I'll just be happy if they don't haunt me.

DAUM: To honor the memory of the Jews of Dzialoszyce, the principal of the high school and I invited the current residents to a concert exploring the music, the culture, and the history that Poles and Jews had once shared in this place.

MICHAEL ALPERT (Performer in Concert) (With Subtitles): How wonderful it would be if we all lived like brothers.

DAUM: In honor of this event, the teachers had prepared a photo exhibit of their town's long-suppressed Jewish history.

Ms. MAGDZIAK- MISZEWSKA: I deeply believe that the future of the Polish-Jewish dialogue is connected with history. But there is one requirement: that you know your history as it was, not as you would like it to be. 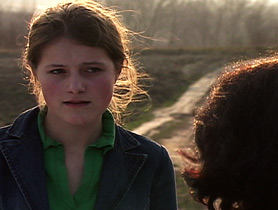 DAUM: To learn their history the way it was, some students in Dzialoszyce are now interviewing their older relatives who remember a time when Jews still lived here.

PAULINA GREBOSZ (High School Student) (Speaking to Unidentified Polish Woman) (With Subtitles): When you worked for the Jews, how did they treat you?

VOICE OF FEMALE TRANSLATOR (To Ms. Grebosz) (With Subtitles): Before interviewing your aunt and grandmother, what did you and your friends know about the history of the Jews?

Ms. GREBOSZ (With Subtitles): Nothing. Nearly nothing. My assumption was Poles and Jews only hated each other. Now I learn that they actually often got along with each other. 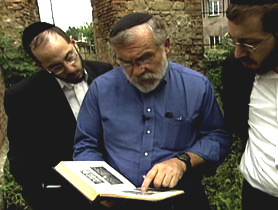 DAUM: I too grew up hearing only a one-sided version of Polish-Jewish history. I believe I would be doing a great disservice to my children and their children if that were all I passed on to them.

For their sake, as well as for their ancestors who last prayed here, I hope the first steps we've taken in Dzialoszyce will eventually bear fruit.

ABERNETHY: It's a daunting task Menachem Daum has undertaken -- trying to end interreligious hatred in a faraway town. But that's what he says he wants to do.

Before World War II, 80 percent of the residents Dzialoszyce were Jewish. Then came the Nazi Holocaust, and the few Jews who returned after the war were killed by Poles. Menachem Daum is a filmmaker, the son of Holocaust survivors, who grew up hearing stories about Polish anti-Semitism. Daum visited Dzialoszyce with his two sons to learn about the Jews who once lived there and anti-Semitism today.