BOB ABERNETHY, anchor: As the U.S. Senate prepares for hearings on the president’s nomination of Judge Samuel Alito to the Supreme Court, the court this week heard arguments on a major religious freedom case. At issue is whether a small church should be able to import a hallucinogenic tea it uses for worship, or whether the government should be able to prevent that as a danger to public health.

Tim O’Brien has the story. 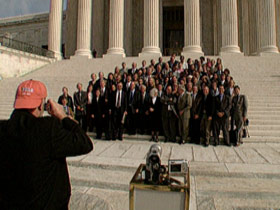 TIM O’BRIEN: No, this is not just another tour group visiting the Supreme Court. Meet the U.S. congregation of the União do Vegetal Church. With only 130 members, it is tiny. But religious leaders agree the impact of the case the church brought to the Supreme Court this week could be huge.

União do Vegetal, or UDV, originated in Brazil and has followers throughout South America. The faith blends Christian beliefs with tribal South American traditions. Central to the faith is receiving Communion through hoasca, a tea made from two plants unique to the Amazon rain forest. The tea contains a small amount of dimethyltryptamine — a hallucinogenic ingredient strictly controlled under federal drug laws. When UDV sought to import hoasca from Brazil, customs officials seized the tea and tried to block further imports. UDV took the government to court.

JEFFREY BRONFMAN (President, União do Vegetal Church, United States): We came before the Supreme Court of the United States today asking for the affirmation of a right already enjoyed by millions of other Americans — a right to simply be able to practice our religion without the threat of interference or imprisonment by the government. 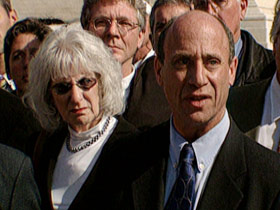 O’BRIEN: Sixteen years ago, the Supreme Court ruled that Oregon could prohibit Native American Indians from using peyote in their religious ceremonies. The court reasoned that Native Americans weren’t being singled out because of their religious beliefs — that the drug laws applied equally to everyone, and any burden on religion was only incidental.

That decision touched off a firestorm on Capitol Hill, and Congress quickly passed the Religious Freedom Restoration Act. The law requires [that] any government burden on religious freedom be justified by “a compelling governmental interest” and that the government must use the “least restrictive means.”

That is a very high hurdle, but one Justice Department lawyers told the Supreme Court this week it had met in blocking importation of hoasca. The ingredients in hoasca are dangerous even under medical supervision, they said, and the government has a compelling interest in protecting public health from any abuse. 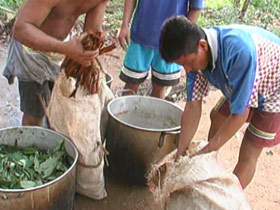 JOHN BOYD (Attorney, União do Vegetal Church): There’s no evidence of any health impact on any of the members. There has never been, and is unlikely to be, any risk of diversion to illicit use. It is simply these people wishing to be left alone, hurting no one, to practice their religion.

O’BRIEN: Boyd said there’s never been a commercial market for the bitter-tasting hoasca tea, distinguishing this case from future cases that might involve recreational drugs like marijuana and cocaine.

UDV has picked up some hefty support from a broad range of religious groups, including the U.S. Conference of Catholic Bishops, the National Association of Evangelicals, the American Jewish Committee, and the Baptist Joint Committee for Religious Liberty — all fearing the court may cut back on the protections of the federal law.

K. HOLLYN HOLLMAN (General Counsel, Baptist Joint Committee for Religious Liberty): We filed on behalf of the church at issue here, saying that the court should not accept the government’s position in this case — a position that would largely undercut this religious freedom statute that protects freedom of religion for all of us. 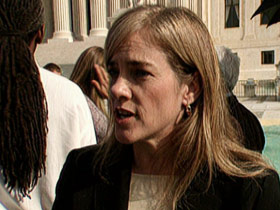 O’BRIEN: The justices appeared evenly divided, suggesting the case could turn, as religion cases so often do, on the vote of retiring Justice Sandra O’Connor.

It takes months to churn out the opinions in these cases, and if O’Connor is no longer on the court when the decision is announced, her vote would not count. Should her remaining colleagues split four to four, the court would likely order reargument of the case, requiring everyone to come back and try again next year.

ABERNETHY: Tim, I want to ask you about Judge Alito, the president’s nominee to replace Justice O’Connor. If he’s confirmed, he would bring the number of Catholics on the court to five.

O’BRIEN: That’s unprecedented. I don’t think it’s going to be an issue, however. It wasn’t with his nomination. I don’t think they’re going to take it into consideration in the hearings.

ABERNETHY: If he is confirmed, what difference would that make, do you think, on church-state decisions?

O’BRIEN: Well, we know that O’Connor was a swing justice on these issues, so he could make a significant difference. He’s followed the Supreme Court to the tee. He’s not spoken out for religious freedom. He’s not been a crusader. But what we do know about him generally is he’s very conservative and would likely make the court more tolerant of government involvement with religion.

ABERNETHY: Tim O’Brien, many thanks.