BOB ABERNETHY, anchor: A new report says this year Americans gave record amounts of private charitable donations. Another report says Americans donated nearly $3 billion to posthurricane relief efforts. That's more than the amount given after 9/11, but it's still not enough to meet the overwhelming needs of the devastated Gulf Coast. Kim Lawton has our story on how Christians there are looking for hope this Christmas season.

KIM LAWTON: In the French Quarter of New Orleans, they're trying to put on some Christmas cheer. But in nearby neighborhoods and, indeed, in communities for miles and miles in every direction, grim reminders that this Christmas is anything but normal. Nearly four months after Hurricane Katrina, the magnitude of the destruction is still difficult to comprehend. In the midst of it, many people here say the themes of Christmas are echoing in new and poignant ways. 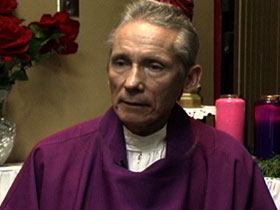 Reverend WILLIAM MAESTRI (Archdiocese of New Orleans): We will have in many ways a very different Christmas than we would have in times past. And in some ways, it will be a deeper Christmas, because we will see the things that really matter.

LAWTON: This is the time of year when churches typically are planning pageants and special services, but here they're still cleaning out mold and repairing damage or gutting their facilities. In Chalmette, Louisiana, east of New Orleans, flood waters rose to the roof of High Praise Fellowship. The Assemblies of God congregation lost virtually everything. Elder Herb Hellmers watched as workers piled the debris in front of the shell of his church.

HERB HELLMERS (Elder, High Praise Fellowship, Chalmette, Louisiana): It's hard to see just because, you know, you sit back and you remember what it was like and how we used -- how we used to teach Sunday morning class -- Sunday school.

LAWTON: The sanctuary used to seat 400. Now the congregation is scattered from Florida to Tennessee. The remnant is starting all over in the living room of the pastor's home 30 miles away. Still, Herb says, they are holding onto hope this Christmas.

Mr. HELLMERS: It's a joy and a peace in our hearts because, we're sorry, yeah, we lost this. But then, let's look for anticipation of what -- okay, God, High Praise Fellowship is going to be bigger and better in the future. 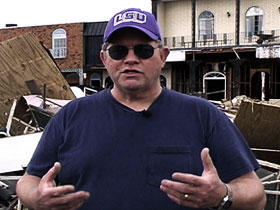 LAWTON: Before Katrina, St. Peter Claver was one of the most thriving African-American Catholic congregations in the country. Their historic sanctuary has been severely damaged, the pews and altar ruined, but the building itself can be salvaged.

In the meantime, they're holding Mass in the cafeteria of the church's school. St. Peter used to have more than 4,000 members at four different services. On the second Sunday of Advent, at the one and only service, 310 people attended, double the number from the week before.

It was the first Sunday back for Margie and Kenneth Sears, their children, and their brand new grandson, Phillip. The Sears family evacuated just before Katrina and lost their home when the storm hit.

MARGIE SEARS (Member, St. Peter Claver Roman Catholic Church, New Orleans): We started off in Baton Rouge, where we did not find housing or help. We went to Lafayette. Again, we had trouble finding houses. We ended up in Dallas, maybe a week after the storm. But we wanted to be here back in New Orleans.

LAWTON: Margie's daughter Courtney gave birth to Phillip away from home. She says she saw new parallels with the Christmas story.

COURTNEY SEARS (Member, St. Peter Claver Roman Catholic Church): No room in the inn -- yes, I did. He is my little miracle baby.

LAWTON: The Sears are now living in a FEMA-provided trailer, hoping to rebuild somewhere, someday. Margie says this Christmas, their greatest gift is knowing they all survived. 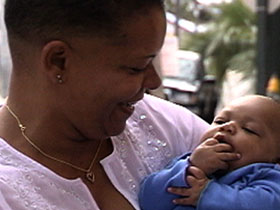 LAWTON: Across the region, families like the Searses are exiled from their homes. Father William Maestri from the Archdiocese of New Orleans says they are finding new meaning in the Advent season readings from the Book of Isaiah.

Rev. MAESTRI: Israel was a people that was dispossessed. They were in exile. And yet in the midst of that, the prophet could say, "Thus says the Lord. Bring comfort, comfort to my people." Whether it's a spoken word, a prayer, a touch. Whether it's supplying someone's need with food, clothing, shelter. In so many ways, this is the way we bring God's comfort to others.

LAWTON: Faith-based groups have continued doing just that, often in the midst of their own needs. The Pastors' Resource Council began organizing relief efforts immediately after the hurricane. Since then, they say more than 10,000 church-based volunteers from all over the country have helped almost 2 million people. At disaster relief centers like this one, they've handed out more than 17,000 tons of food, water, and other supplies.

Church volunteers are still coming in from out of state to support those efforts. Mark Dronfield was part of a group from Cherrydale Baptist Church in Arlington, Virginia. He says he took a week off of work to help out because he wanted to demonstrate God's love.

MARK DRONFIELD (Member, Cherrydale Baptist Church, Arlington, Virginia): These folks -- when you come through, they think that, you know, three months later, there's nothing left. We've been abandoned. Nobody else is here, you know? And, you know, I think of God and the way he looks at it. You know, he hasn't abandoned them.

LAWTON: That means a lot to people like Edward Williams, who came to the relief center looking for someone to help him as he tries to clean out his house. The storm surge went over his roof, and he believes his entire home was inundated for more than a week. The receding waters left behind a muddy, mildewed coating of sludge over everything. Even after he gets the place cleaned out, Edward doesn't know if he'll have to tear it down and, if so, whether he'll rebuild.

LAWTON: In Slidell, across Lake Pontchartrain, the First Baptist Church is once again holding services in its damaged building. But after church they set up cots in the sanctuary so volunteers have a place to sleep. Among the volunteer workers this week, a group from the Falls Church, an Episcopal congregation in northern Virginia. They saw it as a way to live out their faith.

Reverend RAMSEY GILCHRIST (The Falls Church, Falls Church, Virginia): It's really so simple. It's about loving God, loving others, and helping the people who need help. 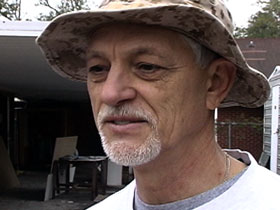 LEN SKILES (Member, The Falls Church, Falls Church, Virginia): This is a time to be able to really live out the Christmas season by giving.

LAWTON: On this day, they were helping to repair a day-care facility for mentally disabled adults. The program's director, Diane Baham, says she's been inspired by the generosity.

DIANE BAHAM (First Baptist Church, Slidell, Louisiana): I have watched on TV when other areas of our country were affected, and I would think, "Oh those poor people." And it never occurred to me to get in my car or get on a plane and fly to them and help them.

LAWTON: But the help is also taking its toll. In Baton Rouge, the Reverend Gregory White and the Beech Grove Baptist Church adopted the evacuees who were placed in the nearby Pines Motel. His congregation of about 200 prepared two meals a day, every day, for 300 people.

Reverend GREGORY WHITE (Beech Grove Baptist Church, Baton Rouge, Louisiana): We did it out of faith. We didn't have nobody giving us large sums of money. It was about -- there was a need, and being people of faith, the children of God, it was our call. 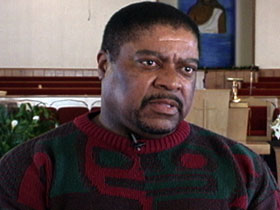 LAWTON: But they stopped after Thanksgiving. They were running out of money, and his people were getting burned out.

Rev. WHITE: Sometimes you just have to know where to stop. It's not easy.

LAWTON: White and his church are looking for ways to develop and finance a longer-term ministry, particularly in a local park of more than 600 displaced families who are now living in FEMA trailers. White says the spiritual needs there are great.

Rev. WHITE: They're looking for hope. In the beginning, there [was] FEMA assistance, $2,000 here, a little money there. They were excited to receive that, but now the reality is setting in. I think there are many folks that are more traumatized now than from the beginning.

Ms. BAHAM: I think there's a lot of people just going through the motions right now. They're probably making you think things are better than they really are, because you want to keep that hope up. But inside people are crushed, and they're really hurting.

LAWTON: Church leaders say that makes the Christmas messages of hope, joy, and peace more relevant than ever.

Rev. WHITE: The rest of the world says, "How can you have joy? How can you have peace? How can you sing these songs about Christmas after all we went through?" And sometimes I say, "Well, we don't have all the answers. But the one thing that we know we have is assurance that God will gives that peace, that inner peace."

Rev. MAESTRI: Perhaps this Christmas, more than any other in memory, is an important one because it is a season of hope. And, really, what we need to move forward is hope.

A new report says this year Americans gave record amounts of private charitable donations. Another report says Americans donated nearly $3 billion to post-hurricane relief efforts. Yet nearly four months after Hurricane Katrina, the magnitude of the destruction is still difficult to comprehend. In the midst of it, many people here say the themes of Christmas are echoing in new and poignant ways.