BOB ABERNETHY, anchor: President Bush marked the third anniversary of the invasion of Iraq by defending his decision to start the war and how it’s been waged. He explained his position to an audience in Cleveland:

President GEORGE W. BUSH: My most important job is to protect the American people. Therefore, when we see threats, given the lesson of September 11, we got to deal with them. 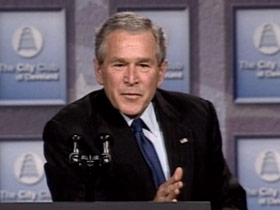 ABERNETHY: But deal with them how? What was the moral basis for invading Iraq? When it comes to war, a few people — pacifists, such as the Christian Peacemaker Teams — say never. Others say it all depends on practical, hard-nosed national interest and whether the benefits outweigh the costs, such as President Bush’s doctrine justifying preventive war. Meanwhile, consciously or not, most of us probably weigh the morality of war using centuries-old just war theory. This week, Kim Lawton reinterviewed some of the men and women we spoke with in 2003 and others about whether the Iraq invasion was just, and how the U.S. could now, morally, get out.

KIM LAWTON: At the Roman Catholic Sacred Heart University in Fairfield, Connecticut, Professor Brian Stiltner teaches a course on faith and justice. Today, his class is discussing what constitutes a just war and whether the Iraq war qualifies.

Professor BRIAN STILTNER (Associate Professor, Religious Studies, Sacred Heart University) (To Class): Do you think it was the right thing to do?

UNIDENTIFIED FEMALE STUDENT #1: We went in with the wrong intentions, and us being there now, it’s just — it’s making the situation worse.

UNIDENTIFIED FEMALE STUDENT #2: I think we are in there for a good purpose, like, something is getting done even though it is taking, like, a long time. 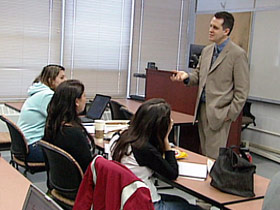 LAWTON: The answers aren’t always easy, which Stiltner knows all too well.

Prof. STILTNER: I personally took an ethical position in favor of the war at the beginning, but have since had serious misgivings and think it was ethically not justified. But I’ve been wrestling with those issues. I think part of ethics is wrestling. It’s really appropriate with this complex war and long engagement to keep looking back at what we knew then, what we know now, and asking whether we’d have made the same decisions.

LAWTON: Three years after the U.S.-led invasion of Iraq, theologians and ethicists are assessing whether the military action was, indeed, morally justified. They’re debating if a preemptive war can be a just war, and what ethical principles should guide the decision to leave Iraq.

The widely accepted moral framework for the discussion is the just war tradition — a set of teachings that began with Saint Augustine in the 4th century and were further developed by Saint Thomas Aquinas in the 13th century. The tradition says in order for a war to be just: there must be a just cause; it must be declared by the proper government authority; there must be a right intention and a probability of success. War must be a last resort, and the means used should be proportional to the desired ends. 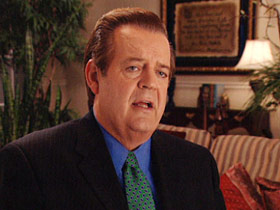 Dr. Richard Land heads the Ethics and Religious Liberty Commission of the Southern Baptist Convention. In September 2002, he told this program he believed an attack against Iraq would be justified under the criteria for a just war. He stands by that today.

Dr. RICHARD LAND (President, Southern Baptist Convention Ethics and Religious Liberty Commission): You have to have a just cause. Our cause was not to conquer Iraq, but to liberate it. It was to defend ourselves and our allies from the possibilities of future attacks from a man who has shown a willingness to cooperate with and to train tens of thousands of terrorists and to give them safe harbor.

LAWTON: Land says the benefits being achieved outweigh the destruction being caused. 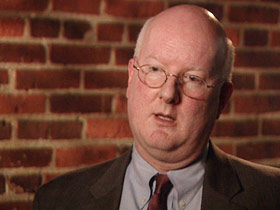 LAWTON: Also on our September 2002 program, Professor Shaun Casey of Wesley Theological Seminary disagreed with Land. He says the facts have confirmed his position.

Dr. SHAUN CASEY (Professor of Christian Ethics, Wesley Theological Seminary): They said our cause was just. And they argued under a global war on terrorism that there were weapons of mass destruction, that there were links to terrorism, which we now know are not true. The president never made a full-blown case in the categories of the just war ethic to justify this invasion.

LAWTON: Casey says the just war teaching that force should be a last resort was widely ignored.

Dr. CASEY: Last resort says if you have any peaceable avenues to pursue that might be fruitful, you have to try those avenues and exhaust them first, and clearly that was not the case in our invasion of Iraq.

LAWTON: William Galston is a senior fellow at the Brookings Institution in Washington. Three years ago, he was also among those arguing that the war wasn’t morally justified. Now, he worries about its long-term moral impact. 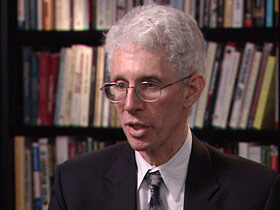 LAWTON: Professor Stiltner initially supported the invasion as morally acceptable because the just war ethic does allow for the use of force in the face of a grave and imminent threat. Weapons of mass destruction in the hands of Saddam Hussein, he believed, was such a threat.

Prof. STILTNER: We can all see now in retrospect that the war wouldn’t have been necessary to protect us from any kind of substantial weapons program, any kind of imminent use.

Dr. JEAN BETHKE ELSHTAIN (Ethicist, University of Chicago Divinity School): For me, the fact that WMDs haven’t been found is not a trump card that obliterates all the other moral and ethical considerations that I think we need to keep in the mix as we talk about this. 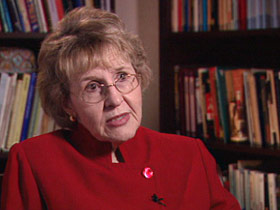 LAWTON: She says the just war theory permits the use of force to stop massive human rights abuses, and she believes the situation in Iraq under Saddam Hussein met that standard.

Dr. ELSHTAIN: What we loosely call humanitarian intervention. In the classic just war teaching, it’s protecting the innocent from certain harm. The data on what was going on in Iraq was horrid and overwhelming.

LAWTON: Elshtain admits the number of U.S. troops and Iraqi civilians killed since the war began has been what she calls “a terrible cost.” She still believes proportional good has been achieved but says she will reassess that if the situation doesn’t stabilize.

Dr. ELSHTAIN: If you go through the upheavals of a war and what you wind up with is some kind of civil war that goes on without end, then you could look back and say this really, this was likely a mistake. And if that happens, it will have been a mistake in judgment on my part and a lot of other people’s. 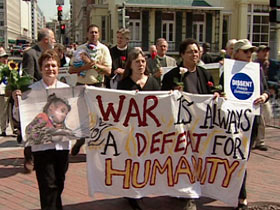 LAWTON: The Bush administration has embraced what it calls a strategy of preemptive war. This has prompted vigorous ethical debate. Galston says there is an important distinction between a preemptive war against an imminent threat and a preventive war, which he believes was the case with Iraq.

Dr. GALSTON: There is very little theory or modern moral argument that supports a preventive war, when the threat is more distant in time and more speculative.

Dr. ELSHTAIN: If you accept, as part of the just war tradition, sparing the innocent from certain harm, that means you have got to act before that harm comes. And that means prevention in certain situations.

Dr. LAND: The people who died in the twin towers on 9/11 and their family members would probably say that the pre-9/11 definitions of when preemptive force would be justified need to be expanded, and I would agree with them.

Dr. CASEY: Imagine a world where the threat or the enmity between two nations was, in fact, just cause — the hypothesis that they might be dangerous to me. If that becomes a warrant for preemptive or preventive war, then the entire globe becomes a bloody sea of chaos.

LAWTON: The just war ethic says less about how to end a conflict and what to do afterward. Elshtain believes the principles need to be expanded to include ideas about what she calls a “just occupation” that leads to a peaceful, ordered society. 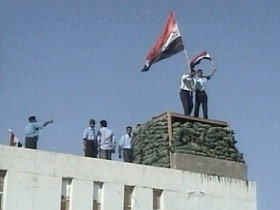 Dr. ELSHTAIN: I think that’s our obligation as an occupying power, is to do our very best to see if we can leave Iraq with something like that working, knowing that finally, to sustain it is not going to be our job over the long run. That has to be their job.

Dr. CASEY: I think that the ethic says that you have to minimize your footprint there. And you want to get out as soon as you can, whenever you intervene.

Dr. LAND: The Iraqis believe it was worth it. They are dying, standing up and being willing to die for their country every day. And I believe we have a moral obligation to stand with them until they can defend themselves.

LAWTON: The just war ethic has been a moral template for more than a thousand years. But using it to weigh the facts on the ground is always complicated.

Dr. ELSHTAIN: It’s not like having a tick list and you say, okay, tick, tick, tick, adds up to this, home free, you know, and you just leave it behind. You have to ongoingly be in the process of making judgments and assessments.

Dr. GALSTON: You always sort of cross your fingers, hold your breath, and say a prayer when you’re bringing these moral arguments to bear on issues as grave as war and peace.