BOB FAW: On the playground, at recess, six-year-old Benjamin Allard couldn't be happier. And in Mrs. Logan's kindergarten class in Franklin, Massachusetts - with his circles and colors - Benjamin also flourishes.

UNIDENTIFIED TEACHER (to Benjamin): What are you going to take? 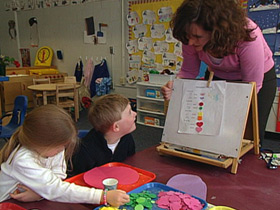 FAW: Even though Benjamin has Down Syndrome.

BETH ALLARD: Just like any other child, you give him an opportunity and work with them and they can do whatever they aspire to do.

FAW (to Ms. Allard): Even if they're different?

FAW: Now Beth Allard marvels at her son. But when she remembers what her pediatrician told her when she was pregnant at 36, she can only shudder.

Ms. ALLARD: She said, "I just want to let you know what your life's going to be like. He's going to make your life hell. He won't be able to read or write or do anything. He may not be able to speak." The reason I considered terminating the pregnancy was, well my doctor's telling me this. And I don't know much about it so maybe she's right and I really need to do this.

FAW: Largely because of her Catholic faith, Beth Allard decided to continue her pregnancy.

ELLEN WIXTED (talking to husband): My concern is that if I do that..

FAW: Seven years ago, faced with the prospect of giving birth to a child with Down Syndrome and heart defects that often afflict those infants, Ellen Wixted, 35, chose to abort her baby. 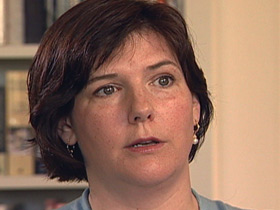 FAW: Now, with two children born later, Ellen Wixted says that that decision to abort haunts her as much today as it tormented her then.

Ms. WIXTED: It was hard to get out of bed in the morning. It was hard to - it was hard to function at all, really. And, you know, my husband is incredibly supportive and it was still the hardest thing I think I've ever gone through.

FAW: Two women and two different responses to Down Syndrome - a genetic abnormality in which an extra chromosome generally results in mild or moderate retardation and other health problems.

Ms. ALLARD (to Benjamin): How about this foot over here? Bend that knee.

FAW: Every year 5,000 babies are born with the defect, many to older women. Recently, using ultrasound and blood tests doctors developed a new technique to identify the condition in the first trimester. Advocates for the disabled, however, worry that the test - administered before some feel human life has fully begun - will be used to abort more Down Syndrome babies.

BEVERLY BECKHAM (Newspaper Columnist): What troubles me is this first trimester test just is like a missile that targets children with Down Syndrome. So what if other children aren't born with Down Syndrome and then maybe Lucy will be an endangered species.

FAW: The light of Beverly Beckham's life in Canton, Massachusetts is her two-year old, granddaughter, Lucy. Her "Lulu Belle," who has Down Syndrome. 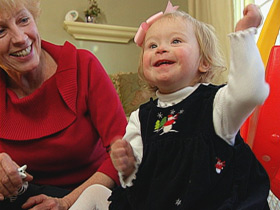 Fifty years ago, children with Down Syndrome were labeled "mongoloid."

(to Ms. Beckham): Years ago we would institutionalize kids like this?

Ms. BECKHAM: Right. And now we kill them. I think that all of this money spent trying to find them and eliminate them would be far better spent trying to educate and take care, provide.

FAW: In one sense, Lucy's birth was unusual. Doctors estimate that when faced with the prospect of giving birth to a child with Down Syndrome, 80 percent of mothers choose to terminate their pregnancies.

UNIDENTIFIED DOCTOR (to child): Should we do some colors?

FAW: This clinic at Children's Hospital Boston provides early intervention for children with Down Syndrome. It's director, Dr. Allen Crocker, is troubled that so many women choose not to give birth to babies with the condition.

Dr. ALLEN CROCKER (Senior Associate in Medicine, General Pediatrics, Children's Hospital, Boston): There is a broad failure to understand the meaning of this kind of special person. I see joy, both in myself and in them. And when I look - stand back and look at the larger scene - we are all the richer for having a diverse society.

FAW: Reich says expectant mothers worry about the cost of raising a Down Syndrome child - about how that child will affect siblings, and mostly how the child will cope.

Prof. REICH: And, the older parent feels that - worries - "Who's going to take care of that child, when I am not here anymore?" I think, you know, we think of our society - we're very fast moving - how is this child going to get along in this society? 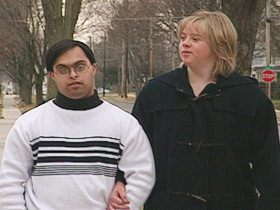 FAW: Adults with Down Syndrome may surprise us, but not themselves. Twenty-four-year-old Sujeet Desai in Rome, New York, is an accomplished musician who gives concerts and lectures. And 29-year old Carrie Bergeron has a gift, working with small children. Both Carrie and Sujeet have Down Syndrome. This summer, they plan to get married.

SUJEET DESAI (to Ms. Bergeron): To us.

CARRIE BERGERON (to Mr. Desai): To us. Cheers.

I just wanted to tell everybody else who has Down Syndrome and special needs that they can have dreams and they can accomplish their dreams in any way they can.

FAW: Carrie and Sujeet are lucky -- they benefit from a state program which provides housing and special assistance. Many states don't offer that kind of support. But they insist their so-called "handicap" is in the way we look at them - not in who they are.

Ms. BERGERON: I don't think it's a handicap. It's just that we are special no matter what we are, because we are a person first.

FAW: Special and different. Like most people with Down Syndrome, six-year-old Benjamin Allard knows he is not like everybody else.

Ms. ALLARD: He gets himself ready in the morning and he came downstairs and I said to him, "Oh, look at you! You look so handsome today!" And he said, "Mommy, I'm not handsome, I'm different." And that - that broke my heart.

FAW: Physically they are different too. When just two months old, Lucy had to have open-heart surgery. Carrie has had heart and respiratory problems. In 1983, the life expectancy of someone with Down Syndrome was just 25. Now it is 56.

Dr. BRIAN SKOTKO (Harvard Medical School): There are some who have more challenges in school than others. They might need extra support in the classroom. And what research is showing that when that support is provided, they're excelling.

FAW: Dr. Brian Skotko, who surveyed more than 1,000 pregnant women given prenatal tests, concluded many doctors are insensitive - ignorant about Down Syndrome - and the potential of those born with the defect. Dr. Skokto's fear and the fear of others is not that those prenatal tests will reveal genetic abnormalities. The fear is that those tests will be used to "search and destroy" those with disabilities. 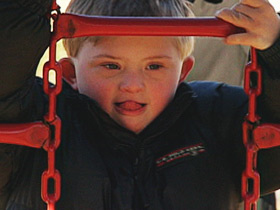 Ms. BECKHAM: Society is saying everybody has to be perfect. I don't believe that you can test away everything - you can test away all of the things that make life hard. I think that women aren't given a real indication of how not horrible this is.

FAW: For now though, women will continue to agonize on bringing into the world, a child like Benjamin. Or, as Ellen Wixted did, deciding not to.

Ms. WIXTED: I wouldn't have done it differently. And, I am no more morally at ease with that now then I was then. I would make the same decision and I would feel equally awful about it.

FAW: A choice with consequences - then and now.

(to Ms. Allard): Do you ever just shake your head and think you did come close to losing him?

Ms. ALLARD: I can't even think about it. Yeah. 'Cause I just - I can't imagine life without him.

FAW: Born with an old abnormality, which some are now starting to see differently.

Expanding medical technologies continue to create a host of new ethical dilemmas. Researchers can now detect early in a pregnancy if a fetus has Down Syndrome. The condition usually results in some degree of physical and mental disability, and armed with that information, some expectant parents face the wrenching decision of whether to terminate the pregnancy.