BOB ABERNETHY: Several recent best-selling books have sharpened the old debate between some scientists and some religionists over creation, evolution and, among other issues, stem cell research.

We want to re-run today a story we carried this past summer about a man who is both a research scientist and an evangelical Christian, and sees no conflict between the two fields. He is Dr. Francis Collins, who led the massive effort to discover the human genetic code. His book is called “The Language of God.”

From the National Institutes of Health, just outside Washington, Francis Collins led an international team that deciphered most of the human genetic code by the year 2000. 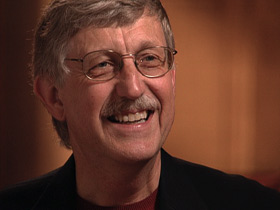 Dr. FRANCIS COLLINS (Director, National Human Genome Research Institute, National Institutes of Health and Author, THE LANGUAGE OF GOD): The Human Genome Project was this audacious, absolutely unheard of, ambitious effort to read out all of the letters of the human DNA code, all three billion of them — an enormously challenging problem. And yet, over those next 13 years, we finished the job early, two years ahead of schedule and actually under budget, which surprised everybody, especially in Washington, D.C.

ABERNETHY: When President Clinton announced the achievement, Collins spoke about it both as a scientist and as a man of religious faith.

Dr. COLLINS (at Press Conference): It is humbling for me and awe-inspiring to realize that we have caught the first glimpse of our own instruction book, previously known only to God.

ABERNETHY: Collins describes the decoding, for him, as both a great scientific experience and an experience of worship. Now Collins says the new knowledge of how genes work, and in disease how they sometimes don’t work, is beginning to revolutionize the practice of medicine. Already, a drug based on genetic understanding is controlling adult leukemia, and…

Dr. COLLINS: Cancer is very much at the front end, because cancer is a genetic disease. 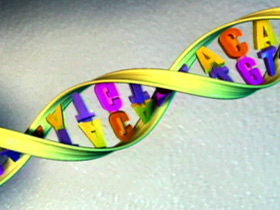 It comes about because of mistakes in DNA. So there are dozens of drugs now in clinical trials that are based on understanding the cancer genome. And they won’t all work, but some of them will.

ABERNETHY: Not far behind, says Collins, is the development of drugs for Alzheimer’s and Lou Gehrig’s disease, asthma and diabetes. Collins is also a strong supporter of stem cell research, and he thinks there’s a way to do this that, for him, removes the moral objections to destroying a human embryo. Collins favors what’s called somatic cell nuclear transfer, in which the nucleus of an egg is replaced by the nucleus of, for instance, a cell of skin.

ABERNETHY: Meanwhile, as grateful as Collins is for the healing his work will make possible, he’s troubled by its contribution to the battle between some believers and most scientists over evolution — what Collins calls the “flash point” between science and faith.

Dr. COLLINS: What I want to say about this I also want to say with great love and understanding for my fellow believers, who have a different view. But for me as a scientist, when I look at DNA — our own, that of the human species — the evidence that we are all descended from a common ancestor is overwhelming. Some might wish that not to be so. It is so. Does this conflict with Genesis 1 and 2? I don’t believe it does. 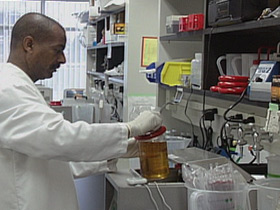 ABERNETHY: The genetic code, says Collins, supports other evidence that human beings evolved from about 10,000 “founders” between 100-150,000 years ago, probably in East Africa.

Dr. COLLINS: One of my greatest heartaches is that at the present time serious believers, [who] believe that they have to defend a literal interpretation of Genesis in order to defend their faith, find themselves contradicting facts that God Almighty has given us the ability to discover.

ABERNETHY: For Collins, a supernatural God created human beings through the natural processes of evolution, and for religious believers to deny that is to invite ridicule of their faith.

ABERNETHY: But what about the theory of intelligent design, the argument dividing school boards around the country over whether life is so complex the theory of evolution can not explain it, thus there had to have been a designer?

Dr. COLLINS: Intelligent design, while a thoughtful, well-argued perspective, I do not think is taking us to the Promised Land. 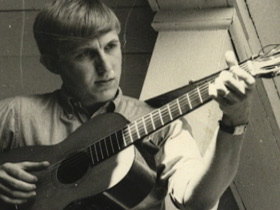 I think this will be an argument which ultimately will not do damage to science; it will do damage to faith. The problem is the examples that intelligent design puts forward we are learning a lot about. And the notion that those are examples of irreducible complexity is showing serious cracks.

ABERNETHY: As a child and young man, once a lanky guitar-playing college student, Collins was not religious.

Dr. COLLINS: And when I got to graduate school studying physics and chemistry and mathematics I became an atheist, and a fairly obnoxious one at that. Everything, in my mind, could be reduced to second-order differential equations. That’s all that mattered.

ABERNETHY: But then Collins discovered C.S. Lewis, especially his book MERE CHRISTIANITY, and not long after he became a Christian. At a recent conference on Lewis, Collins spoke of the painful conflict for many students raised to believe the Genesis creation story is literally true.

Dr. COLLINS (conference on C.S. Lewis, to audience): It breaks my heart to see young people raised in Christian homes who are told that they have to believe that perspective or their faith is in doubt or they’re somehow betraying God Almighty. And then faced with the facts that science tells us about the age of the earth, what a terrible quandary they’re placed into. Do they reject their faith? Do they reject science? 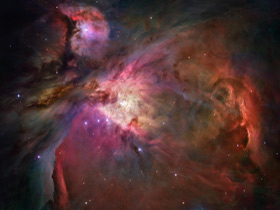 ABERNETHY: As Collins sees creation, the Big Bang reveals that the universe had a beginning — about 15 billion years ago — and the fundamental laws of the universe, what Collins calls “constants,” suggest an intention for life.

Dr. COLLINS: One does have to wonder: Did the universe know we were coming or did God, who created the universe, choose those constants just so?

ABERNETHY: Like C.S. Lewis, Collins finds evidence for God in the universal sense of right and wrong and in humanity’s longing for something beyond itself.

Dr. COLLINS: If God who is outside space and time chose to create a universe and populate it with creatures in his image with whom he could have fellowship, who are we to say that the process that we as scientists have uncovered — the Big Bang, the formation of stars and planets and the mechanism of evolution to create life and ultimately human life — is not the way we would have done it? It’s an incredibly elegant, remarkably beautiful way to conduct that marvelous act of creation. Nothing that I know as a scientist is in contradiction to that. Nothing that I know as a believer is in contradiction to that. 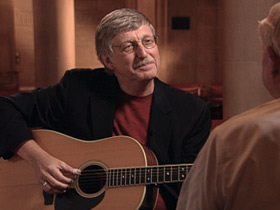 ABERNETHY: Meanwhile, Collins notes that 45 percent of Americans tell pollsters they believe the Genesis account of creation, not Darwin’s and Collins’s, and he fears increasing polarization between science and some believers.

Dr. COLLINS: Neither of those outcomes will be good for us in the long term. We need science if we’re going to survive in a complicated world and if we’re going to treat terrible diseases that cry out for some form of alleviation. And we need faith if we’re going to keep ourselves in perspective. So we must seek out the ways in which these worldviews can happily coexist. It’s perhaps our strongest mandate right now, if we’re really concerned about our own future in this world.

ABERNETHY: While the battle of worldviews continues, Collins finds comfort in music, and he brought his guitar to our interview.

Dr. COLLINS (Playing guitar and singing hymn): “When I survey the wondrous cross, on which the Prince of Glory died, my richest gain I count but loss, and pour contempt on all my pride.”