BOB ABERNETHY, anchor: Now, the conflict between Sunnis and Shiites. It goes back nearly 1,400 years. Today it is tearing Iraq apart. But the two branches of Islam have not always been openly hostile, and in many parts of the world they live together peacefully. In fact, the sectarian violence in Iraq took many by surprise. Lucky Severson talked with a prominent Middle East scholar about the rivalry's history, and why it has exploded recently, and what the prospects are for the future.

LUCKY SEVERSON: It's become the menu of daily life in Iraq -- Sunnis killing Shiites in markets and mosques and holy sites, and Shiites retaliating, murdering Sunnis. The level of sectarian violence has grown dangerously close to an all-out civil war. Now there's a view gaining a toehold in Washington that we should we have seen it coming. That's the central message of an influential new book called THE SHIA REVIVAL by Middle East scholar Vali Nasr.

Dr. VALI NASR (Professor, Naval Postgraduate School and Author, THE SHIA REVIVAL): It goes to the very beginning. When the Prophet Muhammad died, there was a dispute over who should be his successor. The Sunnis gathered as a community and chose the most trusted, the best among them as what came to be known as a caliph; whereas the Shiites, particularly over time, would dispute that method of choosing a successor, believing that the Prophet had a spiritual charisma -- he was the chosen of God -- and that charisma went through his bloodline. They always looked at these imams, as they are called, as the true leaders of the community and believed that the Sunnis had erred by not following the progeny of the Prophet. 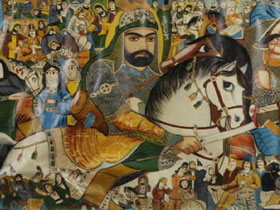 SEVERSON: Nasr, who is a professor at the Naval Postgraduate School, says the U.S. invasion of Iraq tipped the fragile balance of power between Sunnis and Shiites who have a history of violence dating back almost 1,400 years.

Dr. NASR: Shiites, in particular, have a history of persecution, because they were the underdogs. They lost to the Sunnis early on. Their various saints were killed, and most important of them was the Prophet's grandson by the name of Hussein, who was killed at the battle of Karbala. And the brutal way in which he was killed essentially galvanized Shiism. In fact, Hussein's martyrdom is much like the crucifixion of Christ.

SEVERSON: Nasr describes Shiism as very Catholic-like, recognizing some imams as saints, also as intermediaries between man and God, and he says Shiites are much more passionate about rituals, like this one called "Ashura," which commemorates the martyrdom of Hussein at Karbala.

Dr. NASR: It is a dramatic event in which large numbers of people gather. They cry, they sing eulogies for Hussein, they beat their chests, sometimes they draw blood, and they go into a frenzy. Now in Iraq it was forbidden, because Ashura has the quality of not only affirming Shia identity, which Saddam did not want to happen, but it brings large numbers of Shiites together in a state of passion frenzy. So the very first impact of American presence in Iraq -- you had two million people showing up in Karbala performing something they hadn't been allowed to for some time. That cultural freedom then translated into political power when they began to vote and identify as one community.

SEVERSON: Under Saddam, the Sunnis ruled Iraq, even though they were the minority. But throughout the world, Sunnis vastly outnumber Shiites. There are approximately 1.3 billion Muslims, and only about 15 percent are Shiites. But Shia are the majority in Iraq and the overwhelming majority in Iran, which the Ayatollah Khomeini transformed from a secular state into an Islamic one when his followers overthrew the Shah in 1979. Nasr says Khomeini claimed to be the supreme leader of all Muslims.

Dr. NASR: The more Khomeini tried to say that he is the Islamic leader, the more Saudi Arabia and their allies in the rest of the Muslim world began to say, "No, no, no, you're a Shia." 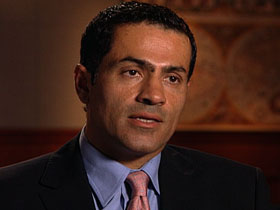 SEVERSON: Professor Nasr says in addition to Saudi Arabia, other Middle Eastern countries like Jordan and Egypt are worried that the U.S. invasion of Iraq has emboldened Shias not only in Iraq, but in Iran as well.

(to Dr. Nasr): How important to the future of Iraq is Iran?

Dr. NASR: Enormously at this point, because Iraq is currently extremely unstable, and the Shia community of Iraq, so long as they feel enormous amount of insecurity towards the U.S. intentions and towards coexistence with Sunnis, are likely to look at Iran as an ally, as a patron. And Iranians similarly are extremely concerned about what the outcome in Iraq will be.

SEVERSON: During the U.S. occupation the insurgency was fueled by the Sunnis' fear of Shia domination. It was the Sunnis who dispatched suicide bombers to Shiite neighborhoods. But ironically it was the Shiites who historically deployed martyrs to attack their enemies. It was a practice Iran's Khomeini refined after his followers deposed the Shah.

Dr. NASR: The Iranian regime of Ayatollah Khomeini openly tried to use this veneration for martyrs, dying for the faith, in service of protecting the Islamic Republic. And Iran did so in particular during the Iran-Iraq war, where large number of Iranian youth basically used their bodies to defeat Iraqi armor because Iran did not have enough war material.

SEVERSON: It was war in Lebanon in the early 1980s that marked the beginning of the use of suicide bombers as a method of war. Hezbollah suicide bombers killed almost 600 Israeli soldiers, which eventually led to their pullout from southern Lebanon. They also bombed the U.S. Marine barracks in Beirut and killed 241.

Dr. NASR: At that time, everybody thought that martyrdom is the monopoly of Shiites, that the Sunnis would never do it. But gradually Arab sort of radical Sunni groups, Palestinians as well as Al Qaeda, came to a theological shift to embrace what they had seen in Hezbollah and make it their own. We saw that they actually adopted the things the Shiites do at the very time that the Shiites stopped using it.

SEVERSON: Nasr says the Shiites' reluctance to turn to violence in Iraq was greatly influenced by the revered Ayatollah Ali al-Sistani. 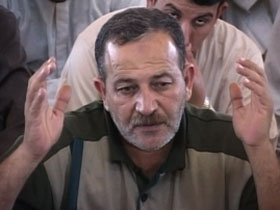 Dr. NASR: He very early on understood that this is a historical opportunity for Shiites to assume control of Iraq, and elections, democracy, one-man/one-vote benefits them, and they should not embrace violence. They should embrace the political process. But as the Sunni violence against the Shiites escalated, as Shiites died in marketplaces and were assassinated, he began to lose authority. So, you know, the Shiites began to assassinate, torture, kill, kidnap and attack Sunnis as well. And Sistani continues to call for calm, but his voice is fainter than it was two years ago.

SEVERSON: The leader whose voice is growing louder is the young firebrand Muqtada al-Sadr, not highly regarded as a religious leader, but he has a strong militia and close ties to government.

Dr. NASR: He was never a good seminary student, never finished his work, used to play a lot of video games when he was a youth. But in some ways he has surprised a lot of people, because not only has he survived, he has gained in power, and he's proven himself to be politically savvy.

SEVERSON: Nasr says one of the most significant and unintended results of the invasion of Iraq was the empowering of neighboring Shiite Iran, whose leaders use the Shiite belief in messianism for their own political gain.

Dr. NASR: There is the expectation of a second coming of the 12th imam, and therefore the Iranian regime under Ayatollah Khomeini, and even it is doing it today under the present Ahmadinejad -- uses this popular level, folk-level attachment to the myth of second coming in order to mobilize the population for various political or military activities.

SEVERSON: Military activities, Nasr says, such as the most recent war with Israel in Lebanon, a war that greatly increased the stature of the Iranian-funded Hezbollah, at the same time bolstering the influence of Iran as a major player in the Middle East -- a state of affairs that causes considerable angst among Sunnis in the region who fear that Iran is building a nuclear bomb.

Dr. NASR: The lesson of Hezbollah's showing in Lebanon is to also show that the Shiites have the ability to be a regional power. They are the ones who have the, you know, capability or courage to take on the Israelis, not the Sunnis. It doesn't hurt this attitude in the Arab world that Iran also happens to be the most powerful country in the region right now.

SEVERSON: Nasr thinks the sectarian violence is moving toward an all-out civil war. 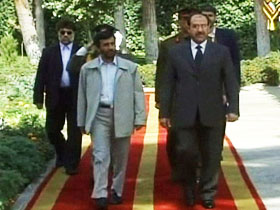 Dr. NASR: There is not sufficient force on the ground to forcibly separate them out and impose peace on them by force. And, you know, the scale of killing, the ways in which communities are being cleansed on both sides is all suggestive that you're having -- essentially both sides are posturing for what might be a final showdown.

SEVERSON: What is needed, he contends, more than anything is diplomacy -- for the U.S. to talk to countries it now has no diplomatic ties with, namely Iran and Syria.

Dr. NASR: Now engaging Iran or Syria does not mean recognizing them. It does not mean accepting their regimes. It means, rather, that you open a door to be able to talk about some basic concerns of the U.S. It's like the way we dealt with the Soviet Union. Ronald Reagan could call the Soviet Union an evil empire and yet meet with Mikhail Gorbachev and try to push for U.S. interests.

SEVERSON: The sectarian violence in Iraq continues unabated. Not everyone in the Bush administration agrees with Professor Nasr's views, but he was invited to meet with Secretary of State Condoleeza Rice and the president.

The conflict between Sunnis and Shiites goes back nearly 1,400 years and today, it is tearing Iraq apart. But the two branches of Islam have not always been openly hostile, and in many parts of the world they live together peacefully.