BOB ABERNETHY, anchor: Now a look at some of the new criticism of religion. According to PUBLISHERS WEEKLY magazine, last month’s list of the top ten bestselling books relating to religion was led by two books by atheists: Richard Dawkins and Sam Harris. Betty Rollin reports today on them and other outspoken atheists, beginning with Julia Sweeney and her off-Broadway performance, “Letting Go of God.”

JULIA SWEENEY (Actress-Comedian, during performance of “Letting Go of God”): This Old Testament God makes the grisliest tests to peoples’ loyalty, like when he asks Abraham to murder his son Isaac. As a kid we were taught to admire it. I caught my breath reading it. We were taught to admire it! What kind of sadistic test of loyalty is that, to ask someone to kill his or her own child? And isn’t the proper answer no? 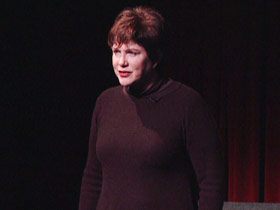 Ms. SWEENEY (during performance of “Letting Go of God): It was really hard to stay on Jesus’ side when he started saying really aggressive, just hateful things. In Matthew he says, “I come not to bring peace, but a sword.”

ROLLIN: Julia Sweeney is just one of a spate of nonbelievers who are speaking their minds these days and being heard. Three of them are writers with books on THE NEW YORK TIMES national best-seller list.

Evolutionary biologist Richard Dawkins’ book is THE GOD DELUSION. Dawkins, who insists there is no evidence for a creator or creation, is among the best known of the modern atheists and surely the most strident.

Dr. RICHARD DAWKINS (Biologist and Author, THE GOD DELUSION, speaking at book signing event): The God of the Old Testament is arguably the most unpleasant character in all fiction — a petty, unjust, unforgiving control freak; a vindictive, bloodthirsty, ethnic cleanser; a misogynistic, homophobic, racist, malevolent bully. 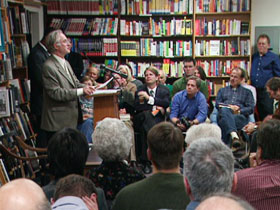 Dr. DAWKINS (speaking at a book-signing event): He suffered an assassination attempt in Rome and attributed his survival to the intervention of Our Lady of Fatima. A maternal hand guided the bullet. One cannot help wondering why she didn’t guide it to miss him altogether.

ROLLIN: A lot of non-religious fervor comes as a reaction to the religious right in America. But Professor Harvey Cox of the Harvard Divinity School feels Dawkins is behaving like some of them.

Professor HARVEY COX (Harvard Divinity School): I think of Richard Dawkins as the kind of Jerry Falwell of the atheists. I mean in a way he’s a kind of fundamentalist. I’ll explain why. He takes the most narrow and the most legalistic side of religion and makes that religion, and then he’s against it.

ROLLIN: Neuroscientist Sam Harris has written two bestsellers, THE END OF FAITH and LETTER TO A CHRISTIAN NATION, both emphasizing what he sees as the lack of evidence supporting religion. 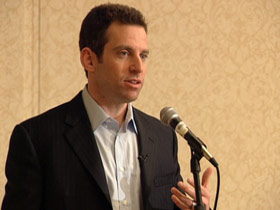 Dr. SAM HARRIS (Neuroscientist and Author, LETTER TO A CHRISTIAN NATION): The usefulness of religion, the fact that it gives life meaning, that it makes people feel good is not an argument for the truth of any religious doctrine.

(during speech): Faith is really the license that reasonable people give one another to keep believing when reasons fail.

ROLLIN: But Professor Cox thinks that scientists often miss the point that, unlike the material world, God is unprovable. 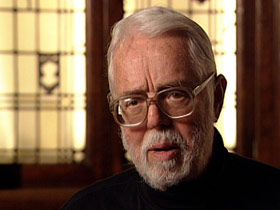 Prof. COX: It’s when they step over and scientists say, “There isn’t any God because, look, we can’t prove him.” Well, the canons of proof are not applicable to that question, and it’s not something that can be proved or disproved.

ROLLIN: And what about morality? Many people think religion is its only source. Sam Harris thinks otherwise.

Mr. HARRIS (during speech): If religion were the only durable foundation for morality you would suspect atheists to be really badly behaved. You would go to a group like the National Academy of Sciences. These are the most elite scientists, 93 percent of whom reject the idea of God. You would expect these guys to be raping and killing and stealing with abandon.

ROLLIN: Probably the gentlest of the professional nonbelievers is Paul Kurtz, a leader in the secular humanist movement.

PAUL KURTZ (Center for Inquiry): Secular humanists are defined not by what they’re against — we’re not nay sayers — but what we’re for, and we’re for a humanistic world in which some of the basic human values and principles have an opportunity to be realized. 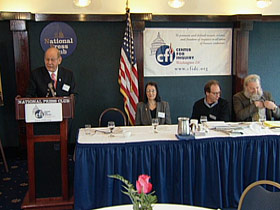 ROLLIN: Recently Kurtz’s group, the Center for Inquiry, opened an office in Washington to combat what they see as faith-driven public policy. They are particularly bothered by the federal ban on funding embryonic stem cell research and by the attacks on evolution.

Mr. KURTZ: We are concerned with the resurgence of fundamentalist religion everywhere and their alliance with political, ideological movements to block science.

ROLLIN: Harvey Cox says on balance he welcomes the current challenge from atheism.

Prof. COX: It always makes a comeback, I think, when religious people get too arrogant, when they begin to look as though or speak as though they know it all, when they begin to impose themselves in ways that are unwelcome to other people in the society. Then atheism is a kind of, for me, welcome critique of this arrogance.

ROLLIN: Atheists are not popular in America. Studies and polls show more than 50 percent of Americans hold a negative or a highly negative view of people who do not believe in God.

Julia Sweeney recalls her mother’s reaction to her atheism.

Ms. SWEENEY (during performance of “Letting Go of God”): Everybody knows that there are those few people out there who don’t believe in God, but they keep it quietly to themselves. Last night, your father said he even wishes you’d announced that you were gay. At least that’s socially acceptable.

ROLLIN: It’s not that these atheists expect to rid America of religion. But especially now they want their views to be heard, and they want more of a say in public policy.